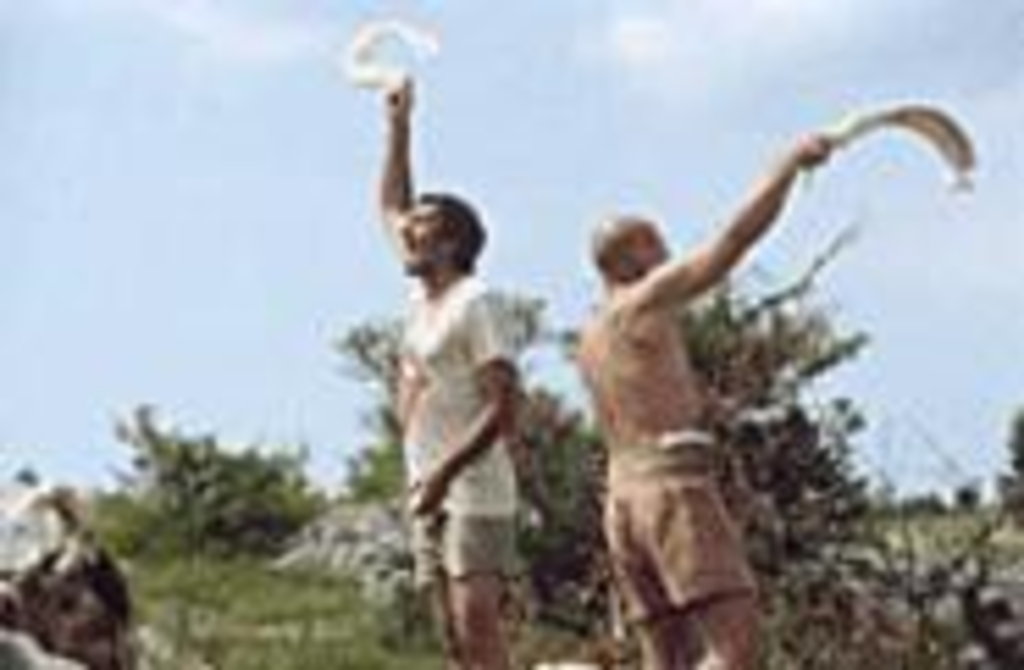 Part comedy, part tragedy and all bite, No Man’s Land (a Best Foreign Language Film Oscar nominee) damns and mocks in equal measure, painting a picture of war’s absurdity that should — but probably won’t — make peaceniks of us all. Although set in the former Yugoslavia during the Bosnian-Serbian war, the movie transcends its geography: Bosnian-born writer and director Danis Tanovic could just as easily have been talking about the Middle East, Northern Ireland, Rwanda, Afghanistan or any of a dozen other regions torn apart by long-standing ethnic and religious hatreds.

The film’s tone is established early when a small group of Bosnian soldiers gets lost in a fog. Huddled together, waiting for the air to clear, they talk. “What is the difference between an optimist and a pessimist?” asks Ciki (Branko Djuric). “A pessimist thinks things can’t get worse; an optimist knows they can.” Soon, of course, things do get worse: When the fog clears, a firefight breaks out between the Bosnians and a nearby unit of Serbs. Ciki survives by rolling into an open-air trench, a long, thin gash in the earth that lies halfway between the Bosnian and Serb military lines — no man’s land. Before long he is joined by Nino (Rene Bitorajac), a frightened, clumsy Serbian soldier who has been ordered to check out the foxhole.

Despite clearly being stuck in the same boat, the two men can’t stop hurling epithets at one another or trying to gain the upper hand. Any momentary shift in power proves a hollow victory, of course, since neither man can raise his head above the trench without getting shot at by both sides. Making survival even less likely is a third body in the trench, that of Cera, a Bosnian soldier lying on top of a bomb rigged to explode if he moves.

Despite orders from his superiors not to get involved, Marchand (Georges Siatidis), a French sergeant with the United Nations’ peacekeeping force, tries to help. When British journalist Jane Livingstone (Katrin Cartlidge) hears of the rescue attempt, she and a phalanx of other reporters race to the site, turning the event into a media circus.

Practically no one emerges unscathed in Tanovic’s cleverly conceived script. Antiwar rather than anti-Serb, it is a blistering attack on the ineffectual U.N., on the bloodthirsty media and on the warring factions themselves, whose similarities far outweigh their differences.

The ironies zing by. The U.N. regional commander, Colonel Soft (Simon Callow), claims he can’t act without orders from his superiors, a time-honored don’t-blame-me defense that allows everyone in the chain of command an excuse for inaction. If the film has a hero, it is Marchand, who is sick of being a bystander and rightly observes that “doing nothing to stop it is taking sides.” But even his efforts raise questions because he has to expend as much time and effort preventing Ciki and Nino from killing one another as he does trying to rescue the three men from the foxhole. Perhaps the film’s most delicious irony is reserved for the end and concerns the ambitious and self-absorbed Livingstone.

Most of No Man’s Land takes place in a 10-by-15-foot hole in the ground, yet the film feels neither stagy nor static, and it never becomes boring. In fact, it is consistently amusing, filled with small jokes, such as the German bomb expert who arrives punctually at 3:30, the exact time he is expected. The film reverberates with anger and intelligence, wit and despair. Hope is harder to distinguish, yet the very fact that Tanovic can still find humor is itself a hopeful sign. He rejects the label “black comedy” for his work, describing it instead as “a very serious film with a sense of humor.” It is an apt description for a remarkable film.