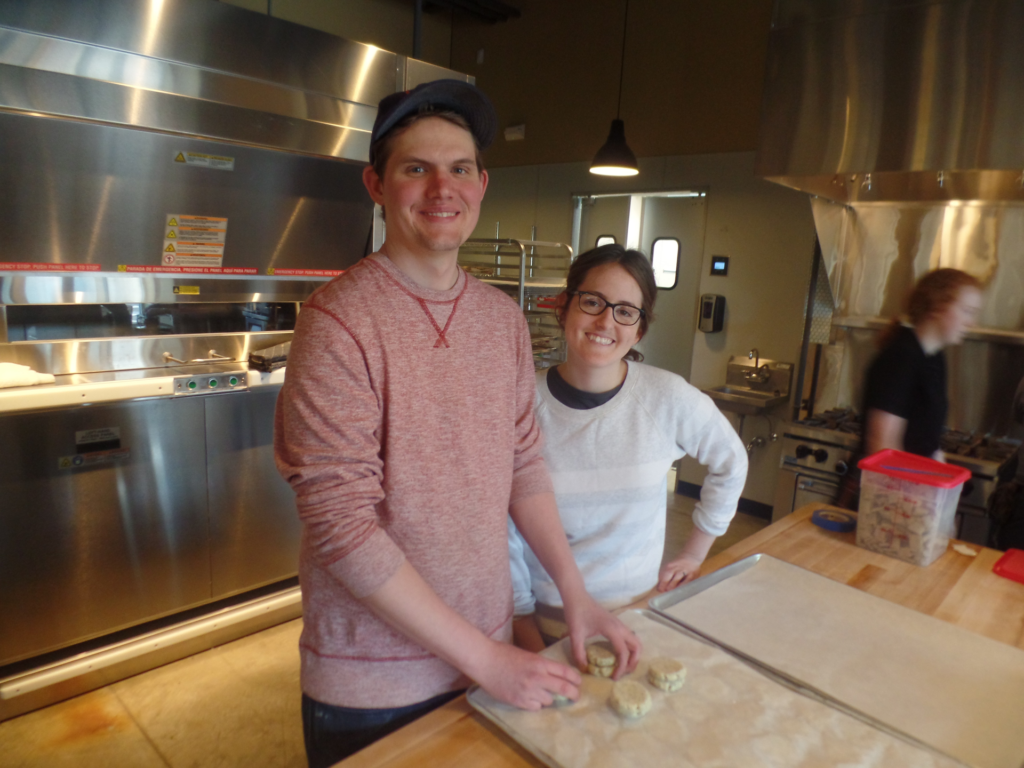 For the past few weeks, the young couple — Kate is 29; Scott turns the same age in a few weeks — have been working nearly day and night putting the finishing touches on their sleek new bakery operation at 401 East 63rd Street, the former gas station and used-car lot that they have beautifully transformed into a bakery and restaurant. The finished product is called Heirloom Bakery & Hearth, and although the grand opening is set for Saturday, they hosted a soft opening Thursday. Opening the doors at 7 a.m., they sold out everything they had put out by 4 p.m., except for a few loaves of challah bread. A second soft opening will be held today from 7 a.m. to 5 p.m.

It’s a good sign for the future success of a new business that has reportedly cost the entrepreneurs more than $400,000, including the complete renovation — with the assistance of John Anderson at Utilitarian Workshop — of an aging 1950s building originally designed for repairing cars, not baking cookies and crackers.

Heirloom Bakery & Hearth represents the changing face of a neighborhood in transition now being touted as “East Brookside.” Because the actual Brookside shopping district, several blocks to the west, can’t expand south or west, it only makes sense that the neighborhood east of Oak Street is becoming prime real estate for new businesses. The Meinkes like being part of this change: Kate Stueve Meinke grew up in this neighborhood and wanted the opportunity to return (they live several blocks away from the new bakery) after years of living in Washington, D.C.

The Meinkes met in D.C. after both had graduated from college — Scott majored in art history at American University;  Kate studied studio art at Drake University in Iowa — and Scott Meinke had fallen, unexpectedly, into a different career path. “I had always loved baking,” says the Oklahoma native, “but while I was living in Washington, I started working at the Spring Mill Bread Co. and fell in love with the art of baking bread.”

Breads will be the primary calling card at Heirloom Bakery & Hearth: sandwich breads, in particular. “This is a neighborhood with a lot of families, a lot of schools,” Kate Meinke says. Those breads and their freshly baked biscuits will also be featured in the breakfast dishes and lunch items that Heirloom will be serving six days a week, including a build-your-own breakfast-sandwich option.

Repurposed wood has been used to construct  the tables in the dining room (decorated with family photographs), and a curvy travertine marble coffee bar has been built in the main room for single diners who may just want to stop in for a cup of Thou Mayest coffee and a cinnamon roll.

In addition to the changing selection of seasonal breads, Heirloom Bakery will offer an array of sweets: muffins, scones, cinnamon rolls, pies and cookies.