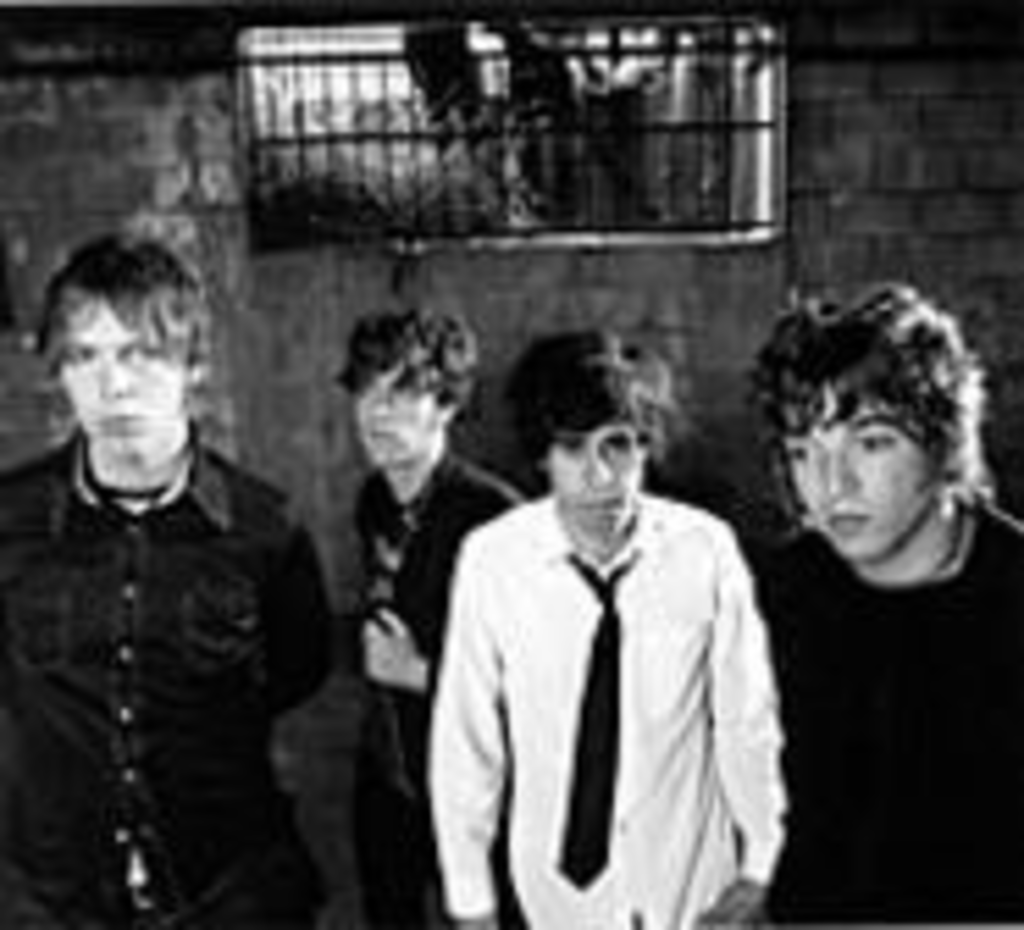 Burgeoning rock movements make strange bedfellows. Rip-hop hacks Limp Bizkit and graceful noisemakers Deftones have little in common but their nü-metal category, and though Pearl Jam shared the grunge umbrella with Nirvana, its arena-anthem bombast and earnest emoting was antithetical to that trio’s sardonic, pissed-off punk. The “rock revival” has become the latest genre to include incongruous bands, with the Strokes, White Stripes and Hives stuffed into an ill-fitting space intended to house all nonmetallic, guitar-based sounds. On the strength of its debut EP, Knock Knock Knock, Hot Hot Heat joined that crowd, despite the fact that with its disco-dynamite bass lines, frigid keyboard coolant and rhythmic riffage, it sounds nothing like the aforementioned acts.

Not that the Victoria, British Columbia-based quartet minds being associated with music’s next big things. “Much of the attention we get is a result of the popularity of these other bands, so I’m not going to complain,” guitarist Dante DeCaro says. In its skinny-tie wardrobe and triplicate moniker (similar to Strokes-approved sweethearts the Yeah Yeah Yeahs), Hot Hot Heat does look the part. Still, given the group’s ability to meld new wave’s synthesized glaze, club music’s gargantuan grooves and indie rock’s icy cool, HHH deserves more credit for originality. While its mussy-haired peers scoured garage-rock-sales for vintage hooks, Hot Hot Heat sweated in the lab to create a hellacious hybrid that makes power-pop danceable.

Or at least hypothetically danceable. It turns out that indie crowds accustomed to bobbing their heads and crossing their arms aren’t necessarily ready to engage in more elaborate choreography. The deep-driving pulse of HHH tracks like “Naked in the City, Again” could make a dead man move, but such beats haven’t stirred the atrophied audiences at America’s punk clubs.

“Most people don’t ever move that much,” DeCaro says. “At all-ages shows, there’s more of a response, because kids are into jumping around. The best way to get them moving is to completely ignore it and not let all the people standing still affect you.”

In his earlier musical projects, mostly punk and hardcore outfits, DeCaro set fans in motion by providing them with moshing fuel. Meanwhile, his future bandmates debuted at a Vancouver event called Surftoberfest in 1999, befuddling Dick Dale devotees with technically intimidating noise. Except for the keyboard involvement, this guitarless incarnation of Hot Hot Heat bore little resemblance to the current group’s sound. Two years after its first gig, HHH parted ways with its original singer, Matthew Marnik, shifted vocal duties to keyboardist Steve Bays and added DeCaro to the mix.

With Bays at the helm, the group became increasingly melodic. It still played its share of rough shows — regarding an opening slot for Skid Row, DeCaro deadpans, “They weren’t too stoked on us” — but the buzz started to build about the band’s new-fangled-wave approach. A work in progress, HHH would alter its instrumentation based on audience reactions, an approach that led it to decide on its rhythm-loaded sound.

Comparisons quickly centered on the Cure, mostly because of the similarities between Bays’ endearing whine and Robert Smith’s emotion-cracked yelps. The likeness extends to urgent minimalist riffs and hooks that haunt like friendly ghosts, but Smith’s squad isn’t HHH’s blueprint band. In fact, DeCaro says, its members “barely even listen to the Cure.” (Asked if HHH’s piano-peppered album-ender “In Cairo” was a conscious nod to the Cure, DeCaro responds with a puzzled “What would the reference be?” He’s apparently unfamiliar with the Cure’s “Fire in Cairo.”) One influence DeCaro will acknowledge is XTC, from which he inherits his disdain for static chords. Even more than HHH’s robust rhythm section, DeCaro’s constant guitar motion sets the band’s zippy pace.

After establishing its new identity, HHH mailed its demos, and one of the first labels to respond was Sub Pop, grunge birthplace and longtime home of many groups (Zen Guerilla, Hellacopters) that prove rock was never in serious need of revival. HHH played a showcase gig in Seattle, one of its first shows outside Victoria, and quickly moved high enough up Sub Pop’s priority list to share a bill with Mudhoney and the Shins at the label’s fourteenth-anniversary party.

HHH just released its first full-length, Make Up the Breakdown, which offers fewer short-attention-span stylistic shifts than its earlier EP but more catchy choruses. Irresistible as it is on record, HHH turns up the temperature on stage, speeding up its songs and adding exclamation points to the already emphatic hooks. “We’re a lot more hectic and intense,” DeCaro says. “The record is a more accurate example of the songs’ hearts but not their energy.” At the small clubs on its current tour, HHH’s fire should spread quickly, convincing fans to stop, drop and rock ‘n’ roll.