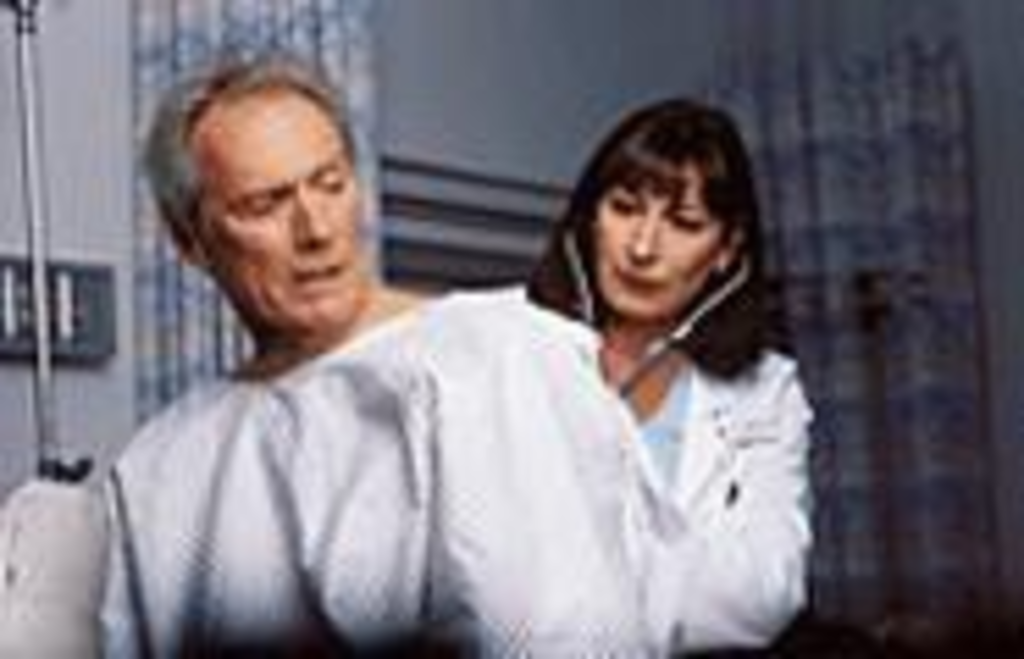 Blood Work, Clint Eastwood’s 23rd film as director, is another thriller in the mode of, but better than, True Crime (1998) and Absolute Power (1996), two of his last three films. More than these, however, it resembles In the Line of Fire (1993), the Eastwood vehicle directed by Wolfgang Petersen.

Hero Terry McCaleb is another variation on a character Eastwood has repeatedly played over the years — the brilliant but deeply flawed lawman. In this incarnation, he’s a veteran FBI profiler, absolutely sure of himself and enough of a publicity magnet that many of the cops he works with regard him as an arrogant grandstander — which may indeed be the case.

Eastwood is 72, and no matter how great the star looks, it’s reasonable to assume that McCaleb, whose age is never mentioned, is somewhere in that ballpark. So it’s not a big surprise when McCaleb, chasing a perp he alone among his fellow cops has spotted, suffers a major coronary.

We jump to two years later, sixty days after McCaleb has received a heart transplant. He is doing his best to take it easy, under orders from his doctor (Anjelica Huston). But his life and his convalescence are suddenly thrown into chaos when he is approached by Graciella Rivers (Wanda De Jesús), who wants him to investigate the murder of her sister, Gloria. When he protests that he’s retired and not fully over his surgery, she springs the zinger on him: It’s Gloria’s heart beating in his chest.

McCaleb can’t drive again yet, so he enlists the aid of Buddy (Jeff Daniels), a goofy, aging slacker who lives on the boat next door, and starts poking around, much to the aggravation of the already hostile LAPD investigators (Paul Rodriguez and Dylan Walsh) assigned to the case.

Taken from a novel by currently hot L.A. detective writer Michael Connelly, Blood Work benefits from the strength of the original material — its many initially aggravating coincidences and plot holes turn out not to be coincidences or plot holes at all.

Some of the plot elements recall In the Line of Fire: The opening scenes introduce a killer motivated partly by a personal obsession with the hero, the same sort of psycho symbiosis that Eastwood and John Malkovich shared in the earlier film. And both stories are powered by the hero’s sense of guilt.

But Blood Work isn’t up to the standard of In the Line of Fire, which was arguably the best crime thriller Eastwood has starred in since his days working with Don Siegel. (Tightrope, from 1984, would be the only real competitor.) It is flawed by some in-trusively obvious evidence and a few plot points established too heavy-handedly. Without giving too specific a hint, the most crucial of these will be instantly and painfully recognizable to anyone who works with words long before McCaleb figures it out, i.e., long before director Eastwood thinks the audience will catch on.

And the issue of McCaleb putting his heart in jeopardy — well, for all the times we see him rub his chest and start to show symptoms of trouble, we stop worrying after seeing too many stunts that would almost cause a heart attack in a healthy man twenty years younger — diving away from an oncoming car, running, fighting and otherwise abusing credibility.

For all this, the film still delivers the goods, in part thanks to Eastwood’s iconic presence and in part because of Daniels’ scene-stealing work in what could have been a hokey role. Sadly, the same cannot be said about Rodriguez, who is so awful that it would be remiss not to mention it.