He Will Bury You 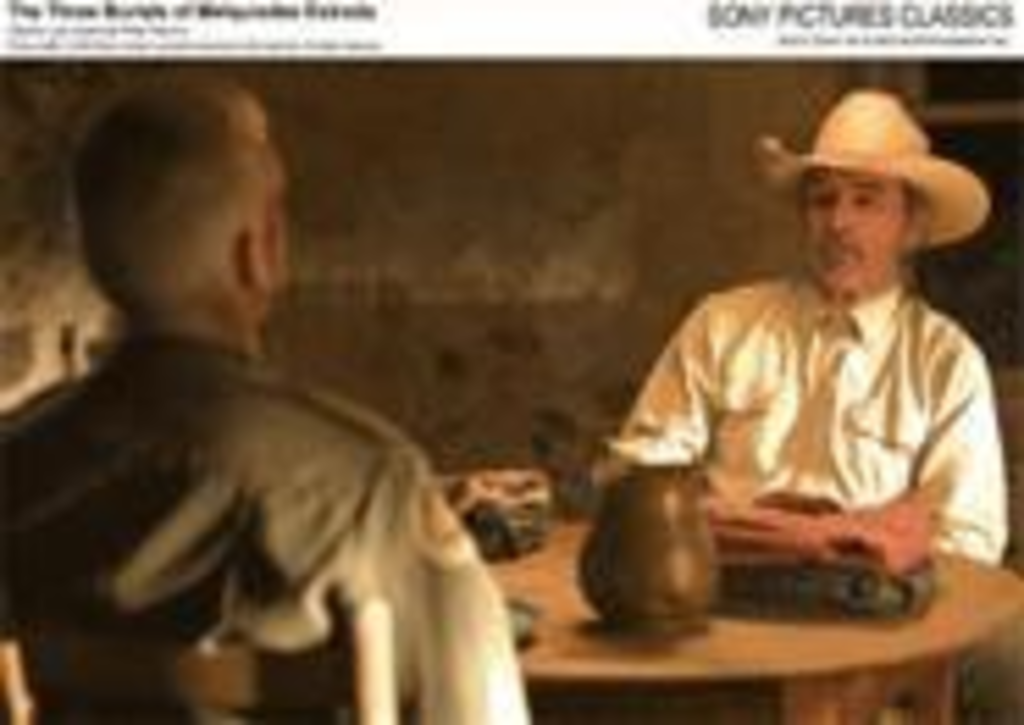 Tommy Lee Jones’ feature directorial debut, The Three Burials of Melquiades Estrada, opens with a desert panorama right out of the Sergio Leone playbook, but it’s not the Old West we’re watching. This is the new West, where the most pressing problem isn’t gunslingers but illegal immigrants.

Jones’ story, scripted by his friend Guillermo Arriaga, is based on a true story: In 1997, a U.S. Marine shot and killed an 18-year-old Latino goatherd. A financial settlement was reached in that case, but no one was ever formally charged. The shooter was Corp. Clemente Banuelos, a name that would seem to rule out racial motivation in the killing. Jones and Arriaga envision the fictional Melquiades Estrada’s assailant as a white border-patrol agent named Mike Norton (Barry Pepper), losing what would have been a welcome layer of ambiguity.

Jones also stars, playing a ranch foreman named Pete Perkins, who seems to be the only one bothered when Melquiades Estrada (Julio Cesar Cedillo) turns up dead in the desert. Meanwhile, we follow the settling in of border agent Norton and his wife, Lou Ann (January Jones). It takes awhile to realize that these stories are not taking place at the same time, nor is the one in which Melquiades arrives at Perkins’ ranch and the two bond in Spanish. Once you realize that Jones is playing around with chronology, his story is easier to follow and the inevitability of events becomes clear.

Norton is a brutal enforcer of border laws, but he doesn’t mean to kill — though we know he will. Once the first half of the movie is done, the timelines converge and become more linear. The first burial occurs in the desert, and the second is handled by the local authorities, led by asshole Sheriff Belmont (Dwight Yoakam). What they hadn’t reckoned on was Perkins’ promise to Estrada to return his body to Mexico if anything ever happened to him.

When he realizes who was responsible — and that no one is interested in disciplining the accidental killer — Perkins opts for some Texas-style justice to fulfill his original obligation. He will dig up the dead body and haul it back to Estrada’s hometown, bringing Norton with him and forcing him to confront the consequences. Most of the movie’s second half involves their journey through the desert with a decaying corpse.

Perkins is ostensibly our hero, but he comes off as deranged. (Jones never has trouble making his characters appear crazy.) Not especially skilled in corpse handling, he solves the problem of decomposition by pouring antifreeze down the dead man’s throat. Perkins keeps Norton tied up and relentlessly abuses him all the way down to Melquiades’ hometown, where Perkins’ intentions are, presumably, not benevolent. Even the most vehement Latino pro-immigrant activists may feel sorry for Norton before Perkins is done with him.

It’s hard to tell to what extent Perkins is supposed to command our sympathies. We’re told that he has a track record of being a nice guy, but the pounding that he administers to Norton finally seems gratuitous. There isn’t much that’s good about Norton, who bores his own wife during a goofy kitchen-counter sex scene (she watches TV while he rolls his eyes back in his head), but that doesn’t seem like enough to merit the nonstop beatings. Yes, he killed a man, but accidentally, believing that his own life was in danger.

Still, Jones’ film is memorable, and he successfully meets many of the challenges he has set for himself as director and star. The ending is in many ways unexpected, even slightly confusing. Jones and Pepper are no Clint Eastwood and Eli Wallach, but the fact that one even thinks to make such a comparison speaks highly of the work here.