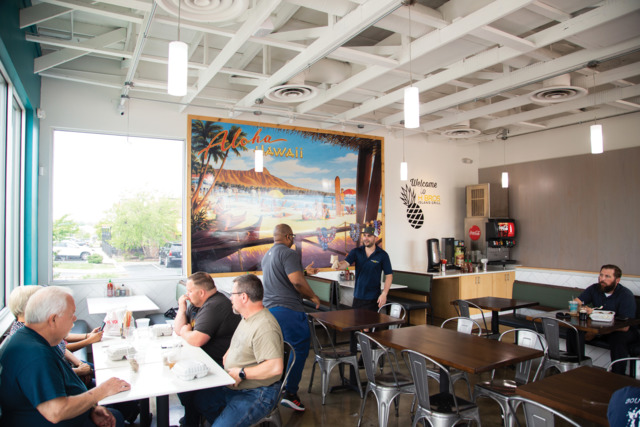 A few years ago, finding a Hawaiian plate lunch in Kansas City was nigh impossible. Now, the casual meat-and-sides meal is spreading like sugar cane.

Hawaiian Bros. Island Grill opened in Belton last year along a stretch of North Avenue peppered with big-boxes and chains. At the time, it felt like a gamble. The Midwest isn’t exactly the epicenter of island cuisine; Belton isn’t exactly the epicenter of metro dining. But diners flocked to the bright teal building and lined up at the drive-through window. The restaurant quickly expanded to a second location in Lawrence, and a third that opened in Overland Park in early June.

The name merits a disclaimer upfront: the “bros” in question aren’t Hawaiian. Brothers Cameron and Tyler McNie grew up in Oregon, where their family owned and operated a small chain of quick-service restaurants called “Hawaiian Time.”

That fact alone may be enough to set off alarm bells for cultural appropriation watchdogs. Doubly so when coupled with the interior of the restaurant, which conjures a tourist-oriented vision of an idyllic vacation island. The bright, breezy interior has an “Aloha from Hawaii” postcard mural (by California artist Kerne Erickson), cheesy-cute palm tree wallpaper, and a high-top table made from a gleaming surfboard. Diners can spoon through a Dole Whip — a soft-serve dessert that originated not in Hawaii but at Disneyland — while listening to pleasant, island-inflected coffee-house music with noodling steel guitar.

But this isn’t a story about white guys Columbus-ing. The McNies aren’t claiming to have “discovered” the Hawaiian plate lunch, nor are they “elevating” it with fussy, nontraditional adornments.

In other words: they aren’t giving it the poke treatment. 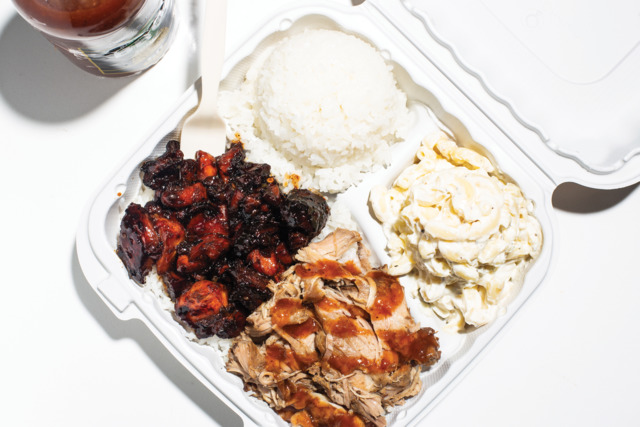 The plate lunch was built on cultural exchange. The meal emerged in the late 1800s as a quick lunch for pineapple plantation workers, many of whom had emigrated to Hawaii from Japan, Korea, and the Philippines. The protein varied accordingly, but the sides were nearly always the same: a dome of mayonnaise-based macaroni salad and twin scoops of white rice.

The plate lunches at Hawaiian Bros. are faithful recreations. The meals arrive in compartmentalized take-out containers that segregate the scoops of white rice and macaroni salad from the meats. Nearly everything on the menu is under $10, and portions are generous. I do not have a small appetite, and my “large” plate had enough meat and rice for two meals.

In some ways, the Midwest feels like a natural place for the Hawaiian plate lunch to land. The meal is humble, hearty, and unmoved by changes in seasons, with few fussy or hard-to-find ingredients. It snaps into Midwestern foodways like a LEGO brick. My meals at Hawaiian Bros. were streaked with odd, nostalgic flashbacks to funeral lunches in Iowa church basements (this is not a criticism: church basement food is a distinct genre with unassailable comforts).

Nowhere does this connection feel stronger than in the restaurant’s elemental macaroni salad: salty, not sweet, with a thick, tacky dressing that generously swaddles each firm noodle. The McNies’ version isn’t fancy. It’s exactly what it’s supposed to be. (Lily-gilders can grab a glass jar of the restaurant’s “rice seasoning,” a jade-green furikake mix heavy on the seaweed and sesame. It’s good shaken liberally on everything, but it’s especially good on the macaroni salad.)

I can already hear the self-proclaimed food snobs crowing, so I’d like to say a few words about mayonnaise-based pasta salad. Is any food easier to dunk on? Is any dish less likely to appear on the menu of a trendy, small-plate awards magnet? And yet despite the opprobrium, the dish is unbeaten in crowd-pleasing comforts. It’s a ruthlessly efficient vehicle for everything I crave: salt, fat, refined carbs, a flimsy pretense of greenery.

That may be one reason why the Hawaiian plate lunch hasn’t spread as rapidly across the mainland as other island exports. The dish seems so unhip — so far removed from the “foodie” brand of aspirational eating — that writer Mitchell Kuga proclaimed the plate lunch “impervious to food trends” in Saveur last year. (Kuga also called the dish “un-Instagram-able,” which seems to me to both over- and underestimate the #influencer set.) 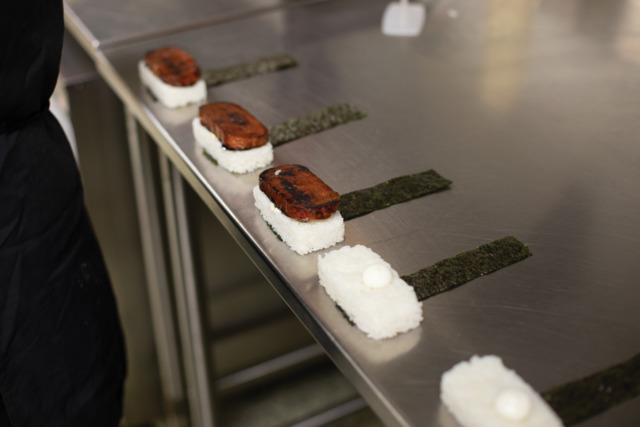 Grilled Spam and sushi rice are tied with slender strips of nori to make the Spam musubi.
Zach Bauman

But day laborers and working-class cooks have always found ways to make magic with less “fashionable” ingredients. Hawaiian Bros. nods to that legacy with its Spam musubi: a thick slice of grilled Spam affixed to a brick of sushi rice with a daub of mayo and a drizzle of teriyaki sauce. The whole package is encircled in nori like a napkin ring. It’s perilously cute, and it also happens to be delicious. Each serving arrives tightly wrapped in cling film, which both preserves the structural integrity of the brick and gives it the appearance of a grab-and-go gas station snack — which, in Hawaii, it is. At $2.50 a serving, it’s also a good value. Though I polished my musubi off in a couple impolite bites, the combination of rich meat, firm rice, and salty-fatty sauce left me feeling full before my plate lunch arrived.

The first plate lunch I tried was the Huli Huli Chicken: a competent, if unadventurous take on teriyaki chicken. The bite-sized pieces of grilled chicken thigh were tender, and the mild, thin sauce rightly skewed more savory than sweet. The Honolulu Chicken had a slightly thicker sauce, though it wasn’t much bolder. A heavier hand with the supporting players — garlic, green onions, sesame seeds — might help the dish stand out.

Restraint was a boon to the Luau Pig: tender morsels of pulled pork clothed only in a light perfume of smoke. If you prefer saucier pork, the restaurant offers two proprietary bottles: a teriyaki sauce (it’s fine; it’s teriyaki sauce) and a pineapple barbecue sauce (oversweet but solidly spiced).

But my favorite of the proteins was the Molokai Chicken. Each morsel was judiciously coated with a slightly smoky and faintly sweet sauce the color of burnished mahogany. The version I tried had a slight, G-rated kick to it, as though it had recently kissed a jalapeño on the cheek. (The restaurant’s take-out menu notes that the dish can also be ordered “HOT.” I’ll go this route next time, and I fully intend to order it again). 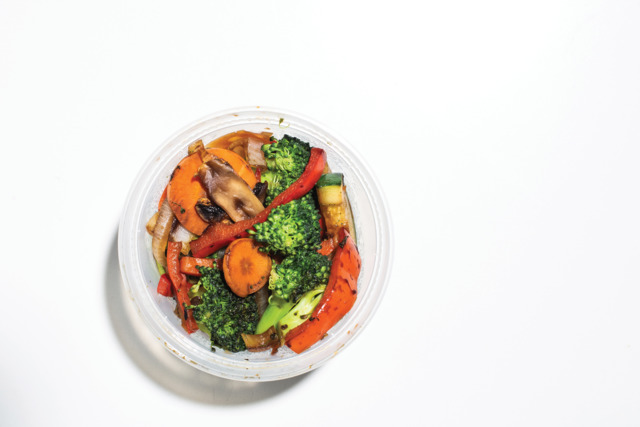 The meats are plated on top of a thick bed of rice, making the scoops on the side seem like overkill. For a modest upcharge, you can swap grilled vegetables for one or more of the rice scoops, and I recommend this route unless you’re a famished farmhand. The vegetables were better than I expected from a quick-serve restaurant. On one visit, I sampled a politely charred, teriyaki-kissed mix of broccoli, zucchini, mushroom slices, and chubby strips of onion and red pepper.

This is the curious draw of Hawaiian Bros.: nearly everything is better than I expect from a quick-serve restaurant. The counters are gleaming and spotless, the single-stall restroom is the size of a dance studio, and the young staff members seem genuinely delighted to be there. On my second visit, I watched a busy cashier deliver doll-sized cups of the day’s Dole Whip flavors to a table of preteens unbidden. “I just thought you might like to sample these while you wait,” she chirped. They did.

About those Dole Whips: I’ve had the Disney version in Orlando and find this one to be a faithful recreation. The dairy-free dessert has a texture somewhere between Cool Whip and ice cream, with a soft, subtle pineapple flavor. The flavors rotate, and you can swirl the pineapple with the fruit du jour, but the unadulterated original is the best introduction.

The weak spots in an otherwise strong menu are the sandwiches, which heap one of the restaurant’s signature proteins on an enormous sweet Hawaiian bun. The insides of the soft bun were smeared generously with a spread that tasted like mayonnaise but had the unsettlingly white color of correction fluid. The Huli Huli sandwich was messy, and the Luau Pig was even messier. Both sandwiches quickly devolved into Slip ‘N Slides of sauce.

Still, I’ll sacrifice a few napkins to the McNies’ brand of convenient comfort food. Skeptical though I am of most rapid restaurant expansions, I can’t deny Hawaiian Bros. has nailed the business plan. The restaurant is fast, frugal, and, perhaps more crucially, fun.

It’s also probably expanding to a suburb near you. Cameron McNie told me by email that the Bros. are working on a fourth location in North Kansas City (and eyeing a few other spots as well). The Hawaiian plate lunch, it seems, is winning over landlocked diners. It may not be so “impervious to food trends” after all.