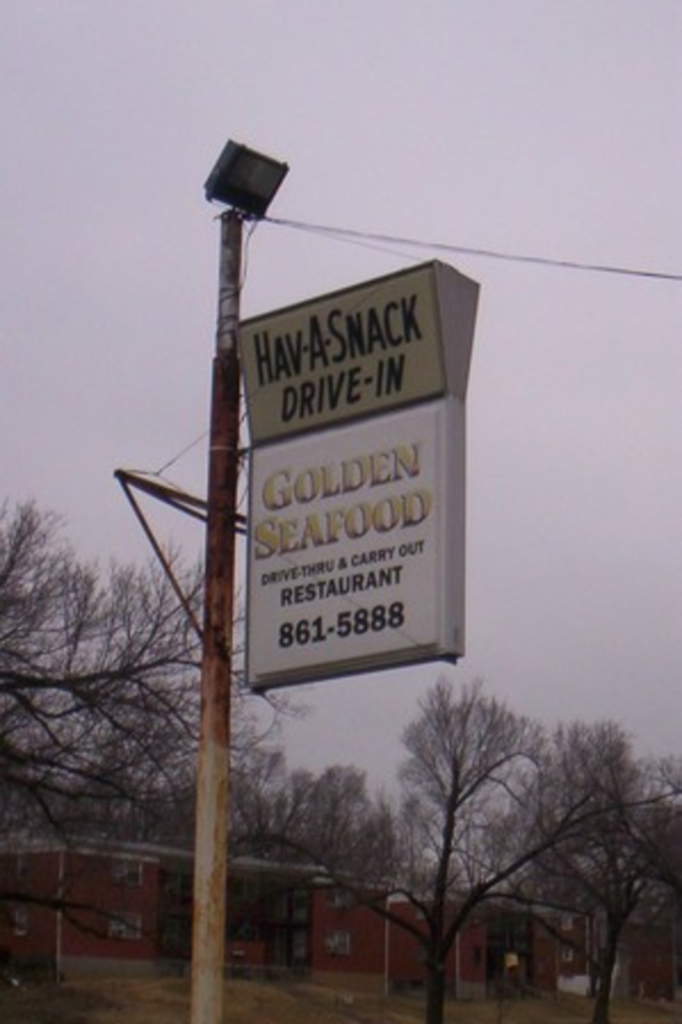 File this under “Places I Wish I Had Eaten When I Had The Chance — Before It Was Too Late.”

My friend Bob was a huge fan of the old-fashioned drive-in, Hav-A-Snack at 2641 Van Brunt Avenue. He insists they used to sell the most delicious cheeseburgers on the city’s east side.

Now I’m not sure if Hav-A-Snack ever had carhops, like Clem’s or Mug’s Up in Independence (or, yes, all the Sonic restaurants) or if it was just a classic drive-in like Teresa’s or Harold’s, where you drive up, get out, go into the joint, get your burgers and go home to eat them.

It was in the latter category when Bob used to go there a few years ago and he was amazed by the fact that the place was still there. “It was like walking back into the 1960s. I wish it was still there now.”

The building is still there and so is the original sign, but Hav-A-Snack is now Ray’s Golden Seafood Chinese Fast Food. I stopped in the other day for some hot-and-sour soup and an order of eggrolls. They were very cheap. There are eleven shrimp dishes on the menu, all priced under $6. They sell deep-fried shrimp too — with or without french fries.

I ordered from a very nice lady standing behind a thick panel of plexiglass. I noticed, in the kitchen area, a shrine set up to Buddha right next to a stainless steel refrigerator. There was another deity of some kind on top of the refrigerator.

There are two tables in the tiny lobby area, but I didn’t stick around. The lady did give me an extra fortune cookie with my order. “For extra luck,” she told me.

I wish they had named the restaurant Hav-A-Fortune.