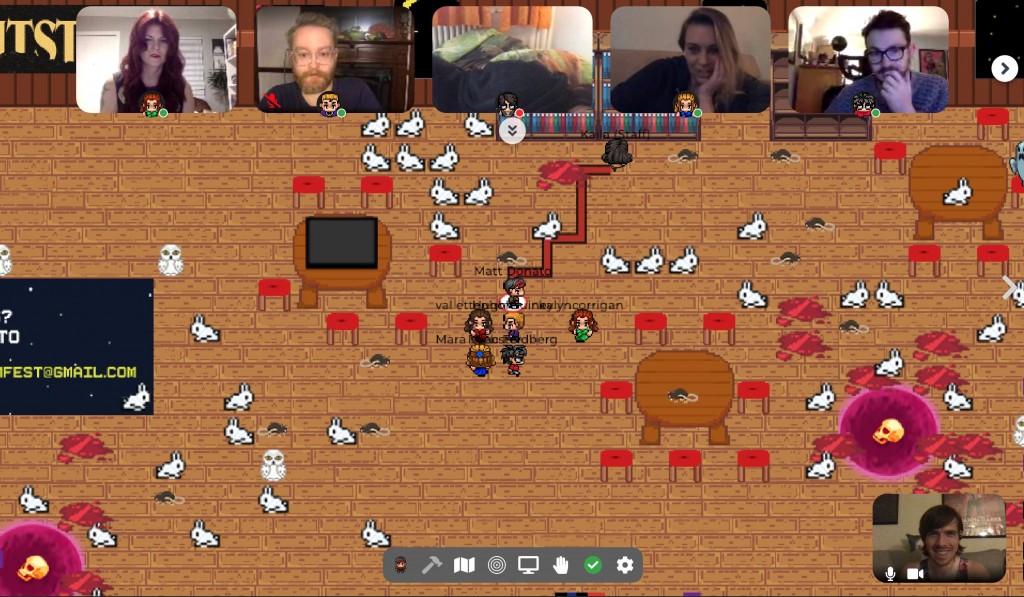 Having spent more than a decade in entertainment journalism, the two biggest hits to my 2020 were the loss of live concerts and film festivals. Bands have started doing livestreams, which rules, because I spent $15 on Friday to see one of my favorite bands do a full set. My dog was able to sit on me throughout the whole thing and the booze was reasonably priced within my own home. Films and film festivals have been having a harder time finding a good way to translate into The New Stupid Normal.

This isn’t to say that festivals haven’t happened digitally—some, like Fantasia Fest, have been quite good. At least insofar as the lineup of films is accessible and contains talented creators. But the “festival” vibe has been painfully absent. Until this last weekend, when someone got it right.

With the cancellation of a number of festivals planned for 2020 and early 2021, there was a stockpile of exceptional titles that were simply never going to see the light of day in the near future. Rather than deprive these films and filmmakers of a chance to shine, these genre fests came together to create a nonprofit event and pool their films in one space. Nightstream was born from the ashes of Boston Underground Film Festival (MA), Brooklyn Horror Film Festival (NY), North Bend Film Festival (WA), The Overlook Film Festival (LA), and Popcorn Frights Film Festival (FL).

Fittingly, the fest announcement included this quote from Mary Shelley’s Frankenstein: “It is true, we shall be monsters, cut off from all the world; but on that account, we shall be more attached to one another.”

“The genre film community is not defined by our physical proximity to theaters,” the official announcement statement says. “It is our love of film in all its forms that binds us and will continue to keep us close. Now is the time to reimagine the future of festivals, our future, and what can be achieved through cinema. Let’s do it together.”

While the line-up of films has been a delight (many reviews are inbound), the surprise cherry on top was that Nightstream found a way to replicate the part of the festival experience that I had so dearly missed: a physical space. Sorta.

Using a platform called Gather, they were able to create a video chat system based within a JRPG video game-esque imaginary bar space. Each person tagging in is allowed to create a little Nintendo character and move around the space. When your character is within proximity of other people, that’s when you can see and hear each other over video chat. Not only was this a great way to build a small hang-out space, but it was a chance to turn the Gather space into its own adventure. By traveling through hidden passages, you could find innumerable secret rooms, based on horror touchstones like The Shining or Twin Peaks. Just unending small delightful details, that would spiral further into madness over the course of the fest.

“In these strange virtual festival times, we felt that it was important to provide a space that was as close to a real-life fest experience as possible,” says Jess Byers, North Bend Film Festival Co-Founder. “Gather felt like an awesome way to accomplish this, while allowing us to stretch our creative muscle to build out a world and experience that we felt proud of presenting to our audience. Gather has a pretty rad map builder that allows you to upload a background space and attach rules to the world. We had fun throwing together different space and interactive features for the audience.”

It was a little jarring at the start, and festival organizers had to stand near the entrance to explain where I was supposed to go. Within minutes, it felt like I was home again, in the festival world.

As virtual festivals attempt to replicate the feeling of social interactions between screenings, I think @NightstreamFest found the answer. Love the platform, and, like, seeing people's faces! pic.twitter.com/Ep6CH1cgA7

“At first when someone pops in, you can tell that they’re a bit nervous to connect with strangers after months of quarantine,” says Byers. “But after warming up to the space people engaged and hung out in there for hours on end.”

This meant that we could also revive that wonderful moment of cornering a guest filmmaker at the bar after their film premiered.

Now the film festival experience may seem like something untethered from what might matter to anyone who, say, isn’t attending a film festival. The first part of this is that there is something about film reviews, of which I know you love to read based on our site traffic, which is made better by the presence of others. While it’s impossible to get the experience of watching a film with a theater full of like-minded fans, the energy of the post-show chats was accurately replicated. I hung out with other critics and shot the shit about what we’d seen—occasionally challenging each other on our initial reactions. Which has always been a vital part of the fest experience to me. Nothing like hearing how something clicked with someone else to maybe help it click for you.

The other part of the experience was running into folks from across the country, from my very small film bubble, that I wouldn’t normally get to see this year. I bumped into The Pitch’s music editor Nick Spacek right off the bat. Then I stumbled into critic Matt Donato, who I have never actually spoken to “in person” despite being friends for years. While I was hiding in the corner of a bar near a haunted skull that transported folks to a nether-realm, I was cornered by KC’s own Tim “KC” Canton, one of the dudes who runs Panic Fest. I haven’t chatted with him “face to face” since January… at Panic Fest.

This also meant that you could pull out some drinks and stick around, talking shit with pals, way too late into the evening. Just like we used to.

Honestly, the fact that I can "close out" a venue at a festival while "meeting" mutuals for the first time (@aandeandval) is giving me an energy I've been desperately missing.

And yes, that does mean that friends like Kaila Sarah Hier might have gotten drunk enough to pass out… on camera. Honestly, this was the moment when it truly felt like I was back where I belonged. This made it all too real.

Thank you Matt for capturing me passed out while at the virtual bar (that’s me in the middle) https://t.co/2nHVmBo2tx

Anyway, the reviews from the fest will be flooding in. And I think they’re better thanks to this social experiment. But also maybe if you’re planning an upcoming event, take the time to make a weirdo Gameboy world for your pals to hang out in, via Gather.