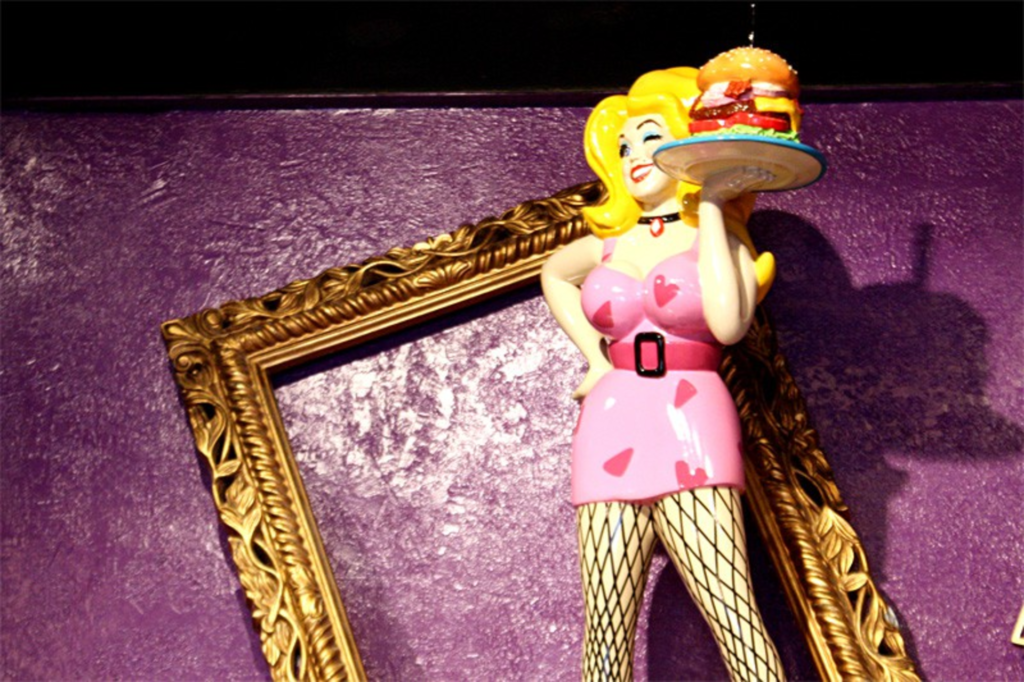 It’s here, it’s queer and it serves beer: Hamburger Mary’s, a restaurant that does for America’s favorite sandwich what Liberace did for classical music. It’s flamboyant in every sense of the word, right down to the color of the building. Previously home to Smokin’ Joe’s Bar-B-Q and, more recently, a short-lived boxing-themed bar, the building where Southwest Boulevard meets Baltimore in the Crossroads is now the color of a grape-flavored all-day sucker. And if the violet exterior doesn’t come right out and scream “queen” (or something like that), the awning over the entrance says it all: “Eat, drink … and be Mary.”

Enough decades have passed since The Boys in the Band, which introduced straight-laced Americans to smartly dressed homosexuals calling each other “Mary,” that the term seems quaintly antique. (It’s a slangy reference dating back to the early 1900s.) But the joke lives on at Hamburger Mary’s, where one burger is called the Black and Bleu Boy, and another is the Big Johnson. There hasn’t been a restaurant this ambitiously and openly gay since Sara Crankankles, a midtown bistro of the 1980s, where all the servers were drag queens.

On one of my visits, we were escorted to a table by a statuesque African-American hostess in a blond wig and cherry-red lipstick (but with biceps like Arnold Schwarzenegger’s). Waiters are all in male garb and as cherubic as altar boys, but at least one of them will happily show you cell-phone photos of himself as his stage persona, Valerie Versace. “Honey, you look just like a young Cher!” Truman gushed.

Cher, the real, old one, is one of the musical artists playing in videos on TV monitors mounted around the dining room: Cher, Madonna, Mariah Carey, even ABBA. The place is loud, raucous and super-friendly. “But is it too gay for Kansas City?” Truman whispered. After all, the Hamburger Mary’s chain started in San Francisco. There’s not one in the city by the bay anymore, but there are franchise restaurants in West Hollywood, Palm Springs, Chicago, Las Vegas, San Diego, Phoenix, Cincinnati and Cedar Rapids. And if Cedar Rapids can handle one, by god, we can, too.

Just to be sure, though, I posed the question to the restaurant’s owner, a local surgeon named Eric Christensen. He told me that he was eating at the West Hollywood Hamburger Mary’s several years ago and saw a table tent with information about franchising the concept. Right then and there, he decided that Kansas City had to have one. After hiring Robbie McGowan away from Café Trio to manage the new place, Christensen finally opened the local outpost in December.

“Our first test of customer acceptance took place during [February’s] First Friday,” Christensen said. “We watched quite a few straight couples come into the restaurant to look around. A couple of them left, but most stayed and had a ball. That’s how this restaurant is going to catch on.”

The restaurant is also likely to be compared with the city’s best-known high-end burger purveyor: Blanc Burgers + Bottles. It’s not a fair comparison because Josh Eans’ slightly more expensive Blanc is truly upscale. Hamburger Mary’s is an old-fashioned diner — former Otto’s Malt Shop chef Otto Miller oversees the kitchen, and talented Mike McGuire is the sous chef — with an in-your-face attitude. And booze. And one spectacular-­looking female bartender, the sultry Danielle Metz, who does an emotionally charged version of “Let It Please Be Him” on karaoke nights.

The burgers are big, juicy, cooked-to-order and satisfying. If they lack Blanc’s serious creativity, they’re at least as good as the kind you make at home or order at a really good truck stop. A couple are way over the top, like the Big Johnson, which has a meat patty stuffed with jalapeños, green chilies and onions, then topped with cream cheese, Swiss, Jack and Cheddar cheeses, bacon and a fried egg. But I’ve liked every burger I’ve eaten there, including the Barbra-Q Bacon Cheeseburger and the Rock Star (stuffed with Gouda, green onion and roasted garlic). And the patty melt is first-rate.

As a franchise owner, Christensen was allowed to tinker with the menu to a certain degree, and he should probably have given McGuire a little more flexibility. Besides all the burgers, the menu currently lists only four entrées, including a vegetarian offering of sautéed seasonal vegetables served with rice, black bean salsa and grilled pita bread. That didn’t sound very interesting to me, nor did a pasta special that seemed to be the same whenever I was in there (something with marinara sauce and blue-cheese-stuffed meatballs). But I did force myself to order a pan-seared tuna entrée called the Ike & Tuna, and it turned out to be a beautifully grilled hunk of ahi tuna glazed in a ginger-soy reduction and served with real garlic mashers.

Truman ordered the meatloaf dinner one night and raved about it. “And I’m not even that crazy about meatloaf, you know.” He also ate every single sweet-potato fry, insisting that they were fresh, hand-cut fries. They’re not. (McGuire later told me that they tried at first, but it was too labor-intensive.) But I was impressed that Truman believed they were.

It’s not easy to have a conversation at Hamburger Mary’s because the place throbs like a disco even during the lunch shift. But our servers were more than agreeable about turning the volume down a bit on the afternoon I brought a friend who is slightly hard of hearing. An elderly gentleman, he looked up from the menu at one point and shouted, “Does this place have go-go boys?”

After blushing, I shook my head. No, but the waiters do dance around the dining room a bit in an enthusiastic manner. “They all shake their rear ends to get customers in the mood for hamburger buns,” Truman proclaimed. Heather was quietly eating a hefty bacon, lettuce and tomato sandwich topped with a dollop of guacamole to make it, yes, a GBLT sandwich. Finally she turned to me and said, somewhat hesitantly, “It’s very festive, isn’t it?”

“Mary,” Truman guffawed, “you don’t know the half of it!”

By then it was time for dessert. The menu lists only a few, including deep-fried Twinkies. I couldn’t bring myself to order those — I mean, after you’ve tasted one deep-fried snack cake, the novelty is positively over — but Truman was eager to sample the Crispy Snickers banana split. After the server brought it to the table, he deemed it “the most phallic confection ever served in the history of Kansas City.”

Yes, it’s a banana split, but with two scoops of ice cream, vanilla and chocolate, at the base of a firm banana slathered with chocolate, caramel and raspberry sauces. There’s an eruption of whipped cream on top, along with a dash of chopped nuts and a shiny cherry. Finally, chopped Snickers bars are wrapped in won-ton sheaths, deep-fried and artfully arranged around the banana.

I didn’t think this silly spin on an ordinary soda-fountain dessert was that great, and by this restaurant’s standards it was expensive, too. I hope the kitchen staff can come up with something more memorable — or at least less predictable.