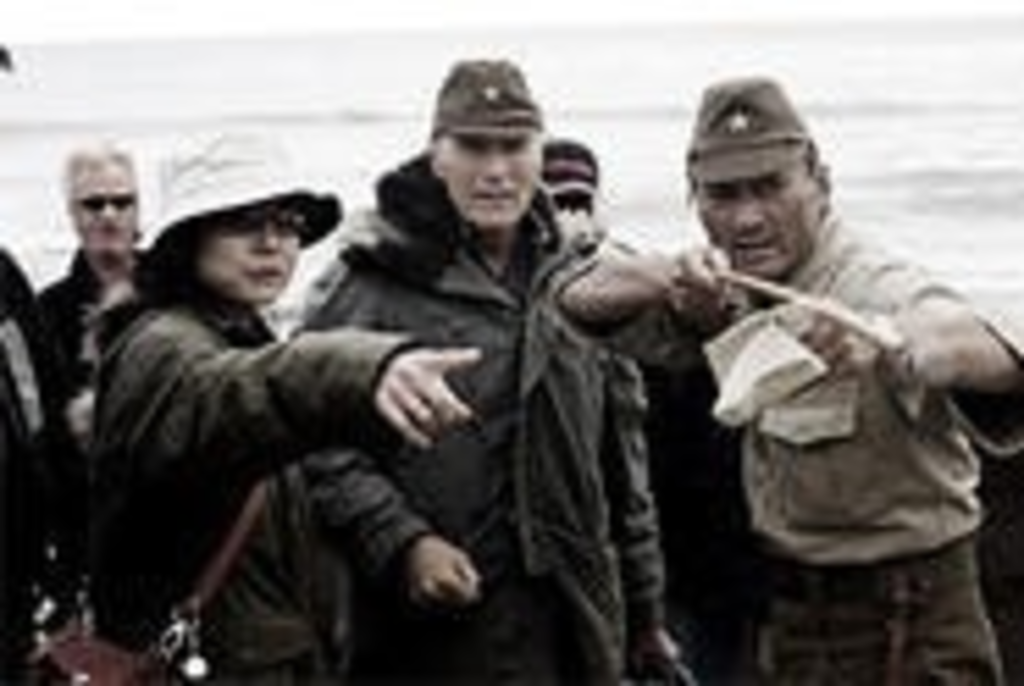 On an early December afternoon at the offices of Malpaso Productions, Clint Eastwood’s four Academy Awards have been placed into thick velvet carrying bags, and that famous poncho — the one Eastwood donned for Sergio Leone’s Dollars trilogy — is being folded into a large shipping box. But that doesn’t mean that Eastwood himself is packing it in. The memorabilia in question is merely being lent to the California Museum in Sacramento, where Eastwood has just been inducted into the California Hall of Fame (part of an inaugural class that includes César Chávez, John Muir and Ronald Reagan).

“Will I ride off into the sunset? Maybe. Will I be dragged off kicking and screaming? Probably,” he told me back in 2004, when I came here to interview him just prior to the release of Million Dollar Baby. And in the full spirit of those words, he spent much of the intervening two years devoted to the biggest, most ambitious project of his six-decade career.

That project was a single film, Flags of Our Fathers, about the American soldiers who fought at the Battle of Iwo Jima — one of the bloodiest of World War II — and how they later became cogs in the war effort’s well-oiled propaganda machine. Then, during preproduction, Eastwood had a thought: What about the Japanese troops who fought so bravely to defend those 8 square miles of volcanic terrain, 20,000 of whom died in the process? The more Eastwood thought about that, the more he couldn’t stop thinking about it, until he found himself at the helm of a second Iwo Jima movie, this time told from the other side of the front lines, filmed with an all-Japanese cast and all-Japanese dialogue. Now, on the eve of Letters From Iwo Jima‘s debut (the film will likely open in Kansas City in late January), Eastwood once again sits on a dark-horse Oscar contender — it’s hard to imagine any other American filmmaker (save perhaps Steven Spielberg, who served as Eastwood’s producer on both movies) managing to get it made.

“I just thought it would be good to tell the whole story,” Eastwood says with typical nonchalance. He was particularly drawn to the figure of Lt. Gen. Tadamichi Kuribayashi (played in Letters by Ken Watanabe), the Japanese commander on Iwo Jima who, prior to the war, traveled extensively throughout the Americas, logging time as a military attaché in Washington, D.C., and as a student at Harvard. Kuribayashi’s lyrical dispatches back to his wife, daughter and son, published in the book Picture Letters From Commander in Chief, provided the connective tissue for the Letters screenplay (by first-time Japanese-American screenwriter Iris Yamashita). “The book doesn’t say very much — it’s just his letters home and these little sketches he made of himself and the people he saw,” Eastwood says. “But you can see that he was a very concerned father, worried about his kids, their academics, their spelling, telling them he’s going to fix certain things when he gets home, that he can’t wait to see them, that he wishes he was there. All the things that a normal husband and father would do, anywhere in the world.”

That humanizing view of “the enemy” is central to Letters, which, like Flags, unfolds from the perspective of the low-ranking conscripts whom Eastwood calls “young men asked to live a very short lifetime.” As the war in Iraq nears the start of its fifth year amid talk of a renewed military draft, Eastwood, who tends to be terse with regard to his films’ thematic implications, says the contemporary parallels aren’t lost on him. But with their reciprocal depictions of wartime rhetoric and thoughtless atrocities committed against POWs, Flags and Letters seem less an anti-war diptych than a troubled inquiry into the moral relativism of the battlefield. As handily as Unforgiven muddied the mythology of the classical western, Eastwood’s latest films shatter the clear-cut notions of heroism and villainy that are ingrained in almost every Hollywood war movie, including Saving Private Ryan.

“At some point, you have to get real about things,” Eastwood says. “That may not be appealing to audiences who want a kind of escapism, but these pictures aren’t necessarily for the escapist.” He’s right: Audiences did not embrace Flags, which has performed well below Eastwood’s usually robust business since its release in mid-October. Eastwood admits that he’s disappointed but says he doesn’t have anything left to prove to anyone, save for himself. “All you can say in the end is, Do I like it? Yes. It’s what I intended to do, and because of that, I’m happy.”

Indeed, Eastwood seems content, and with no new projects in development, he says he’s interested only in making films that ignite his passions as fully as the Iwo Jima saga. “When you’re younger and things first start happening to you — for me, it was the 1960s — you say yes to a lot of things. Your agent says, ‘Do this, play in this picture because you’re in it with Richard Burton.’ Then someone asks Richard, ‘Why are you in the picture?’ And he says, ‘Well, because I’m in it with Clint.’ But why are we here? I did a lot of pictures like that. You could go through a whole list of them. People lean on you, and, like all actors, you think every job’s going to be your last job. At that age, you don’t wait for the perfect thing that may or may not come along in 10 years. But now, if this is the last picture I do, that’s fine.” year in film