Guy Fieri’s Dive and Taco Joint has arrived, and here is our review of it 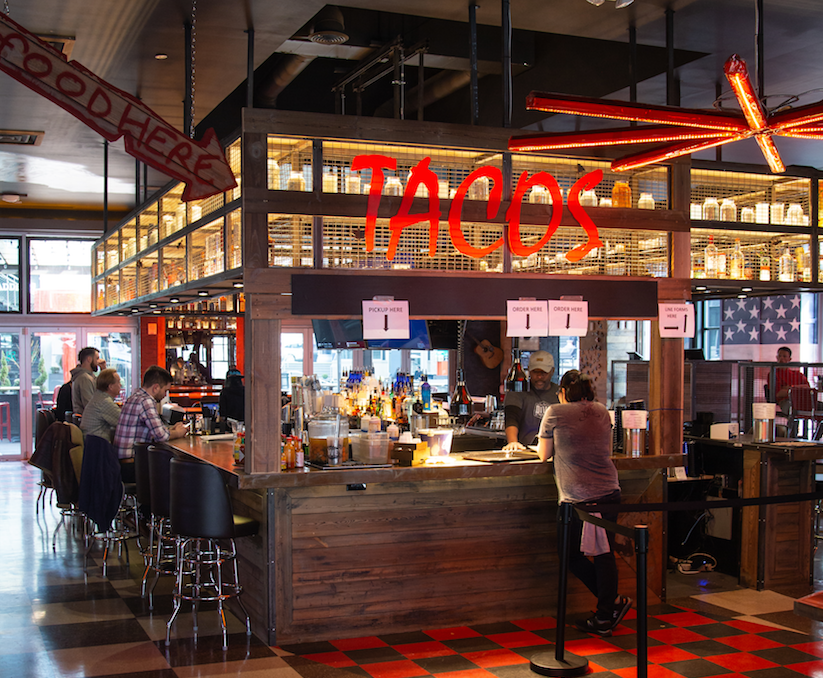 When is a man more than a man? When he’s a Guy — Fieri, to be precise, the Food Network star and latest celebrity to slap his name on a restaurant in the Power & Light District.

It’s impossible to visit Guy Fieri’s Dive & Taco Joint without grappling with Fieri’s polarizing, maximalist mythos. To some, Fieri is endemic of everything wrong with the American way of eating — with Americans in general, maybe. Everything about him is extra, from his frosted tips and wraparound sunglasses to his candy-red Camaro convertible to his Chad-Kroeger-meets-Lucifer goatee to his Dad-lite pronunciations of Worcestershire (“wa-shashashashasha!”)

To others, Fieri is the last rock-n’-roll Unicorn in a world of fussy show ponies. Just his name is enough to serve as a balm, as a promise: this is a place for you. This is a place where guys can be Guys. Where they can scarf burgers and giggle and belch free from the food snobs and the clean-eaters and the pleasure-policers. A place where satisfaction isn’t just an address but a zipcode: Flavortown.

Imagine my disappointment when Guy Fieri’s Dive & Taco Joint turned out to be not a haven for excess and food-world id but just another hastily assembled corporate restaurant churning out tepid food in a concept too thin to fill out Fieri’s bowling shirts.

Guy’s Dive opened in February in the cavernous Grand St. anchor space recently vacated by Cleaver & Cork. The vibe is “heartland truck stop meets strip club adjacent to heartland truck stop.” One wall is painted with an enormous American flag; the other glows with brand-new neon signs blaring slogans like “Namasté Bitches” (acute accent not mine) or “Don’t Do Coke in the Bathroom.” Everything else is bathed in a hellish orange light that makes you feel as though you’re living inside a heatlamp.

I would have preferred a literal heatlamp. Much of the food I sampled arrived at an uneasy room temperature. The cubes of underseasoned chicken on my “Achiote Chicken Tacos” were actually cold. The “Diablo Shrimp Tacos” had an appealing chipotle-lime aioli, but the shrimps had a crumbly, canned texture and the flabby-flimsy appearance of a depressurized Sea Monkey carcass. They, too, were lukewarm. 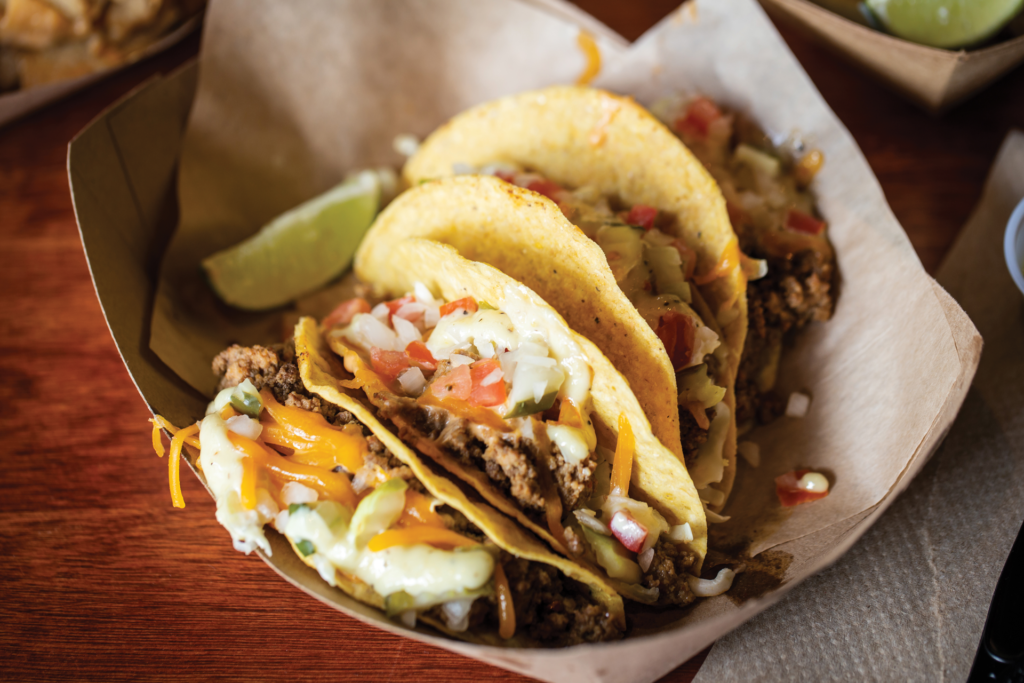 The “Cheeseburger Tacos” seemed safe: standard hardshells lined with ground beef, queso, and a few cold shreds of lettuce and cheddar cheese. They were. I have little to say about them except that you could create a more flavorful version at home with a $3 Old El Paso kit. (To be fair, the menu promised both pickles and “Donkey Sauce” — both of which might have made a difference, but neither of which made an appearance on the tacos I was actually served).

I tried dressing up those tacos with the three house salsas, available at the bar in large plastic squeeze bottles that did not squeeze. The avocado-tomatillo version was smooth with a decent acidic bite. The nozzle of the molcajete salsa bottle was completely clogged (this was true on two other visits). “Just unscrew the cap and pour it,” said a bartender who saw me struggling. “That’s what I always do.”

The condiment setup does not inspire confidence. Next to the salsas sits a communal plague jar of vegetable escabeche with a heavy glass lid that has nowhere to go but face down on the salsa-slopped bar mat while you tong out chubby carrots (and it’s mostly carrots) into too-small plastic cups. Unless you have the steady hands of a surgeon-monk, I don’t see a way to serve yourself without sloshing vinegar and vegetable matter into the bar mat’s nubby crevices. 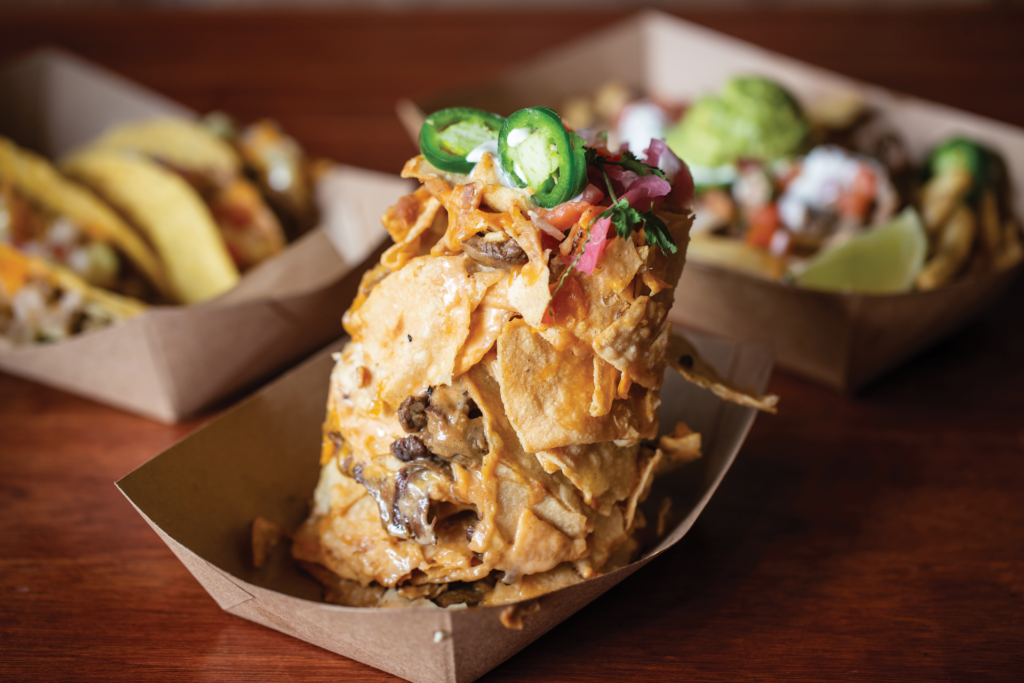 But Flavortown means never having to do the dishes. Everything here is served in paper, even the chicken tortilla soup. The famous “Trash Can Nachos” arrived not in a trash can but in an upside-down paper cup nestled in a recycled cardboard boat. On my first visit, the food runner removed the cup with a flourish to reveal a tower of chips sogged with gluey gas station queso and crema. Even “bad” nachos are usually palatable, but these had an overwhelming sweetness from the “bourbon brown sugar BBQ sauce” slathered onto the borracho beans like an aunt’s sloppy kiss.

The “Taquito Piquito Burrito” wasn’t supposed to have that barbecue sauce — just the beans. But it, too, was oddly sweet and unpleasantly mushy. To eat at Guy’s is to ride a carousel of vaguely unsettling textures. The pickled onions were spongy and dry (but how?), the “Al Pastor Tacos” were filled with soft, weepy pork, and the guacamole was stippled with chalky, foot-y cheese. The guacamole itself was cold and creamy, but I couldn’t taste the avocado for the lime juice (a symptom, perhaps, of needing to prevent large make-ahead portions from browning).

Diners are showing up anyway. Guy Fieri has a broad Everyman appeal that defies categorization, which may have something to do with a clientele that feels unusually diverse for Power & Light. On most of my visits, I observed a surprising mix of old and young, black and white, women and boys dressed like Bobby Hill. 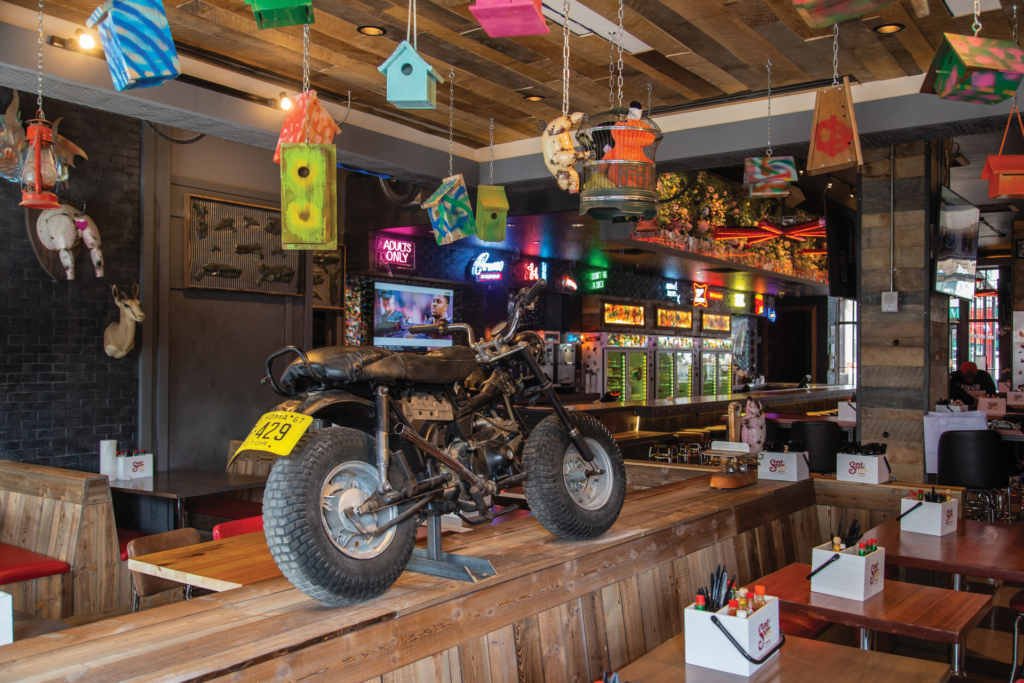 But who is this restaurant for? It’s surely not for the customers. I cannot think of a “joint” less geared toward the comfort of its patrons. There’s no table service here, but there are also no hostesses to tell you that. Your only clues on how (or where) to order are inkjet printer paper signs taped to the bar.

If you get lost, just look for the densest clump of crabby-looking customers. Everything — ordering food, picking it up, doling condiments into plastic cups from communal squeeze bottles — happens at the same narrow end of the restaurant’s central, rectangular bar. The food line coils all the way around that bar, squeezing seated patrons like a lethargic boa constrictor.

When it’s busy, it’s a catastrophic clusterfuck. The employees look frustrated. The customers look confused. I kept waiting for a man in a labcoat to emerge to tell me I was part of an environmental psych practicum, that the whole experience had been constructed.

Of course it has been constructed. Every offhand touch here is deliberate, every kitschy gesture a careful, corporate calculation. Trying to reverse-engineer a “dive” necessarily means posturing a kind of grit that would feel phony on any property with Cordish ties.

Nowhere is this more evident than in the miscellaneous stickers wallpapered above the bar, many of which feature advertisements for other corporations. A quick scan above my seat returned logos for Pizza Hut and Facebook as well as a jaundice-yellow Minion — the one from the memes.

If you don’t look too closely, it all seems fine. The problem with Guy’s Dive is that no one was meant to look closely. If you look closely, the vision collapses like a pile of trash can nachos whose cup was removed too soon.

Part of the problem may be that the guy — the Guy — seemed to have forgotten his latest “joint” exists. A full month after the opening, Fieri’s official website still had no reference to the Kansas City property. Nor had Fieri mentioned it on his promo-heavy Twitter page, not even on the day the restaurant opened (he did, however, find time to tweet a photo of someone’s bare feet with “F L A V O R T O W N” tattooed on the toe knucks).

I began to wonder: was I being duped? Now that I was thinking about it, did the signs say “Guy Fieri” or “Goy Fiero?”

But no. Guy at last made time for his Dive in early April, while in town shooting an episode of #DDD. If you’re hoping to watch the show at the restaurant, you might be disappointed. When the restaurant’s flatscreens aren’t tuned to sports, they’re playing Guy TV: a bizarre mashup of late-2000s YouTube clips, soundless Brett Michaels music videos, and instructions for drinking games like Dizzy Bat. At one point, I looked up from my taco and saw a clip of a race car crashing and catching fire.

“Should I put that in the review?” I asked my friend. “It feels a little on-the-nose.”

At times, there are glimmers — mirages — of what the restaurant could be. The beer list is solid for P&L, and the margaritas are serviceable. Ignore the $12 specialty margs, which taste like colors and run the gamut from sweet to sweet. Order the house margarita ($5 at happy hour) instead, which is pleasantly tart. 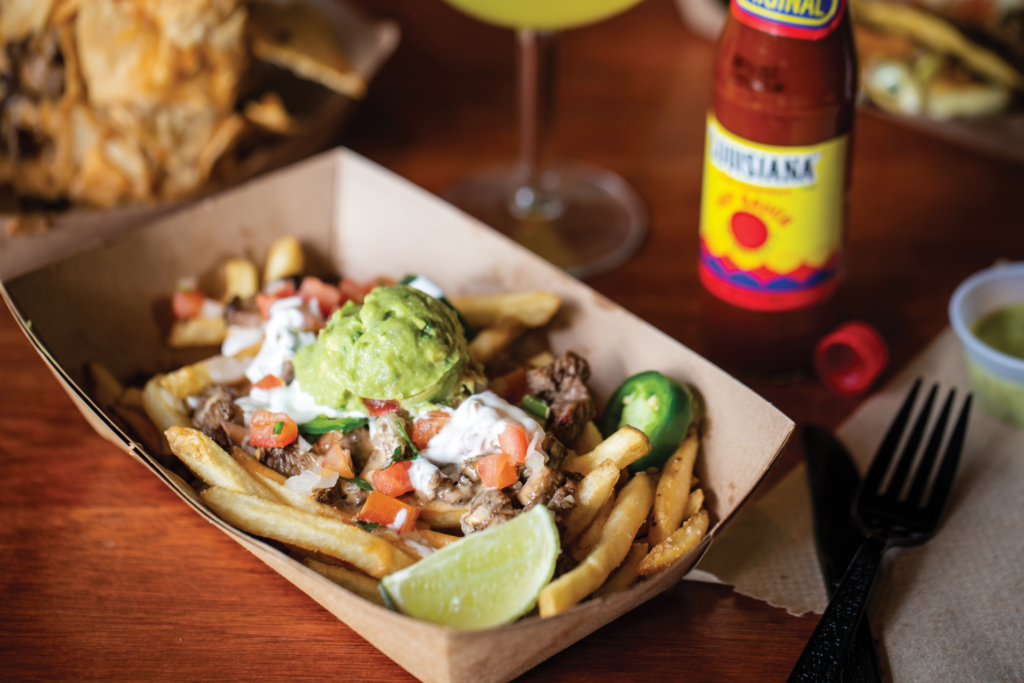 The Carne Asada fries were everything I wanted the nachos to be: crisp, gooey, and evenly smothered in cheese, guacamole, chewy steak, and thin-sliced jalapenos. The empanadas, too, gestured toward a Fieri sensibility: the pastry was fried to the color of a spray tan and well-stuffed with molten cheese and soft bites of poblano pepper.

My favorite entrée on the menu was the “Nacho-Crusted Chicken Torta Sliders.” For the price and the size, I wanted three, not two. But the nacho-chip crust was sharp and crunchy, the chicken was competently fried, and the twin acid-spice punch of the salsa molcajete and “Donkey sauce” was the closest I came on any of my visits to an address in Flavortown.

Management has made a few positive changes recently. After complaints from diners, the tacos per order were upped from three to four (though you still can’t mix and match). On my last visit, the bartender who took my order even pointed out where I could find napkins.

Of course, the fundamental flaws and the layout haven’t changed. Guy’s desperately needs a designated pick-up window and a condiment station located anywhere but the bar. The most frustrating aspect of Guy Fieri’s Dive & Taco Joint is that most of its major problems could be fixed with $1,000 and an afternoon. The question isn’t whether the City Council of Flavortown can fix it. The question is whether they have the wit or the will.

In the entryway to Guy’s Dive hangs an enormous pockmarked STOP sign, into which some presumably hip décor firm has key-etched “NO MAS.”

I should have listened. I kept going back, desperate to find a trace of its namesake. I visited the restaurant five times, waiting for something to move me, not caring much whether it excited or repelled. 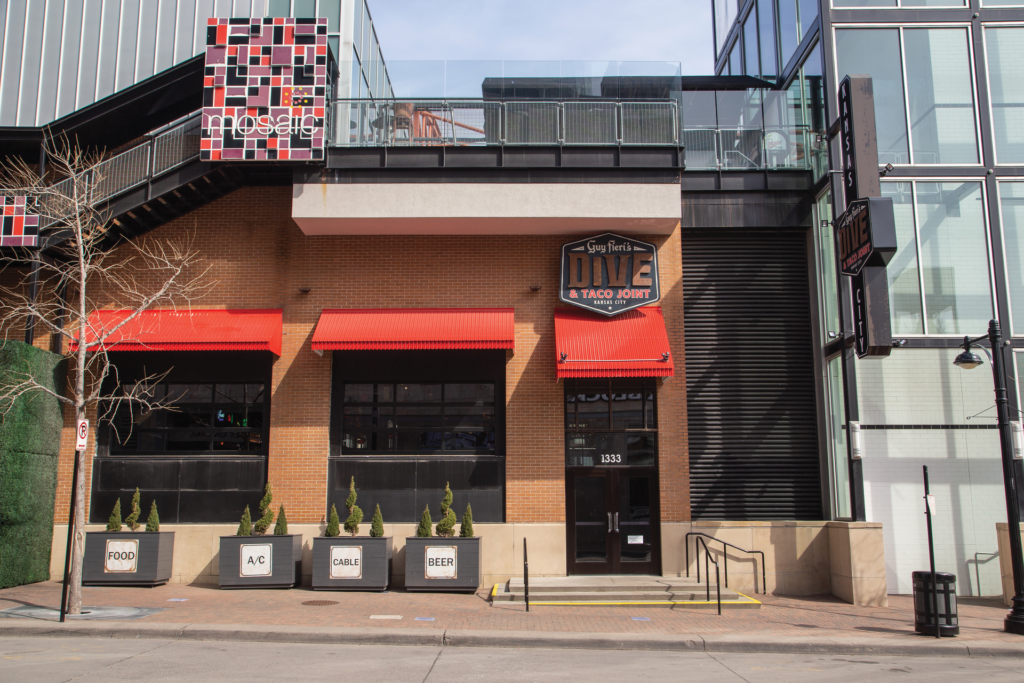