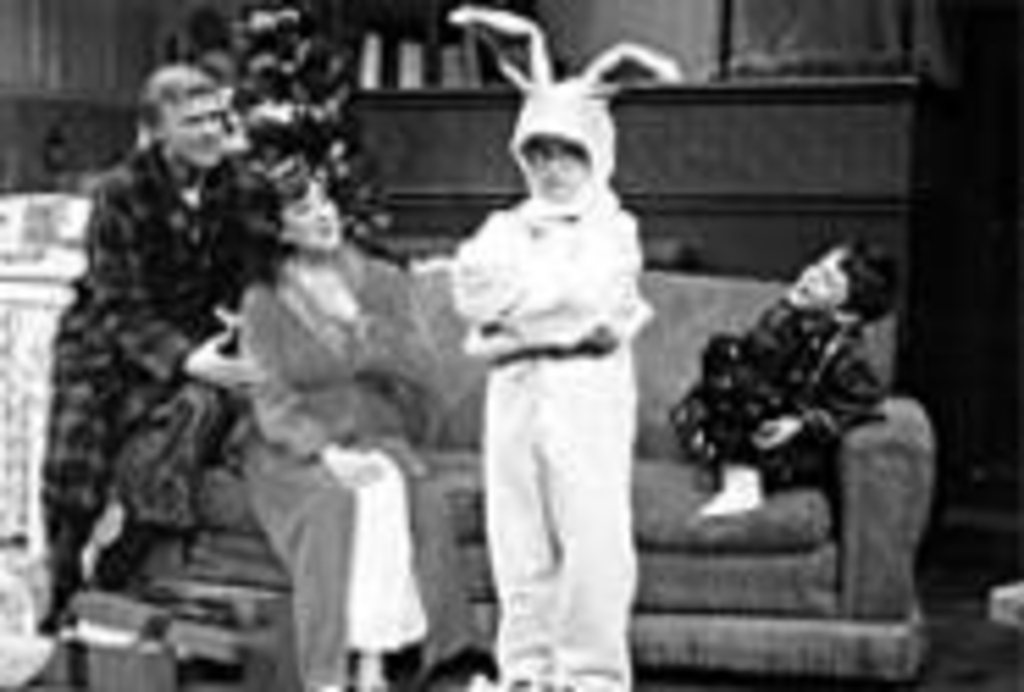 Rapidly gaining, I’m told, on It’s a Wonderful Life‘s long-held lead as the most repeated and remembered holiday movie is a relative latecomer, 1983’s A Christmas Story.

But even though I can imbibe Christmas tales as heartily as anyone (especially Christmas in Connecticut, with its sharp edges and holiday-averse heroine, played by Barbara Stanwyck), I’ve never seen A Christmas Story. I decided to hold off until I’d seen American Heartland Theatre’s stage adaptation of it, and now I’m thinking I’ll have to break down and rent the Peter Billinsgley-Darren McGavin film after taking in this effortlessly charming stage version.

Writer Jean Shepherd struck gold with this autobiographical punch bowl of creamy nostalgia. Though he was in his twenties in the 1940s, the show is a memory piece timed to the radio serials and BB guns of that decade’s boys. Ralph (Jack Hochman) is about ten years old and so enmeshed in the adventure comics stashed in his room that he often stages life events as if they’re inked in color and sequenced in boxes. At least he’s an avid reader.

Philip Grecian’s adaptation for the stage is marshaled by the adult Ralph, well played by Craig Benton. He weaves in and out of little Ralph’s house, school and playground like a harmless ghost, relishing the good times and cringing with embarrassment (often in perfect synch with Hochman) at the childhood follies that feel, at the time, like torture. The crux of this leading-up-to-Christmas tale is his frantic plotting to obtain the Red Ryder BB gun his comics seductively lay out like dope.

At every turn, he’s shot down by the overdramatic response “You’ll shoot your eye out!” Collectively quelling his dreams of a pellet-spitting militia are his mother (warmly and wittily played by Melinda McCrary), his teacher (a delightful Sarah Crawford) and even Santa Claus. Ralph’s schemes take drastic measures — like a failing real estate agent, he stuffs his parents’ mailbox with flier after flier, touting his intended’s assets.

In the weeks prior to Christmas, Ralph and his family (completed by Martin English as “The Old Man” and pint-sized Jackson Carter as his quirky little brother, Randy) experience a series of incidents that, in less able hands, would play like laugh-track-ready sitcom goofs. His dad, for example, is always rabidly entering contests, and, when he wins a lamp outfitted like the disembodied leg of a French whore, the result could have come off as a simple and lurid device. Instead, it stands as a peek inside the pockets of the man’s modest pride and is central to a devilish double take by McCrary as she and her hubby dim the light for romance.

Dad’s use of silly puns for cusswords also gets a resounding payoff. Though Ralph has grown up hearing euphemisms such as “mother creepers” and “stone-sucking bandits,” the roof comes down when he inadvertently utters the f-word. Mom lets out a shriek that would do the Bride of Frankenstein proud and eventually sticks a bar of soap in her son’s mouth. It’s gratifying that, though the f-word is never heard, the shame and the consequences are vividly present. Absent is anything cloying or cutesy.

This is evidence of thoughtful writing and a good director — in this case, Donna Thomason, whose winning work with the American Heartland’s The Dinner Party last season transformed a tricky script into something subversive and fraught with emotional nuance. Here, she delicately yet assertively traverses a show that could potentially rot your teeth like ribbon candy.

Thomason’s task wasn’t easy, either. With almost a dozen child actors under her wing, she keeps the show’s truth in check; she doesn’t condescend to her young thespians or the audience. And her sense of how family dynamics shade a room gives Ralph and his immediates, well, immediacy. You never disbelieve that the oatmeal’s on the stove — or on Randy’s face. From a show where some might expect gloppy sweetness, you instead get dessert that’s meticulously crafted — a $50 doughnut.