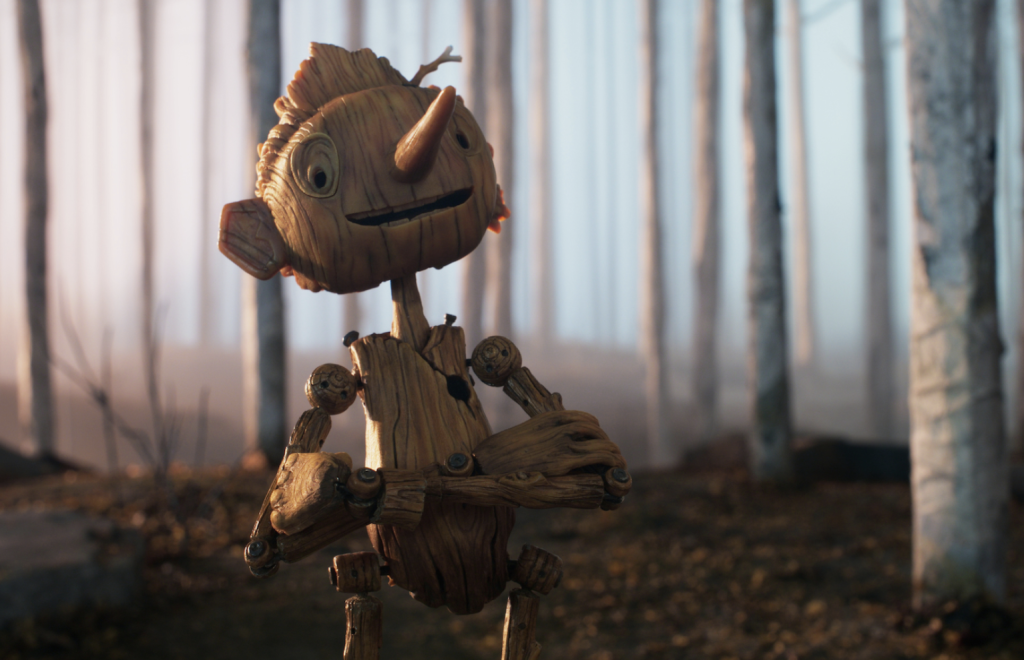 Stop-motion animation has always lived in a fascinating uncanny valley between child-friendly art form and child-unfriendly creepy remove. There’s beauty to it, but also a strange dissonance between registering what you’re seeing as animation (not real) and knowing at the same time that everything is actually hand-made and manipulated (real). It takes very little to switch the mood from playful to unsettling. That chasm is what makes stop-motion such an effective medium for filmmakers like The Brothers Quay, Wes Anderson, Henry Selick and Tim Burton — people with a childlike sense of wonder and love of whimsical detail, but a more adult storytelling sensibility.

Considering Guillermo del Toro’s ability to balance the beautiful and grotesque, not to mention his demonstrated love of scale models and detail-heavy filmmaking, it’s surprising that he hasn’t made a stop-motion movie before now. His much-anticipated Pinocchio is as lovely and bittersweet as you might hope, expressing love for the medium, a delightfully dark sense of fabulism and gently moving messages about love, loss and the grieving process. If your preferred flavor of del Toro leans more toward The Devil’s Backbone than Pacific Rim, this is your movie.

Working with co-writers Matthew Robbins and Over the Garden Wall creator Patrick McHale, del Toro’s Pinocchio, co-directed with animator Mark Gustafson, updates its central fairytale slightly to a WWII Italy setting. Woodworker Geppetto (voiced by David Bradley) lives a peaceful life in a village with his young son Carlo, but falls into a deep depression after the boy is killed in a bombing. He carves a wooden puppet boy, Pinocchio (Gregory Mann) from the pine tree next to Carlo’s grave, and a kindly wood sprite (Tilda Swinton, this movie’s version of the Blue Fairy) gives the puppet life, charging insect raconteur Sebastian J. Cricket (Ewan McGregor) with being the boy’s moral guide.

Geppetto is initially frightened, then resentful of his wooden son, but eventually grows to care for the boy. Their life together is disrupted when the neighborhood fascist commander Podesta (Ron Perlman) insists the living puppet—who can’t die—be enlisted in the army. Rather than obey the rules, Pinocchio instead runs off to join a carnival run by the predatory Count Volpe (Christoph Waltz) and his malevolent monkey sidekick Spazzatura (Cate Blanchett, in a performance consisting only of monkey sounds. I’m not joking). Geppetto and Sebastian follow after, in a desperate plea to get the little puppet boy to come home.

As with his best work, del Toro does an excellent job combining emotional vulnerability with a love of the freaky and uncanny, a balancing act that here gives the film a strikingly dark sense of humor. As a brand-new being with no understanding of how the world works and an inexhaustible lifespan, Pinocchio generates funny and frightening moments early on, as when he makes a mess of his father’s workshop, then promptly sets his feet on fire from sheer excitement. Geppetto’s grief over his human son’s loss is heartfelt and relatable; his initial horror at what that grief has wrought makes just as much sense.

Throughout Pinocchio’s journey, del Toro and his collaborators wind a number of themes. Those themes include the complex relationship between fathers and sons, a blistering message about the toll war takes on victims and survivors, and a staunchly anti-fascist take that feels impressively bold and timely (it shouldn’t, but this is the world we live in now). All of this is told through gorgeous visuals combining storybook whimsy with some very grown-up aesthetics. I, for one, never conceived of a version of the Blue Fairy that resembled the “Biblically Accurate Angel” meme, but somehow del Toro and his animators did, and it looks great.

Normal people might hesitate to call Pinocchio a “family” film, but it is — it’s the very special kind that exists less and less these days. It belongs to the odd 80s and 90s school of movies for kids that gave us Labyrinth, Time Bandits and The Nightmare Before Christmas, in other words, some of the weirdest and best of the genre. Pigeonholing aside, though, this is just excellent art, lovingly told, and exhibits impeccable craft from everyone involved. You’ll laugh, you’ll cry, you’ll cringe a little bit, and you’ll finish the film feeling all the better for it.