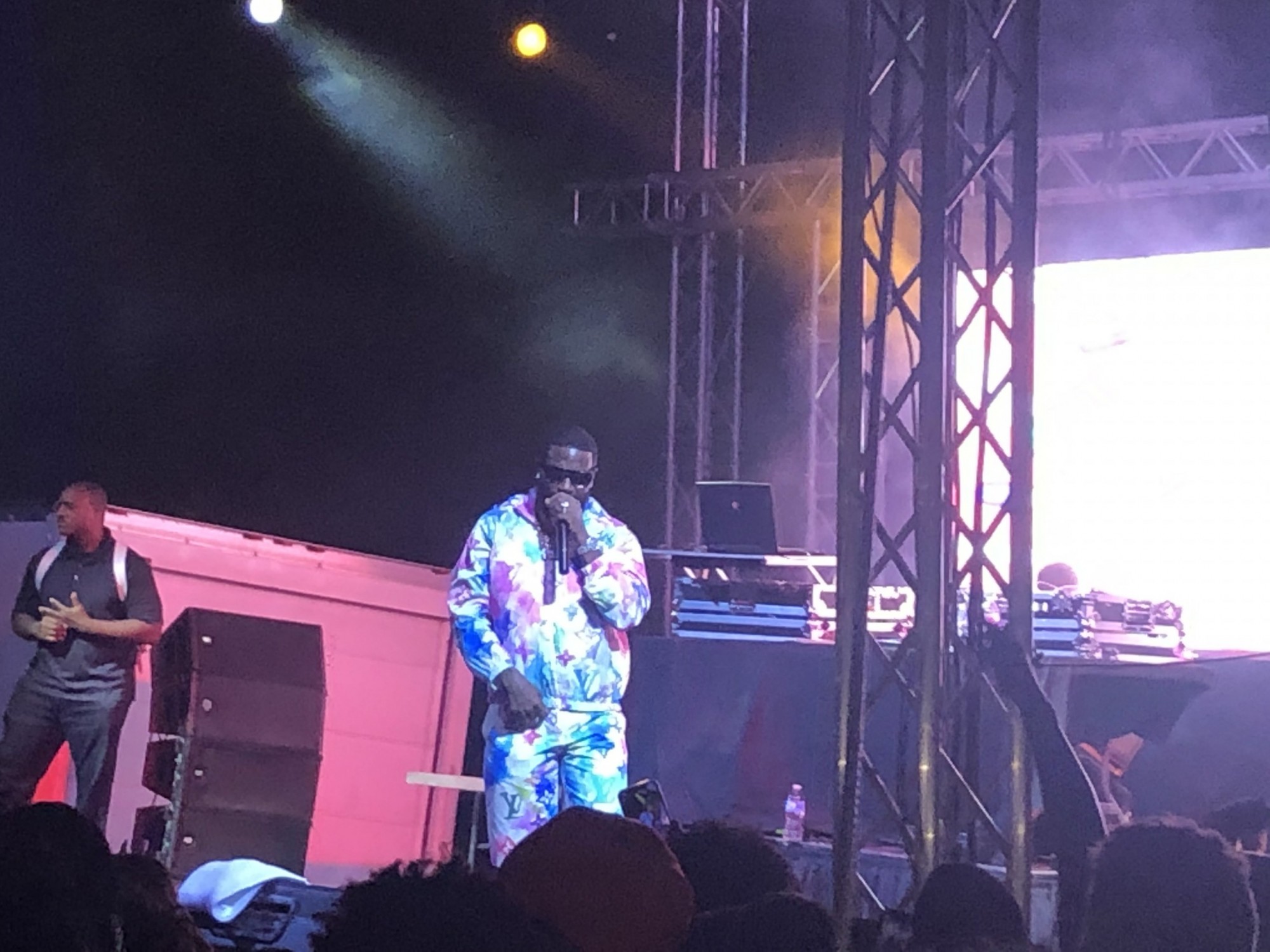 The inaugural Conclave Music Festival took over Liberty Memorial Park for a few short hours on the evening of August 1. While tame events such as the Missouri Wine & Jazz Festival and symphony performances have occurred on the grounds over the past few years, this may have been the most raucous gathering there since Rockfest 2016 (the final year before its move to the Kansas Speedway).

The festival also doubled as something of a Mask Day Eve party. With the city’s mask mandate set to restart August 2, the health department set up shop before the show, offering COVID vaccines in exchange for entries to a raffle for concert tickets and VIP passes. Before the first performers took the stage (and after a twerk contest hosted by Wild ‘N Out’s Justina Valentine), Mayor Lucas came out to show his support for the initiative, briefly urging concertgoers to get vaccinated so they can ditch their masks.

The night’s main draw was a headlining set from Atlanta trap icon Gucci Mane. Gucci—despite his monumental levels of influence in modern hip-hop—has not had the best luck in regards to Kansas City metro concerts in recent years. His headlining performance at the inaugural Flyover Festival in Bonner Springs back in 2017 was preceded by a thunderstorm that sent a majority of the crowd packing. Only a few hundred stuck around to watch him after the clouds parted. Later that year, his opening slot on a Sprint Center (now T-Mobile Center) show with The Weeknd was met with little excitement from the younger crowd there primarily for the Canadian R&B star. A 2019 concert he had set for Silverstein Eye Centers Arena (now Cable Dahmer Arena) was canceled entirely.

Since COVID wiped out large-scale concerts for 18 months, I figured a Gucci set on a warm summer evening at such a scenic location would be met with considerable enthusiasm, immediately topping these aforementioned appearances. I was correct in assuming this would be his best local performance of the last half-decade, but only marginally so.

Gucci played the hits and not much else. Staples of his live show—“My Kitchen,” “I Think I Love Her,” and “I Might Be”—were all included, but there were few surprises in his 30-minute set that he motored through, pausing for no longer than a minute or two total. I can’t tell you exactly what I would’ve asked of him in those pauses, but his sense of humor heard on his mixtape skits and schoolboy-like charm seen in home videos weren’t conveyed. Still, Gucci was all smiles, threw out some thank yous, and stopped once to ask for requests (before “Freaky Gurl,” which was almost certainly on the setlist already).

The crowd was more than happy to see Gucci; rapping along to favorites, swaying with drinks in hand, filming for Snapchat. The crowd seemed to number at least 1,000 attendees, but it was tough to make out. While Gucci has never been known for being a particularly engaging performer—his catalog of hits and impressive life story do much of the lifting—he put in at least as much effort as in my past experiences with him, rapping most of each track despite almost always having a recorded vocal track to fall back on.

Fans paid for a Gucci Mane set, and if they were a fan and had never witnessed a Gucci Mane set before, they likely walked away pleased. Those hoping for an early curfew were rewarded as patrons filed out of the festival grounds promptly at 10:30 p.m. 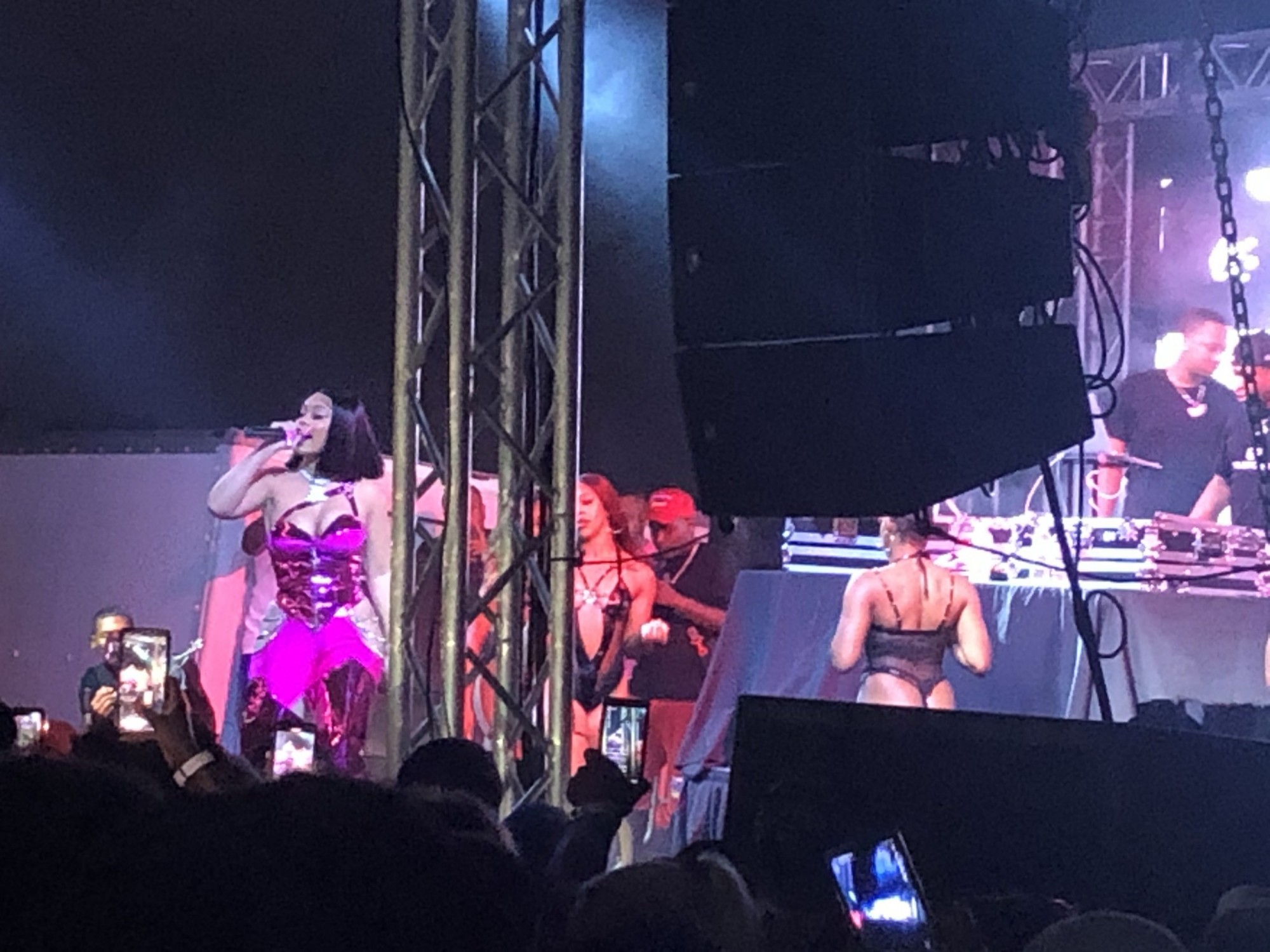 Fellow Atlanta rapper Latto (f.k.a. Mulatto) took the stage before Gucci Mane for a powerhouse support set. The self-proclaimed “Queen Of Da Souf” and occasional Gucci collaborator came with a team of four dancers in tow and wasted not one moment of her tight 15-minutes.

It was all kind of a perfect storm for Latto. The sun had just gone down, at least a hundred or so audience members had rushed the flimsy orange construction fencing that separated the GA lawn from the area in front of the stage, and (as far as I know) this was her first performance in Kansas City (she first charted in 2019 and released her RCA debut in 2020).

Many of the attendees took to standing on the folding chairs placed in front of the stage, intended for those paying higher ticket prices, and remained perched there throughout Latto and Gucci’s sets. Latto dominated the crowd’s attention in several ways: urgent bars, a Dirty South sound as classic as it is current, a natural stage presence, and a flashy pink bodysuit. Riotous performances of “Bitch From Da Souf” and her remix of Gucci’s “Freaky Gurl” incited violent twerking and screams from adoring fans. She just might have stolen the show. 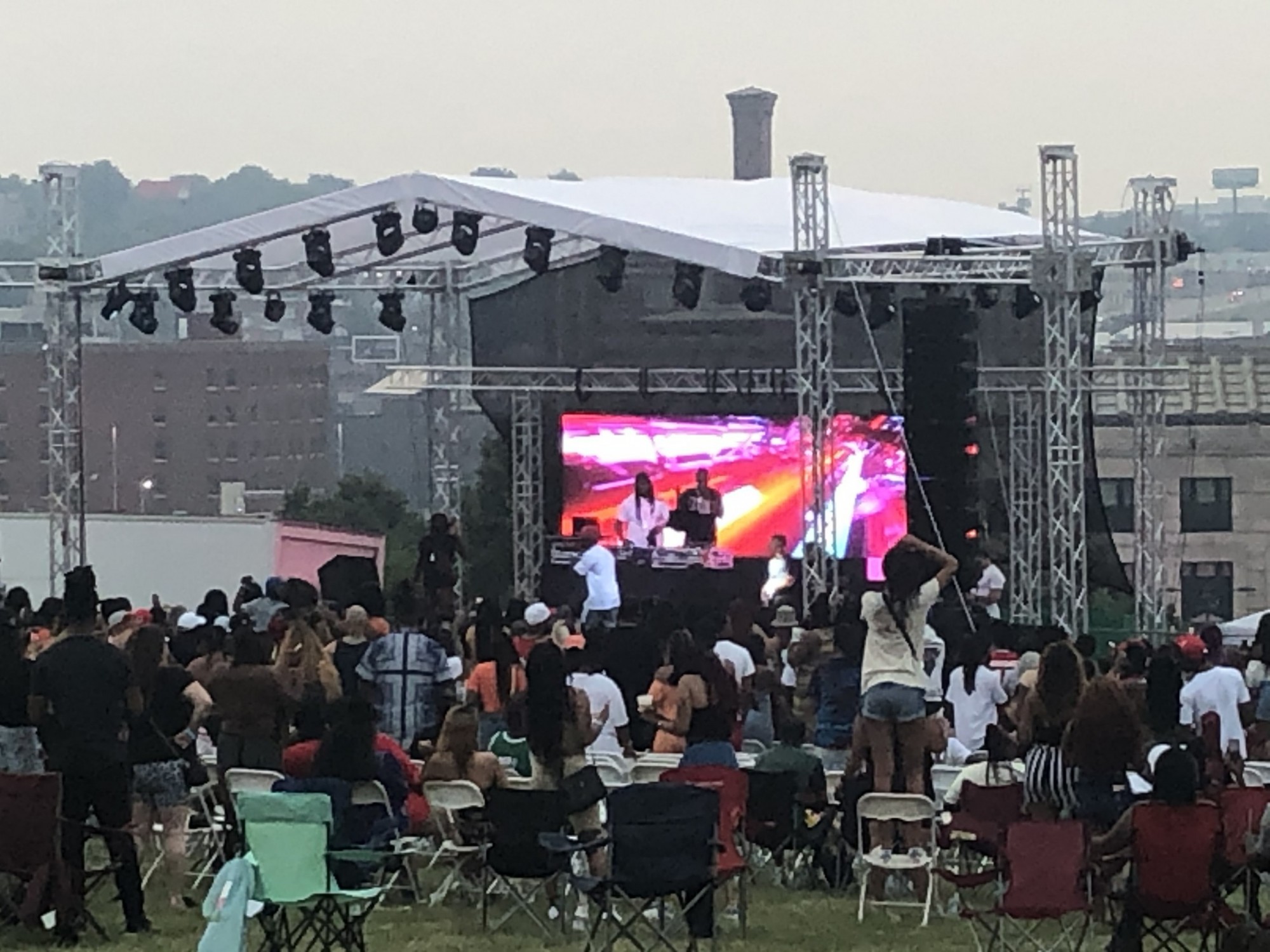 Mobile, Alabama rapper and singer Yung Bleu has been building his career slowly since originally signing to Boosie Badazz’ Bad Azz Music Syndicate back in 2013. Now distributing his music through his own Vandross Music Group (he likens himself to R&B legend Luther Vandross here and in mixtape titles) and Empire, Bleu recently scored his biggest hit yet with “You’re Mines Still,” which features a verse from Drake.

Fans cheered as the emotive R&B cut rang out, but Bleu seemed disinterested in showing off his pipes, opting to sing, for the most part, every other line of the song. Bleu showed more enthusiasm while spitting vulnerable raps on his Kodak Black collaboration, “Angels Don’t Cry,” but before any true momentum could be built, his 15-minute set came to an unceremonious end.

St. Louis rappers Ricky Wolfe and Y. Samuel kicked off the evening’s performances at around 7:40 p.m., offering melodic pop-rap love songs and unsubstantiated “bossing up” anthems to an uninterested crowd.

New York sing-rapper Lil Tjay, known best for his single “F.N” and Polo G collab “Pop Out,” was originally billed to perform before Latto but was dropped from the bill without notice from the promoter.