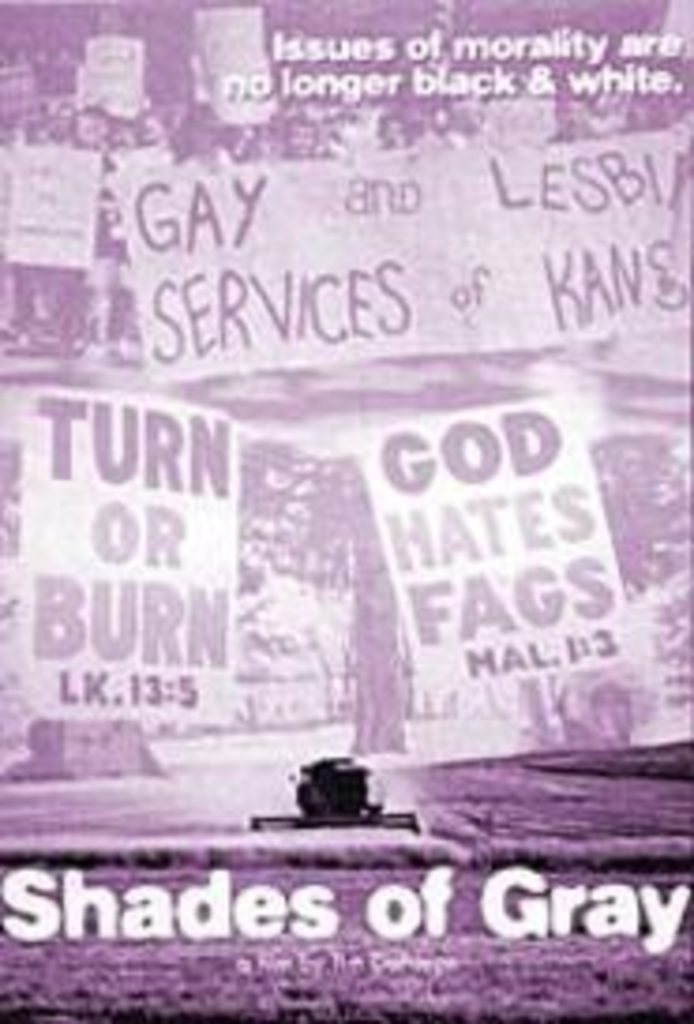 “There were always eyebrows that went up when they said, ‘What’s your film about?’ I’d say, ‘Gay life in Kansas,'” recalls Shades of Gray director Tim DePaepe during a recent interview in Lawrence, Kan. “Three years ago, when I was in South By Southwest (a film festival in Austin, Texas) pitching this thing, showing the demo around, I remember one response I got from somebody was, ‘How many gay people are there in Kansas? Three?’ I hope that by making this film … we would be showing the world that this is part of the Kansas landscape.”

Shades of Gray, which debuts at the Tivoli Manor Square Theatre at 7 p.m. on Saturday, April 1, with another showing at 11:30 the next morning, depicts the state as an eclectic place and includes a wide variety of narratives. There are intimate talking-head interviews with three gay men and two lesbians, re-enactments of their personal stories, news footage, and comments from the vehemently homophobic Topeka pastor Fred Phelps. It also looks at Kansas’ long history of civil rights struggles.

DePaepe explains, “We were a free state (during the Civil War), but at the same time we are the state that recently tried to repeal the teaching of evolution. Kansas is a dichotomy. It’s always been a conflicted state. Look at what Janet (one of the featured subjects) says in the movie. When people think about Kansas, they think about Bob Dole. They don’t think about gays, lesbians, or bisexuals. Anywhere but Kansas. That’s how a lot (of Kansas) gays and lesbians grew up. It’s a great conflict for this story.”

DePaepe frames the elements of the film around the successful 1994 proposal to add the words “sexual orientation” to Lawrence’s discrimination policies and the disputes it generated. “I just lucked out. It started around the time I started to make the film,” he says. “You can’t sit on the fence on this issue. There are no shades of gray in terms of tolerance or intolerance. The gray area is created by fear. I call the film Shades of Gray because you can see all the levels of this fear. You have Bob Moody (a Lawrence city council member) saying that you can’t legislate tolerance; you can only educate against intolerance, and he’s right. But yet at the same time, he’s voting in opposition. Figure that one out.”

Although Shades of Gray has yet to be shown to the general public, it has already attracted controversy. After receiving a thank-you letter and a tape of the film from DePaepe, Phelps sent a vitriolic fax threatening to picket the Tivoli screening. In the message the pastor calls DePaepe “a mendacious little pervert” and “a theologian come lately.” DePaepe takes out the message, points to a grotesque cartoon of a bandaged man with swollen eyelids, and says, “That’s (hate crime murder victim) Matthew Shepard. Honestly, I don’t care what Fred thinks. But it wasn’t until I got this (fax) in my hands that I said, ‘Oh, my God. He’s really going to be there.’ I honestly thought he was going to ignore me and that I was too small-time for him. His ego’s just tremendous. He’s been interviewed all over the world (by people like) Dan Rather and Hugh Downs on 20/20. He’s been featured in other national documentaries on hate groups. I think he is taking this personally.

“He’s extremely intelligent and very articulate, very much a Southern gentleman. My mother’s from the South, and I grew up a Southern Baptist too. It’s something he and I had in common. In all reality, I have more in common with Fred, as a white, heterosexual man in Kansas who grew up as a Southern Baptist, than I do with (the film’s gay subjects) Janet, Lea, Michael, Bill, or Ben. Ben’s Jewish, and Janet and Michael are Catholic. The difference between me and Fred is that I don’t hate people,” DePaepe says.

If DePaepe’s work has incurred Phelps’ wrath, it also has received some prominent support. Michael Moore, the director of Roger and Me and The Big One and the host of the television programs TV Nation and The Awful Truth, helped finance the film. DePaepe recalls, “He was in (Lawrence) giving a lecture. They had a receiving line, and I walked up and got him to sign a poster, and I just said, ‘Hi, my name’s Tim, and I’m an independent filmmaker.’ He said, ‘What are you doing?’ He had just talked about the banned segment of TV Nation on Fred Phelps. I said, ‘I’m doing this film about gay life in Kansas.’ His eyes kind of perked up, and he said, ‘Really?’ He stopped the line of people behind us. I gave him the quick one-minute pitch, and he said, ‘What do you need? What can I do to help?’ I said, ‘I need $75,000 to finish the movie.’ He said, ‘Do you really need $75,000?'”

After telling Moore about how much he had shot and the equipment he was using, DePaepe recalls, “(Moore) said, ‘Yeah, you’ll need $75,000. I’ll buy your next 20 rolls of film.’ He’s that cool. I’ve corresponded with him (but) I haven’t heard what he thinks of the film.”

DePaepe has devoted much of the past few years to Shades of Gray. He estimates that he shot approximately 52 hours of footage and can recite and imitate many of the comments from the film with eerie accuracy. “I can almost channel Ben,” he chuckles. Still, DePaepe credits his fellow Midwesterners (particularly the Independent Filmmakers Coalition of Kansas City) for inspiration and support.

“A film is never one person’s film, even though it says, ‘A film by Tim DePaepe.’ The only reason we do that is because one person has to sell the film.” In addition to his work on Shades of Gray, DePaepe, who graduated from KU’s Film Studies Program in 1990, has worked on projects as diverse as the movie Kansas and the television series Rescue 911. He also made the short documentary Quiet Passages and contributed an episode of the cable series Split Screen, which dealt with the banning of the movie The Tin Drum in Oklahoma. “It’s enough to make some people return my phone calls,” he says.