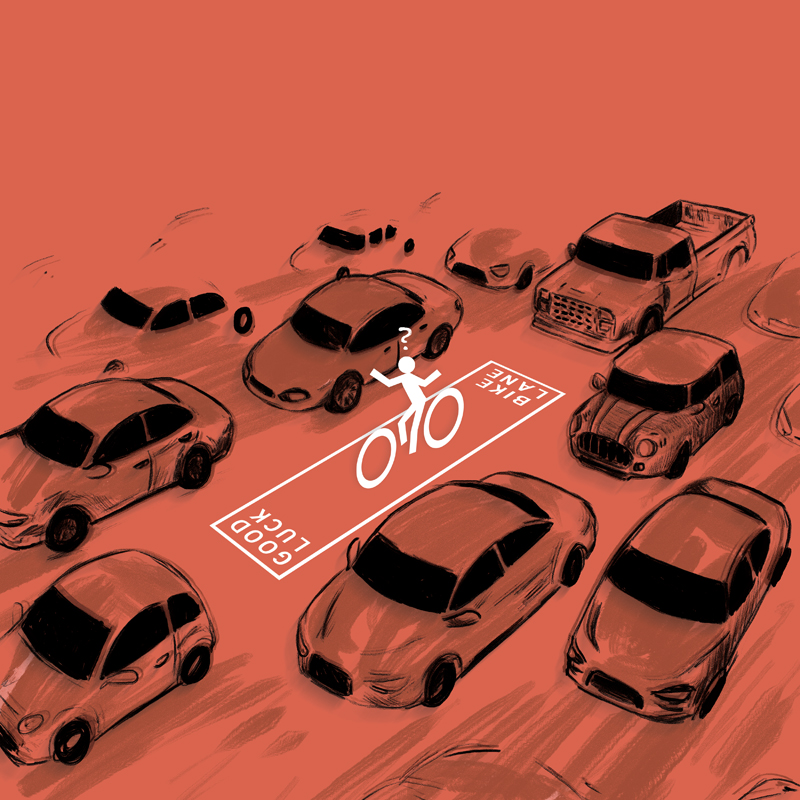 A Twitter account has been created on behalf of one of Kansas City’s most iconic streets. The account posts a one-word reply each day to the question “Bike Lanes on Grand?”

The answer is always “No.”

The account reflects the frustration of urbanites who think that Kansas City, Missouri, has been too slow to develop a bikeway system. They see Kansas City falling behind smaller cities, including Wichita and Cape Girardeau, in achieving bike-friendliness.

Grand Boulevard is a sore spot for cyclists because it was supposed to get bike lanes years ago. Seven lanes at its widest point, Grand has the capacity for experimentation. At one point, a two-way cycle path, a protected track that allows bicycles to move in both directions on one side of the road, was considered. But today, Grand lacks even conventional bike lanes.

City officials have come around to the idea that Kansas City’s bike efforts are failing. In December, the city auditor’s office released a performance audit that described the city’s on-street bike plan as “inadequate.” Agreeing with the findings, City Manager Troy Schulte asked for a new plan and identified a new staff member responsible for coordinating bicycle and pedestrian infrastructure.

Eric Bunch, co-founder of the advocacy group BikeWalkKC, went to City Hall on the day that city auditor Douglas Jones presented the findings to a City Council committee. Bunch felt vindicated by Jones’ 22-page report. “This says, ‘Oh, we’re not the crazy ones,’ ” he told me after the meeting adjourned.

Bureaucracy has been one obstacle to progress. Last year, the city solicited bids on a project to build a 4.5-mile downtown bikeway, with Grand serving as the primary north-south spine. A bid came in at $933,171, about twice what the city hoped to spend. The city repackaged the project but an insurmountable gap remained.

Bunch expressed his frustration with the process on Twitter. The day after a second round of bids was due, he posted a link to a story about the city of Calgary’s effort to roll out a downtown bike network using the “quick build” strategy. The idea behind that approach is to remake streets with simple and cheap tools, such as paint and plastic posts.

To Bunch and other bike advocates, the city’s Public Works department too often falls into “slow build” mode. Bunch questioned the time it took to put out bids. He wondered if some projects, such as putting streets on “road diets,” could be done by city workers or a contractor working on call.

Bunch also questioned the city’s impulse to seek federal funding for bike projects. The city is using money from a clean-air program administered by the Federal Highway Administration to help pay for various on-street bike facilities. Federal dollars come with rules that make building a bike lane more like building a bridge, subject to similar delays and increased costs.

“The reliance on federal dollars is inhibiting progress on bike facilities,” Bunch told me last fall, a point echoed in the recent audit.

When we spoke, the Grand Boulevard bridge over Interstate 670 was being rebuilt. Bunch was grateful that the new bridge had been designed with bicycles and pedestrians in mind. The bridge, which opened in December, includes bike lanes and 12-foot sidewalks.

But without similar infrastructure on either side of the bridge, the bike lanes are for the moment mostly symbolic. “I think it’s great that we have 150 feet of bike lane there,” Bunch said, keeping his enthusiasm in check.

Grand Boulevard has been loved nearly to death.

The late banker R. Crosby Kemper Jr., who led UMB Financial Corp. for 30 years, took a protective interest. In the late 1980s, Kemper squared off against the Hall family when the Crown Center Redevelopment Corp. sought to realign Grand to accommodate a new office building near 26th Street. “The Halls have tried to make Grand into a private street for years,” Kemper groused.

UMB’s identity was tied to the street. The family patriarch, William T. Kemper, had bought the controlling interest in a bank at 1728 Grand in 1918. Crosby Kemper Jr. led the company at the time UMB built its current headquarters, at 10th Street and Grand.

After the dustup with Crown Center, Kemper turned his attention to keeping light rail off Grand. In the 1990s, he opposed a Kansas City Area Transportation Authority plan to use Grand and Broadway for a rail line between the River Market and the Country Club Plaza. The plan fizzled.

Kemper once described Grand as “the grandest boulevard in Kansas City.” But mainly, he appreciated its automobile-moving capabilities, calling it “best street for traffic in Kansas City.”

Planners have come to reject the view that urban streets exist primarily to allow cars and trucks to move swiftly. Such a mindset fosters drab street life. Twenty years ago, The Kansas City Star called Grand a “dispiriting stretch” and “a chaos of boarded-up or bricked-up storefronts punctuated by parking lots, faded signs, crumbling brick and facades sealed off from the city.”

The Sprint Center and the Power & Light District have cured some of the blight. But the section between the downtown loop and Crown Center remains a dreary runway for commuters.

A younger generation of Kempers seems to recognize the mistakes of the past.

In 2011, Mariner Kemper, the current chairman of UMB, got behind an effort to remake Grand Boulevard into something more graceful and inviting.

“Make Grand Grand,” as the plan was known, utilized “complete street” principles, with an emphasis on walking, bicycling and public transportation over maximizing vehicle volume.

Bridging the Gap, the environmental advocacy group, recruited Kemper and Mark McHenry, the city’s parks and recreation director, to lead the Make Grand Grand effort. BNIM Architects prepared a design document with help from a transit planner in Portland, Oregon.

Before a First Friday event in 2012, college students and volunteers from the Downtown Neighborhood Association used burlap and potted plants to temporarily recapture some of the boulevard’s asphalt. The idea was to show what Grand might look like as a complete street.

Momentum for Make Grand Grand stalled, however, in part because of the cost. One estimate put the price at $30 million.

The will to make Grand grand was lacking.

In a statement, Kemper said he was no longer involved with the initiative.

Wes Minder, Kansas City’s new bicycle and pedestrian coordinator, rides a generic aluminum bike he bought at Wal-Mart. About once a month, he pedals downtown from his home near Lake Waukomis. During one perilous stretch of the journey, he’s forced to steer his bike onto the shoulder of Missouri Route 9. “Nobody really wants to be on the road once you get over 45 miles an hour,” he says.

Minder does not consider himself a fearless rider. He puts himself in a classification known in transportation research as “interested but concerned.” And he wants to build a bike network that appeals to people who likewise fit that category. “We need to get people who are not on bikes now, because they don’t feel safe,” he says. “We need to get them on bikes, going places.”

Schulte, the city manager, announced last month that Minder was taking over as the bicycle and pedestrian coordinator. Minder replaced Deb Ridgway, who had been in the role since 2007. Schulte also indicated that the city manager’s office, not Public Works, would provide staff support to the city’s Bicycle Pedestrian Pedestrian Advisory Committee. (Bunch is a member.)

Minder trained as an engineer and has worked for the city for 13 years. A “self-proclaimed farm kid from Illinois who wanted to build roads,” he worked in Public Works before moving to the city manager’s office to coordinate projects across departments.

Minder has worked on a number of trail projects. He calls the Line Creek Trail, a concrete path in Platte County, a “huge home run for the city.” He notes that Line Creek Trail users can reach Missouri Route 152 from Riverside and have to cross only one street.

“It may be a trail, but you can use it to get somewhere if you’re a bike commuter,” he says. “It’s a lot easier than using the roads.”

Minder takes a Ron Swanson–like approach to city government. He’s wary of what he calls the “fairies-and-unicorns ideal.” He likes projects that are quick, inexpensive and help people better their lives. On his Twitter account, he recently posted a picture of a bicycle chained to a tree outside a McDonald’s. “First step in upward mobility?” he wrote. “Bike infrastructure cheaper than govmt income programs.”

The notion that bike infrastructure should serve more than recreational riders emerged as a theme in the recent audit, which concluded that the existing routes “do not adequately connect people to destinations.”

The audit also noted that less than 10 percent of the on-street bike network provides a dedicated space for bicyclists. It’s a system, in other words, mainly for confident cyclists accustomed to riding in traffic.

“Cycling should not be a hobby,” Minder says.

Minder and the city’s bike and pedestrian advocates share this view. They’re focused on the practical and use social media to vent and share ideas. On a recent Saturday, Minder tweeted out a bike lane design used in Massachusetts and asked his followers for feedback. (The father of six boys, ages 13 to 2, Minder says he sometimes searches for this kind of material while watching cartoons with his youngest.)

“Wes Minder has long been a champion of complete streets, and we are excited to immediately get to work with him to building a safer, more equitable transportation system,” Bunch told me in an email. “He has the right mix of pragmatism, vision and technical expertise to make KC a great place for biking and walking.”

Minder says the new bike plan won’t be cooked up in a back room. He appreciates the effort that bike advocates made to include the neighborhood in the planning of new bike lanes on Armour Boulevard.

Like Schulte, his boss, Minder looks at the audit as the way to hit the reset button the city’s bike planning. He acknowledges the Star described the report as “scathing.”

“People care,” he says. “It’s good. If nobody cared about it, then why waste our time?”

Getting bike lanes on Grand Boulevard and other streets on riders’ wish lists won’t be easy, Minder says. But he does not want the obstacles to be an excuse.

Minder worked closely with former Councilman Russ Johnson, a fellow Northlander who occasionally rode his bike to City Hall. He remembers attending a transportation meeting in which Johnson, sensing timidity, bluntly said that his kids were not getting any younger.

Minder said the comment stuck with him and resonates even more now that he’s in his 40s.

“All this stuff we’re working on, I’d like to maybe use someday,” he says. “You’re never guaranteed tomorrow.”