Gooey butter cake slips onto a couple of local menus 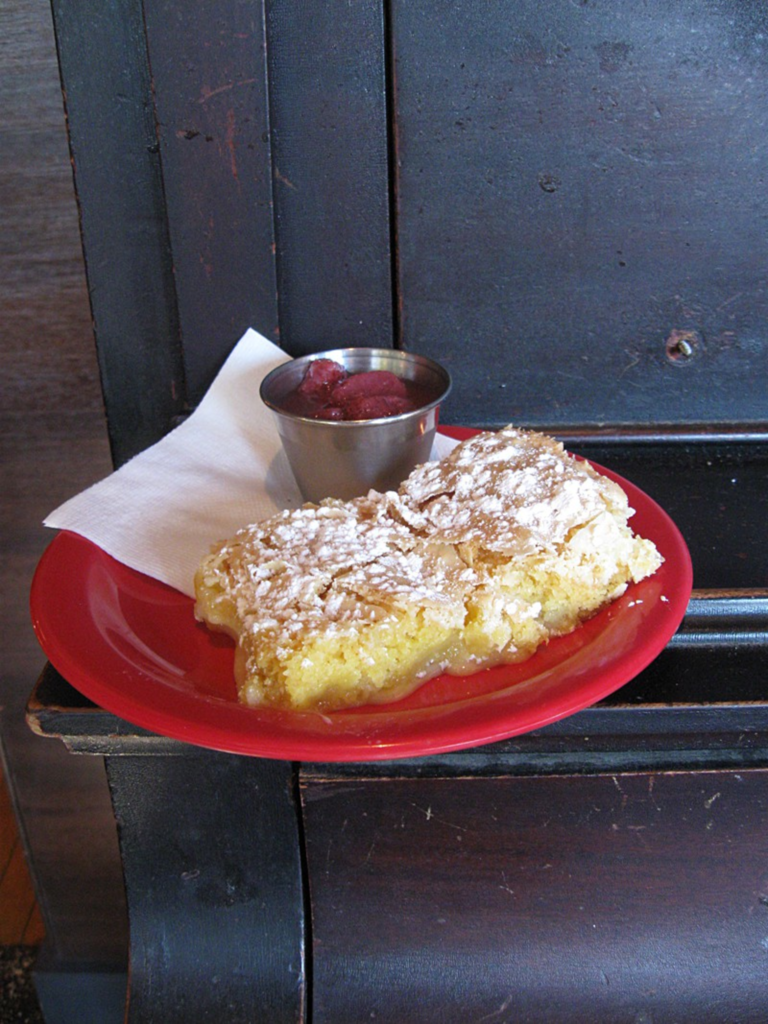 A dessert that’s synonymous with St. Louis has infiltrated our side of the state. Gooey butter cake, which tastes just like it sounds, is on the menu at Waldo Pizza and Lattéland.

Though many variations of the recipe exist, it’s generally composed of a yellow-cake base in a crackly crust, topped with a sticky and buttery layer and a dusting of powdered sugar. The result is a sugary-sweet concoction that’s similar to a lemon bar but with a soft, cheesecakelike consistency.

Waldo Pizza owner Phil Bourne was born and raised in St. Louis, and he wanted to serve some of the food that he grew up eating. The butter cake, he says, is a St. Louis – bakery tradition – legend has it that it was invented by the city’s German bakers in the 1930s. In his family, it was for a holiday or birthday. “You could buy it at the grocery store, but it would be homemade for special occasions,” he says.

Waldo Pizza’s cake ($4.50) was concocted by Melanie Anselmo, the restaurant’s prep cook and baker, who is also a St. Louis native. Based on a family recipe that she tweaked a bit, it starts off, yes, with yellow-cake mix. “It’s a great recipe,” Bourne says.

The goo layer (butter, cream cheese, sugar and eggs) contributes a pillowy softness that contrasts with the crunch of the top crust; the whole thing is enhanced by a side of strawberry sauce. Waldo offers a pumpkin-flavored version of the cake (available until around mid-December) and also fills orders for whole cakes.

Lattéland’s gooey butter cake ($2.59) comes via its merger with the St. Louis – based Kaldi’s Coffee Roasting Co. about a year and a half ago. According to Tom Norlin, Lattéland’s bakery manager, the two outfits have been sharing recipes, and the GBC has become a big seller here. From 30 to 40 pans a week are baked in the store at 79th Street and State Line and shipped to the other stores around town, Norlin says.

Lattéland’s version is dense and self­contained, with a caramelized, cookielike crust and a firmer goo coating. It’s capped with a chewy, crackly top. This gives it a certain advantage for commuters, according to Norlin: “It’s pretty travel-ready. It’s good on a plate, or if you grab a fork, tear open the pastry bag and have it at your desk at work.”

So if there were an I-70 Series of desserts, what would KC put up against gooey butter cake? Both Bourne and Norlin are a bit stumped.

“That’s a tough one,” Bourne says. “Back in the day, TJ Cinnamon’s – I’d definitely put that up. There’s no monster cinnamon roll in St. Louis that I’m aware of. Christopher Elbow chocolate would get close.”

Anselmo, the Waldo Pizza baker, points out, “German settlers in St. Louis opened a lot of bakeries. You don’t see that so much in Kansas City. There aren’t a lot of older bakeries. McLain’s might be older – I’m not sure – but it’s known for its shortbread cookies.”

Norlin says he believes in KC’s bakery scene. “There’s been a lot of expansion away from grocery-store bakeries in the past five to 10 years,” he says. “More people are finding a niche, like decorated cookies, cupcakes, special cakes. There’s been a big explosion in the Northeast of Hispanic bakeries. It’s really been encouraging to see.”

But what about a true KC dessert? “We need to find something,” Norlin says.