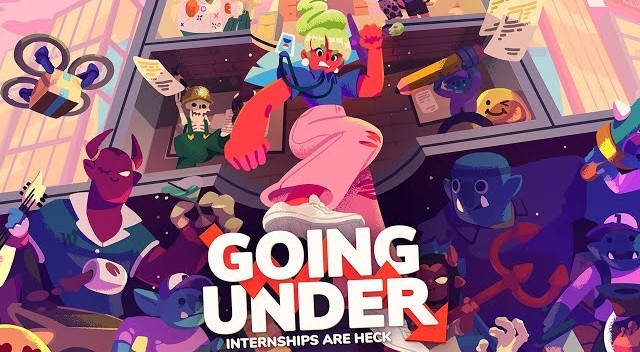 One of our favorite indie games of 2020 has been a bit of a surprise from left field. You know how internships are a thing that everything hates? Well, what if a video game gave your the escapism of reliving the unpaid labor period of your life, wherein everyone could treat you like shit? Sounds like a bad time. What if that internship was for an evil corporation that was perhaps part of an actual portal to Hell? Sounds like an even worse time.

Going Under is a satirical dungeon crawler about exploring the cursed ruins of failed tech startups. As an unpaid intern in the dystopian city of Neo-Cascadia, you’ll wield office junk as weaponry as you make your way through the offbeat procedural dungeons beneath your company campus.

So why is Going Under such a delight? Well, you can grab the game on PC or Playstation to find out. Or you can read this interview.

We sat down with Nick Kaman, Caelan Pollock, and Lulu Chiba to discuss the roguelike satire from Aggro Crab games, and what it’s like to make a highly stylized bad time.

The Pitch: Is it funny to take on an intern as protagonist because interns have no upward mobility under capitalism?

Aggro Crab Games:  We walked a fine line developing the humor of Going Under, because while we all agree that laughing at something is one of the most effective ways to shine a light on it, we never wanted to feel like we were punching down. There’s some dark stuff in the game! Jackie explicitly mentions being unable to afford health insurance, we briefly touch on sexual harassment in the workplace… and I didn’t want to feel like we were making light of people’s suffering. I wanted to laugh at the system that puts on such a cheery face while forcing people to go through this awful stuff. The tone, from the beginning, was “let’s laugh together at the horrible situation we’re in” because even if some of us have it worse than others, we’re all ultimately in this together.

Why make a satirical dungeon crawler? Is there anyone you were looking to as influence, or were you just making your own way?

We decided on making an action roguelike before we even settled on startups as a core theme. So once we started crafting the world and the narrative, we took a step back and said “What style of combat would really feel like an office brawl?” From there, we took a lot of cues from Breath of the Wild for designing combat that feels loose and chaotic, yet rewarding to improve at.

What’s the process of coming up with a good evil yet believable yet over-the-top nightmare company? Pop-culture has so few great examples, and I think Fizzle belongs among the top of that pantheon.

I think Fizzle might have been one of the first companies we concepted for the game, actually. We were in pre-production at the start of 2019, which was the height of the LaCroix craze. So we were kinda just like, “What’s the stupidest direction this trend could go in?” It could try to be a Soylent-esque meal replacement, it could try generating flavors with a neural network… and at the end of the day, almost all of our stupid ideas made it in.

Fizzle doesn’t work if you don’t see/present some angle of a company that you can believe/see the point of? What is the good in Fizzle?

I think all of the companies have some nugget of “Yeah, I can see how this idea could be good.” Just like startups in real life, it’s when you start to actually use your brain at all that the core premise starts to appear flawed. A delicious sparkling meal replacement drink seems genius if you don’t think about it too hard and don’t realize it doesn’t really make any sense.

Clearly, some of this is born of teeth-grinding frustration with the way the system works. Do you think there’s a message you hope players get? If a kid was playing this with no context, is there a goal you’d hope that your message would push? (Beyond, like, don’t do an unpaid internship?)

The game’s message was always more of a cry for help than a manifesto or a call to direct action. But if there’s one message it’s willing to die on a hill for, it’s one of workplace solidarity, and a larger class solidarity beyond that. All of Jackie’s co-workers start off extremely willing to put her beneath them in some way—even those who sympathize with her tough situation do so out of pity, not because they see her as their peer.

As the story progresses, we start to see that even those with a paid position at Fizzle are just as “stuck” as Jackie is. Regardless of whose material conditions happen to be better at the moment, they’re all being screwed over by the owners in similar ways, and they’ll ultimately need to work together to break free. If there’s one message I could give to a young person playing this, it’d be that ‘Union’ is not a dirty word, and don’t let anyone tell you that it is. 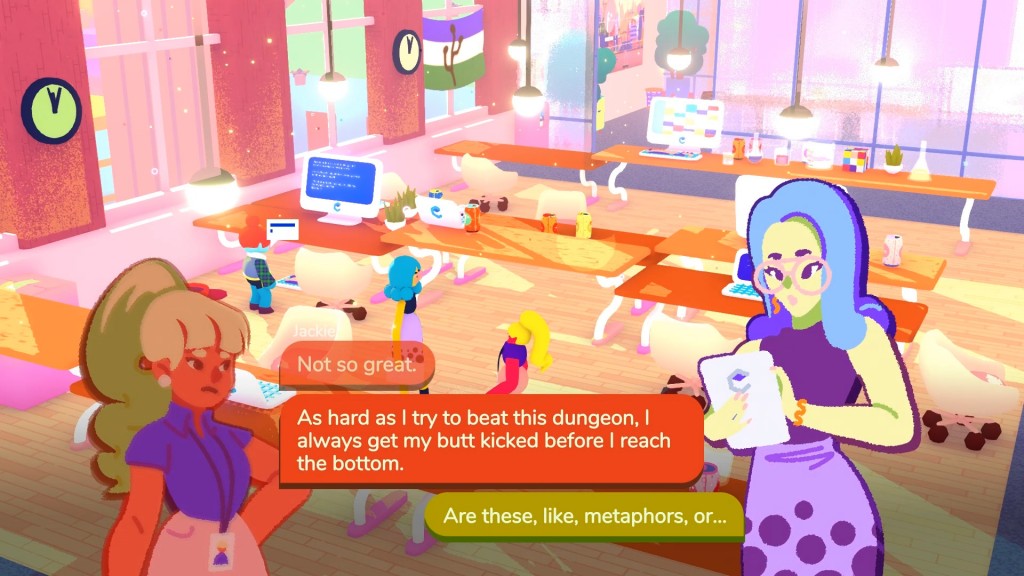 You aren’t just tackling internships so much as the Exploitative Extended Universe: dating apps, crypto, gig working, etc. Do you see a throughline that connects all that’s bad here? Do you have thoughts on how we beat this, or do you think this just represents the vein of how life exists now, and moving forward?

If I had real ideas, I’d be writing real political rhetoric instead of video games, haha. I mean, I feel like I’m being led on to say “capitalism” here, and while the game is undoubtedly critical of modern capitalism, I wanted to stay away from, like, direct political prescriptivism as much as possible. Part of that is because I’m a coward, but it’s also because I don’t think it’s right to tell people how they should be resisting. Like I said, we’re not interns. We own our own business. So while I’m super pro-union myself, I’m like, fundamentally against sending a message akin to “Just unionize, and then everything will be cool, LOL”. Workers themselves know better than anyone else what’s right for them and what needs to change about their conditions. More people just need to listen to them, to have some damn empathy for each other.

Character interaction is so important to this. What character mattered most to you?

Kara, the technology-hating lead programmer at Fizzle. She’s definitely the closest one to being a personal mouthpiece. I really don’t like gadgets very much, and most “smart” technology absolutely turns my stomach. But I’ve got myself into a career that’s totally inseparable from cutting-edge consumer technology. I think about that a lot. Kara’s undoubtedly the most “woke” of Jackie’s co-workers, as far as critiquing the system goes—she never stops railing against unethical uses of technology. But rather than being spurred to make a real change, her obsession with the world’s evils has made her jaded, grumpy, and inactive. I can think of quite a few people who think that bill, including myself on a bad day. 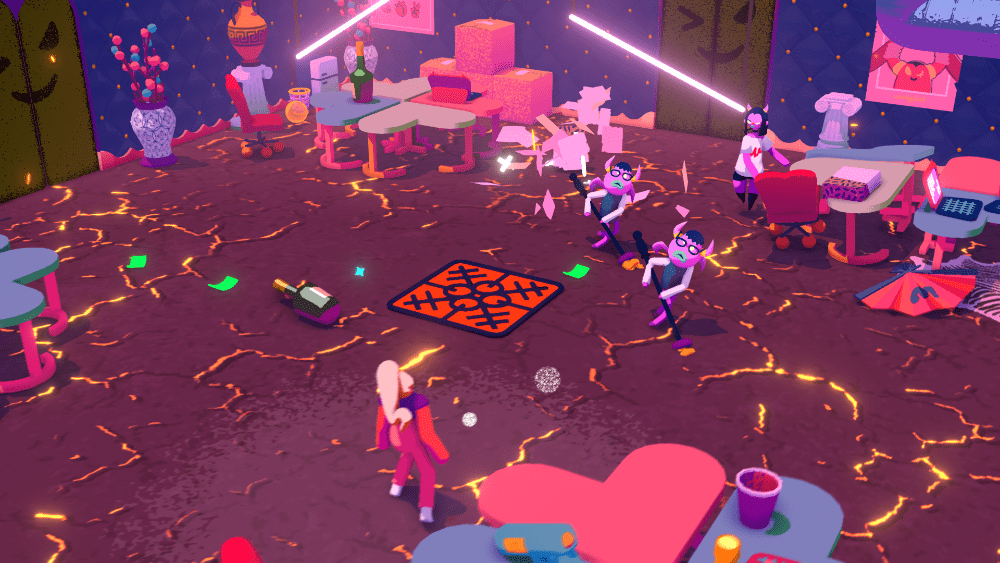 Who is Jackie based on?

Jackie actually started as “The Clerk”, one of several playable characters for a totally different game concept. She had a weaponized barcode scanner in one hand, and her other arm was a massive extendable power plug. Her name was Jackie because she could, like, jack into things with it, I guess? Going Under is a much better idea than that game, but I’m glad we saved Jackie. Besides that, she’s mostly meant to look like she idolizes Ariana Grande.

What is the plan for nurturing and developing a new IP like this? Where does the game go from here? How do you help grow the community?

Well, first things first, we’ve got an active Discord. People are constantly sharing their fan art and even their original startup dungeon ideas, which, if I’m being honest, has been the absolute coolest part of releasing the game for me. We’re working on free updates for Going Under at the moment, but we don’t intend on dragging out the game too long. The game’s done, the story is told, and I’m a firm believer that games should end at some point. Is a sequel on the table, though? Absolutely! We’ve got a ton of ideas for it. But Aggro Crab will probably have a non-Going Under project in the works before we start seriously considering Going Under 2.

What is the best compliment that you’ve heard about the game thus far?

Someone referred to the game’s writing as “Like a millennial Mike Judge” (Director of Office Space & Idiocracy, and co-creator of Silicon Valley). I lost my mind when I read that. Holy shit, I cannot think of a better compliment.