Go to Leawood’s JP Wine Bar to drink — just be sure to eat, too 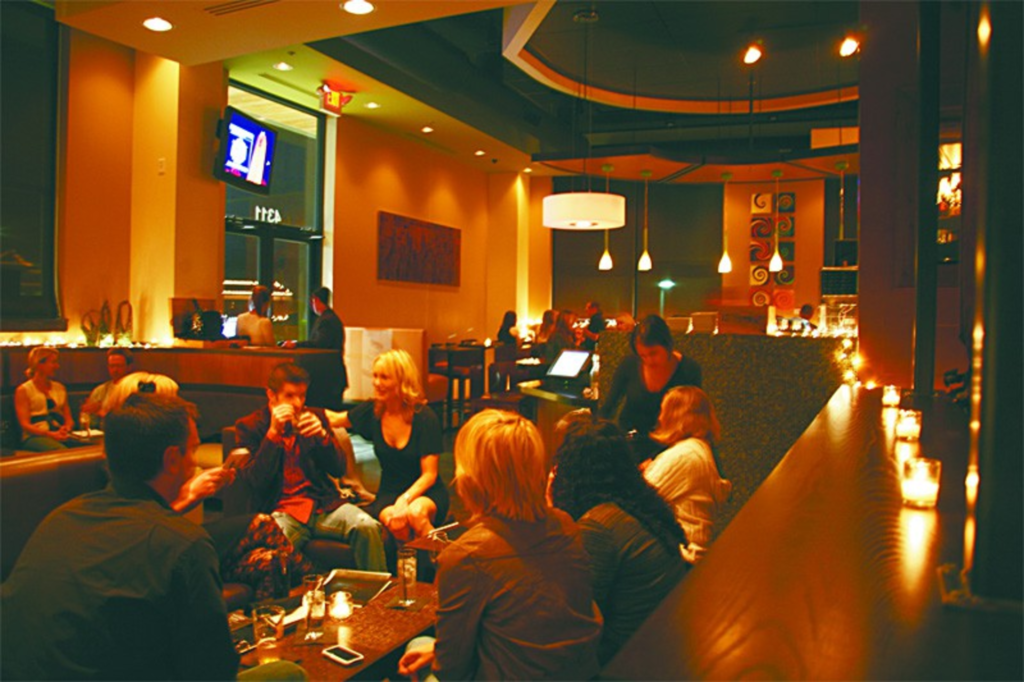 Signs that say “Store Closing” are posted in front of West Elm, the snazzy, upscale home-furnishings and home-décor shop at the One Nineteen strip center in Leawood. But a few feet away, at another upscale joint, the suburban branch of JP Wine Bar has a nice crowd for a frigid Monday night. If you can’t buy expensive home furnishings in this economy — even if they’re on sale — then, damn it, console yourself with an $8 glass of Château Desclau Bordeaux Superiore and a plate of pommes frites.

Leawood’s version of the JP Wine Bar is as attractive and sophisticated as the original location, which opened in the Crossroads three years ago as a combination coffeehouse and urban boîte. Though they share a name, the two JPs are separated by more than their distinctly different urban and suburban neighborhoods.

Owners Keith and Linda Gobel started JP Coffee, a Lee’s Summit coffeehouse named for their daughters, Jordyn and Paige. When they decided to start pouring wine in the evenings, they hired former Pierpont’s sommelier Ryan Maybee as a consultant; Maybee joined the Gobels in opening the first JP Wine Bar but is no longer part of either the Crossroads or Leawood operation. The downtown location has since dropped the early morning coffee and lunch business. Now it focuses on serving dinner — the menu, created by executive chef Brian Aaron, is slightly more elaborate than the one in Leawood — and on being a stylish place to hang out and have a drink after work.

The Leawood restaurant opened a year ago and added lunch service after six months. General manager Thomas Goerdel says business has been picking up.

I’ve had lunch there, but it’s the evening menu that I find intoxicating. Executive chef Patrick Curtis puts an impressive twist on the conventions of traditional bar food. Instead of that bar staple known as fried ” ‘shrooms” (I cringe at even writing the word), Curtis offers oyster mushrooms from the Beau Solais Farm in Hughesville, Missouri, dipped in light tempura batter and flash-fried to the consistency of crispy bubbles, then served with a chili-spiced mayonnaise and a ponzu dipping sauce. Talk about hallucinogenic.

We were all sort of frazzled on the night I dined with Stuart, Christopher and Martha in the L-shaped room. Christopher, as usual, had a hard time finding the place. (He believes that every restaurant, whether a diner or a four-star establishment, should call attention to itself with a giant illuminated sign, like Denny’s.) By the time we settled into a cozy booth, he was in a mood. “I need to see the wine list immediately,” he snapped.

Our server, Melissa, a lovely young woman who looked like a happier version of actress Katie Holmes (though, admittedly, I only see photos of Holmes scowling in the tabloids), could explain every dish on the menu articulately and intelligently. She also wasn’t shy about shifting our attention away from certain dishes. I had toyed, for example, with ordering the coffee-crusted beef-tenderloin salad as a main course.

“Well, we can’t have that,” Christopher said. “Nothing small for this table.”

And while the selection of starters wasn’t large, the portions definitely weren’t small, I’m happy to report. There were enough coriander-­crusted grilled shrimp that we each could have one; we smothered them in spoonfuls of sassy cardamom-spiced mango chutney. Martha wanted to try the apple salad: tart and sexy matchsticks of honeycrisp apple tossed together with slivers of manchego cheese in extra-virgin olive oil and chives.

Curtis also creates a visually sumptuous platter built around tissue-thin slices of La Quercia prosciutto — the American-made salt-cured ham that, according to the menu, is “made exclusively with humanely raised, antibiotic-free pork.” I’m all for happy, antibiotic-free pigs, but I think La Quercia’s prosciutto lacks the bravado and robust flavor of its Italian counterpart. Still, Curtis gives it the whole-hog treatment, serving it with crackers, caper berries, an assortment of oily imported olives, peppers and cornichons. “It’s a great autumn starter,” Christopher said as he folded a delicate slice of ham on a cracker with a sample from our Spanish cheese flight, a costly plate with a seriously modest array of cheeses (including a bit of wine-cured “drunken goat”) and lots of dried fruits, nuts, sliced fresh apples and toasted raisin bread.

Christopher was sipping from a Chardonnay — one of the three white-wine pours in his wine flight — and had relaxed by the time Melissa cleared away the starter dishes. We were almost too full to order dinner, but the atmosphere was so congenial and the conversation so lively that we all got a second wind. I’m so glad that we did because I can’t rave enough about Curtis’ succulent lamb chops, rubbed delicately with Indian spices and artistically arranged on a mound of orange basmati rice studded with saffron and lentils and a few luscious grilled leeks.

Martha had wanted the roasted Campo Lindo chicken breast from the moment she had read the menu description; the buttery breast was draped in a supple, herbed pan sauce and sided with roasted turnips. The very fit Christopher, who normally avoids carbs, ate every crumb of the grilled baguette slices tucked next to his bowl of cioppino, the brawny Italian seafood stew that Curtis loads with fat scallops, littleneck clams, mussels, shrimp, calamari, and hunks of heirloom tomato in a spicy tomato-based broth.

Stuart, Martha and Christopher pushed away their plates and shook their heads at the very idea of dessert, but I was game when Melissa rattled off that night’s dolce selections: “We have cinnamon-apple bread pudding, espresso crème brûlée and a banana cake with a side of chocolate mousse.”

“Since the banana cake is the weirdest sounding one,” Christopher said, “we should try that.”

We were disappointed. The rustic slab of too-crumbly cake was topped with beautifully caramelized banana slices; crushed candies or cookies were sprinkled atop the mousse, with something undefined mixed in with the fluffy chocolate below. Christopher described the texture as “chocolate-flavored egg-drop soup.” One of the servers went back to the kitchen to find out what gave the dessert such a peculiar texture but came back without an answer.

It was the one sour note in an otherwise perfect meal. “It was a divine dinner,” Martha said.

I agreed. But I wish I had ordered the bread pudding.