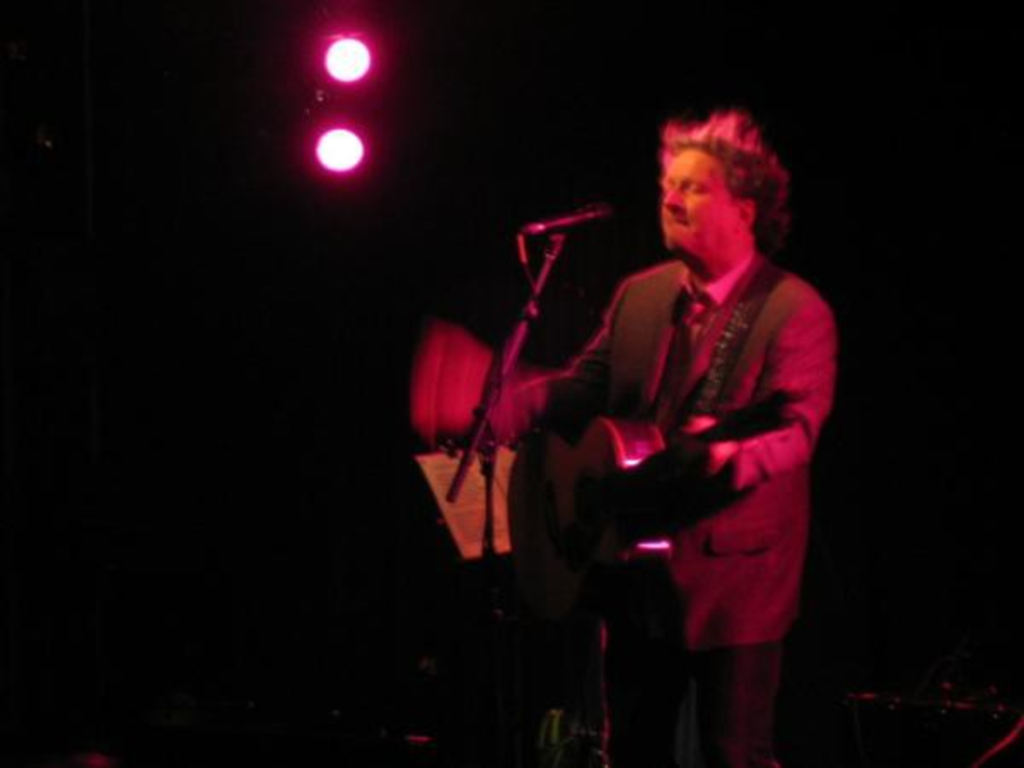 Solo acoustic shows can be quiet old things, but last night Glenn Tilbrook shattered that stereotype. From the moment he pounced onstage and invited the crowd to sing along with “Best of Times,” Tilbrook played like a full band – and much to the joy of fans, that band was Squeeze.

Tilbrook has a handful of articulate, warm, funny and sometimes heartbreaking albums in his post-Squeeze musical life, but realistically, fans come to shows aching for the songs he wrote decades ago with Chris Difford. Monday night, Tilbrook delivered more than a dozen Squeeze songs, from the expected to very deep cuts. Much to the surprise of the crowd, he even brought out a new Squeeze song, “From the Cradle to the Grave,” and the promise of a new Squeeze album early next year. For the hundred or so fans packed into the RecordBar last night, it was Christmas in October.

The first few songs, “Persephone,” from Tilbrook’s new solo record Happy Endings, and “Ter-Wit Ter-Woo,” from a collaborative called the Co-Operative with British band Nine Below Zero, were surprises. As he paused to tune up, Tilbrook explained that on this three-week tour, he’d been cast as “an exaggerated version of myself: scruffy, unkempt, a bit frayed.” In a sports jacket and gently used jeans, he looked mild-mannered enough. Tilbrook then broke out “Monkey,” a groove-based rocker he co-wrote long ago with Chris Difford – “When we were children, really” – for the 1970s rock band Dr. Feelgood. It was unfortunate that the dance floor was packed elbow to elbow with 60 seated fans.

Tilbrook is a sweater, he admitted to the crowd last night, apologetically explaining the simple floor fan trained on him throughout the show. “It’s not an affectation, I just get hot.” The honesty was charming: With his impressive, poodle-like gray bangs blowing back in the breeze and his affectionate tilt toward the crowd, Tilbrook looked like a professor from central casting perched on the prow of a yacht, clipping along spryly at about fifty knots. The man looked happy.

And once he launched into the Squeeze material, the crowd was even happier. It was easy to forget that the band broke up in 1982, and Tilbrook’s versions of “Annie Get Your Gun” and “Take Me I’m Yours” were raucous, even on acoustic guitar. When he moved to the thunder of a 12-string for “Is That Love” and “Up the Junction,” Tilbrook’s talents as a storyteller truly shone. 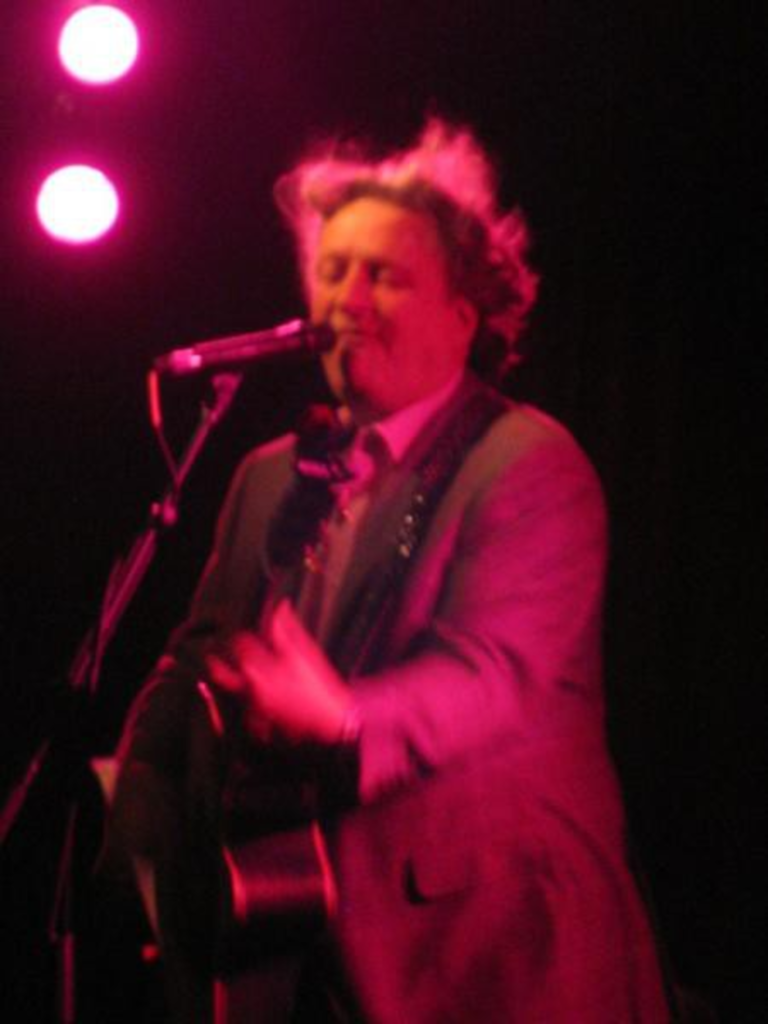 After a break and a costume change – new sport coat, green sparkly shoes – Tilbrook professed a “need for electric guitar,” and the show kicked up into a league the crowd hadn’t expected at all. In the prime years of Squeeze, bassist John Bentley was huge part of their sound, and Chris Difford’s buzzing voice – a deep counterpoint to Tilbrook’s soulful tenor – gave the band’s vocals their signature sound. Somehow, impossibly, Tilbrook found a way to evoke both with his guitar playing.

Tilbrook is known as a songwriter, but he deserves more credit for his guitar work and vocal power. His growls, though not quite in Otis Redding territory, would at least give Joe Cocker a run for his money. In the second half of his set, Tilbrook went way beyond simply recreating the Squeeze sound solo. “Tempted” was transformed into a Muscle Shoals workout, and “Hourglass,” with its rapid fire chorus of Take it to the bridge/Throw it overboard gave him (and the crowd) a chance to really shake out the pipes. The last part of the set was a cascade of the hits, from “Black Coffee in Bed” to “Another Nail in My Heart” to “Pulling Mussels from a Shell,” and they just kept getting better.

Tilbrook’s encore was, of course, “Goodbye Girl,” and he closed it with a few quick scat choruses and jazz guitar (and a quick “Thanks, loves” at the end). During the show, his hints at upcoming tours with Difford (and perhaps a version of Squeeze) made it clear that next time, the man will need a bigger room.

Leftovers: You have to love an acoustic set that features both cello and trombone. Local songwriter David George, playing with guitarist Ben Byrd and cellist Christine Gross (“two-fourths” of his band A Crooked Mile) opened with new songs “All in All” and “Damn the Love,” and his gently gravelly voice worked just right in this setting. Closing song “Lover in Me,” with guest trombone, primed the crowd perfectly for Tilbrook’s one-man magic show.

Setlist:
Best of Times
Persephone
Ter-Wit Ter- Woo
Monkey
Annie Get Your Gun
Black Sheep
Dennis
From the Cradle to the Grave
Take Me I’m Yours
Untouchable Chords
Elephant Ride
Is That Love
Up the Junction
Ice Cream
Oh Well (Fleetwood Mac cover)
Everybody Sometimes
Slap and Tickle
Vanity Fair
A Whisper to A Scream (Elvis Costello cover)
Still
If I Didn’t Love You
Everything in the World
Tempted
Hourglass
Black Coffee in Bed
Another Nail In My Heart
Pulling Mussels from a Shell
Goodbye Girl