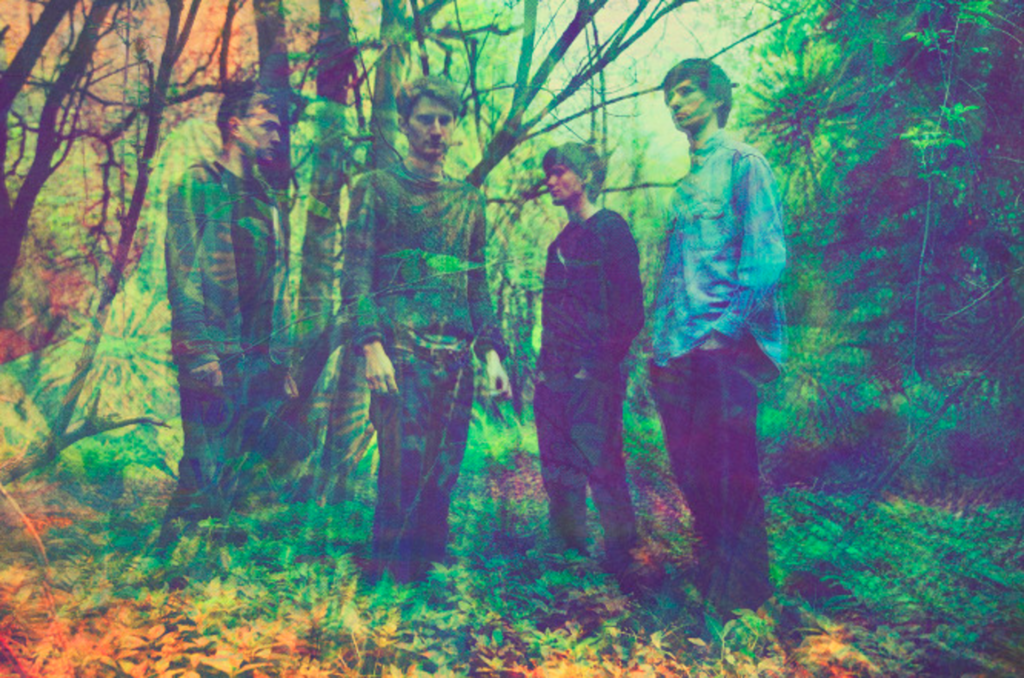 Glass Animals brought their sexy, sweaty tropical indie rock to KC twice this summer, selling out Czar Bar and the Riot Room in July and returning to open for the Head and the Heart at the Midland in September. The Oxford lads are back, this time playing the sold-out second night of the Night the Buzz Stole Xmas at the Midland.

We caught up with lead singer Dave Bayley from his hotel room in St. Louis to talk about the difficulty of finding palm trees in the Midwest, what would happen if the members of Glass Animals were university professors for a day, and what 2015 holds for the band.

The Pitch: What is Glass Animals looking forward to about being in KC again?

And you’re returning to the Midland?

Yes. It’s so beautiful, isn’t it? I was kind of blown away with how beautiful it was last time. The chandelier is so big I thought it was going to fall down.

Glass Animals follows Misterwives, Outsides, Banks and Bleachers Saturday night. Have you played with any of those artists before?

I’ve played with Banks before, only a few days ago actually, in Los Angeles. She’s really cool. I did a remix for her a couple of years back.


Approximately how many palm trees are you bringing to the Midland on Saturday?

I will admit that there’s a slight drought of palm trees in the Midwest. They just don’t grow out here. We considered doing Christmas trees but we did end up getting palm trees. We have a total of 12, I think.

2014 was nuts. It was incredible, but it was very much divided into halves. First half of the year we were making the album and then sitting around waiting for it to get released. And then it all kind of kicked off when the album got released and we’ve been busy touring. I imagine 2015 is going to be like the latter part of 2014 where it’s just busy touring and getting into the studio whenever we have the chance.

Do you see yourself recording the next album on the road?

I imagine we’ll start throwing ideas around at some point while we’re on the road, but I think we’ll have to record it in one sitting. I like doing that. Just sitting down, focusing for a couple of months and getting it all out of the way.

If you could peer into a crystal ball and see into Glass Animal’s future, what would you want to see?

I love hanging out with the rest of the band, they’re my best friends, so hopefully just sitting in a really nice café drinking some beer and chilling with my friends. I think that would be the dream. The important thing to us is having fun and making music we find interesting. If it leads to us meeting Beyonce, that’s cool.

If you could collaborate with anyone dead or alive, who would it be?

If you had to assign a Disney princess to each band member, who would be what?

Joe would be Jasmin from Aladdin. Ed might have to be Snow White because he’s really tall, and compared to him, everyone else is a dwarf. Drew is Belle from Beauty and the Beast because he’s a prettyboy. I want to be the girl from Frozen. She sings a great pop song. Yeah, she’s cool.

If you had to teach a course in university, what would it be called?

I think everyone would have to teach a different course. Joe would give one or two lectures a week on “The Urban Diva” and he’d teach people about street wear fashion trends. When Drew gets wasted he gives us lectures on different classical compositions of 18th century composers. So he’d do that. Ed is really into trains and bird watching. So his course would be “The Privatization of the English Rail System in the 17th Century as Seen Through the Eyes of the Red Kite.” I don’t know what I’d teach. I don’t know that I would teach. I would just go to all the lectures because they’d be really interesting.

Glass Animals headlines The Night the Buzz Stole Xmas Night 2 at the Arvest Bank Theatre at the Midland on Saturday, December 20. 5 p.m. doors. Tickets are sold out, but maybe you know a guy.