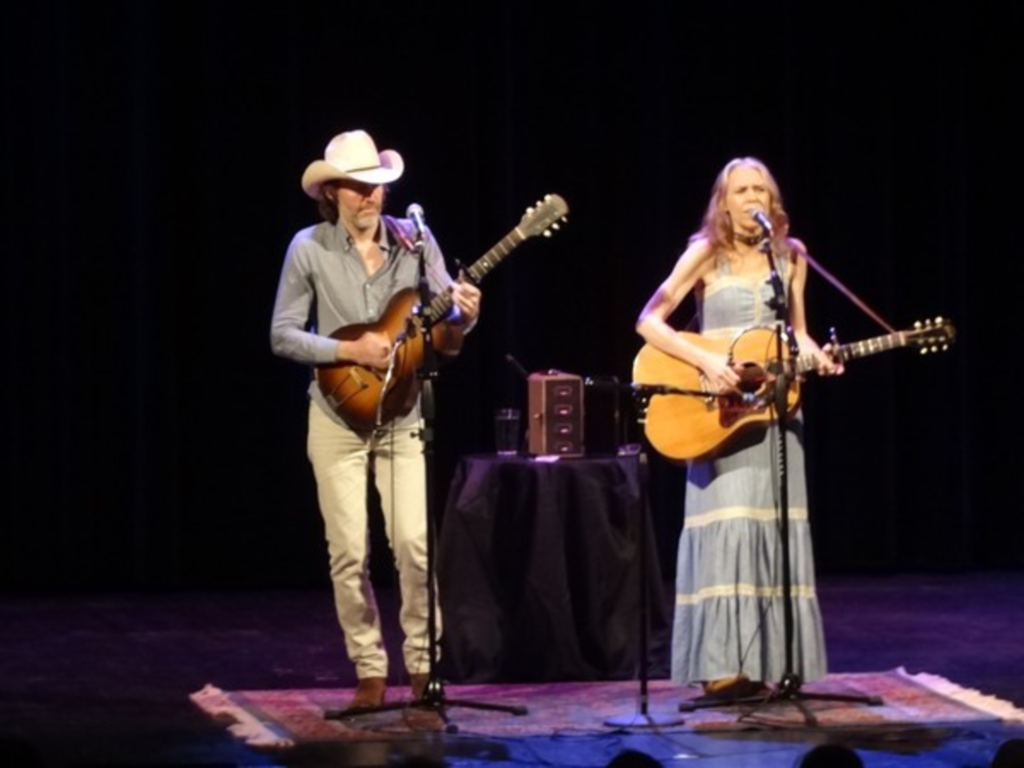 The stage set for Gillian Welch and Dave Rawlings at the Folly last night could not have been more simple: Two mics and a black-draped table with two pint glasses of water and a tiny file cabinet. No matter. The centerpieces of the night were, of course, Welch’s gorgeous, evocative voice and her partner Dave Rawlings’ amazing guitar work — and those songs. By the end of it all, every person inside the capacity-filled building was part of the show — a rare and beautiful simpatico relationship.

It started, really, when after the first haunting tune, “Wayside Back in Time,” Welch mentioned that she’d called her dad to find out if he’d ever performed at the Folly.

“He’s from Kansas City,” she explained. Way back when, he’d been part of R.K.O’s “Stars of Tomorrow,” a sort of vaudeville kiddie show where he played accordion and tap danced. “His mama made his little outfits,” Welch said, smiling.

From that one-generation-removed hometown connection (as if her fans needed anything else), the crowd leaned into every song.

“The next one’s kind of a downer, I guess,” Rawlings said with a laugh as he introduced “The Way It Will Be,” “but it’s not like we’ve taken you to the heights.”

As lush as their beautiful unison singing was, the crowd’s tapping feet gradually turned the Folly’s wooden floors into the world’s largest — if still subtle and respectful — stomp box. As the show continued, the effect kept building. When the pair reached the dark, bluesy “Revelator,” feet moved the floor, then the seats.  It was like being right up inside someone’s heart.

The show kept broadening, deepening and getting better with every note. The tickets said “Gillian Welch,” with nary a mention of Rawlings, but that billing really just meant that this one was a place dedicated to her own stories and songs. “One of the treats of touring the country when you don’t have a record out is that you get to play any old song you want to,” Welch explained happily.

The couple pulled out many favorites, including the gospel-based “I Want To Sing That Rock and Roll,” the dust-filled tale of “Annabelle,” and a few classic murder ballads. (“We wouldn’t feel like ourselves if we didn’t leave you with a good killing song,” Rawlings said as he introduced “Caleb Meyer.” ) Welch even joked about the abundance of good ol’ fashioned mules in her songs: “They’re all over if you know to look for them.”

While Welch is often slotted as a retro, old-time singer, many of her songs are completely contemporary in their portraits of people working through rough times in the best way they can. A song like her “Look at Miss Ohio,” with the line “I want to do right, but not right now” could be a theme song for anyone, anywhere, who is looking for a way to walk the line.

The crowd loved every single tune; it was so earnest and fired up, in fact, that there was a premature standing ovation at the closing of “Revelator.”  It was understandable: The song (and Rawlings’ precise and emotional guitar in particular) was unbelievable, and it really did seem like they were getting ready to say goodnight.

But the duo still had plenty of music left, with Rawlings pulling out the stops for amazing licks during the jaunty “Sweet Tooth,” and Welch wildly hamboning and dancing (more carefully) as they sang “Six White Horses.” As the couple continually reached into that cabinet, pulling out capos and banjo picks, it was as if they’d brought a full band. 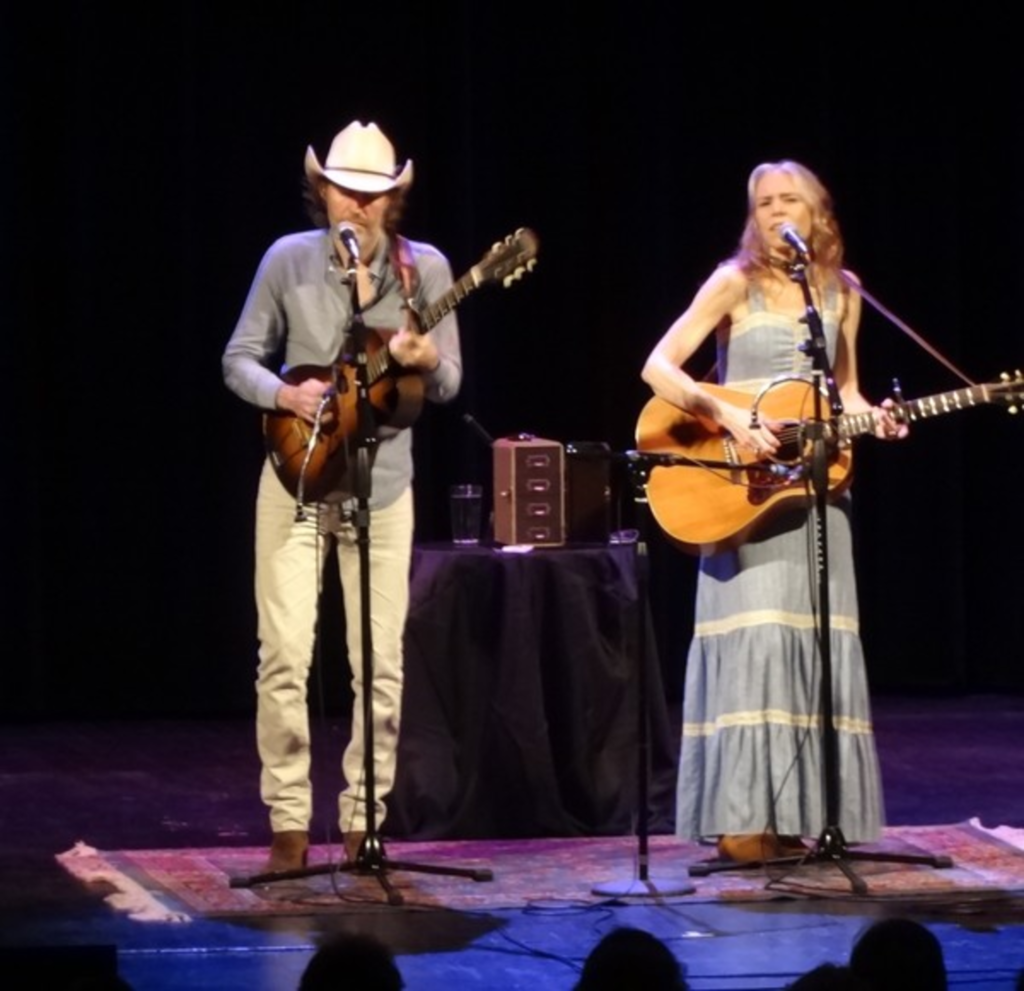 The actual encore began with “Mr. Tambourine Man,” a cover they’d worked up for the Newport Folk Festival’s celebration of the 50th anniversary of Dylan going electric. (“We were kind of on ‘Team Acoustic,’ said Rawlings, with a chuckle.), While that song is as well-used and banged-up as any out there, Welch and Rawlings made its wrinkles their own.

For the last two songs, the audience (with a generous headcount of Kansas City’s own musicians in attendance) and the Folly Theater itself became part of the show again. The singalong for “I’ll Fly Away,” the O Brother Where Art Thou song for which Welch is still most widely known, was transcendent, with the crowd’s own heartfelt singing buoying up the pair’s.

But when Welch and Rawlings stepped away from the microphones and sang “Long Black Veil” (“The first song we sang together,” Welch said), something magical happened. Beyond their intertwined voices and harmonies, the only noise in the theater was the sound of the audience not breathing for fear of missing even a single syllable. That precious sound will resonate for a long, long time.

Setlist:
Wayside Back in Time
Elvis Presley Blues
My First Lover
The Way It Will Be
The Way That It Goes
I Want To Sing That Rock and Roll
My Dear Someone
Make Me a Pallet On Your Floor
Tennessee
Red Clay Halo
(Intermission)
No One Knows My Name
Hard Times
Down Along the Dixie Line
Revelator
Six White Horse
Sweet Tooth
Annabelle
Look at Miss Ohio
—
Mr. Tambourine Man
Caleb Meyer
I’ll Fly Away
Long Black Veil