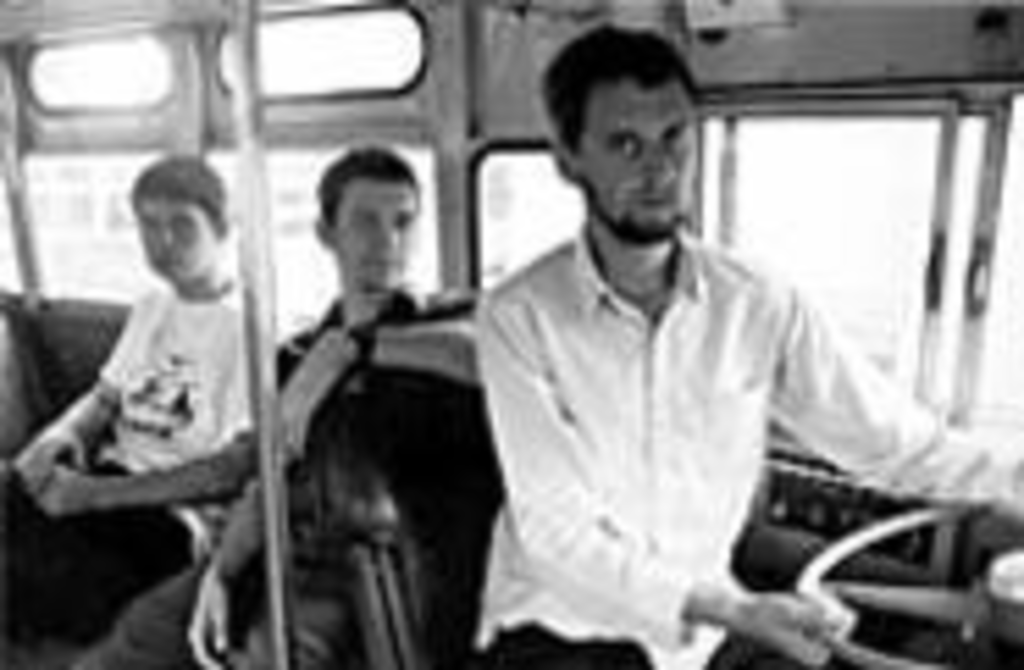 In a scene filled with musicians falling all over themselves (and others) trying to live up to a debauched rock image, Ghosty quietly stands alone. So does its music, which sets singer and guitarist Andrew Connor’s artful musings to a restrained rhythmic backdrop courtesy of drummer Richard Gintowt and bassist Jacob Baum. That’s not to say that the Lawrence-based trio isn’t capable of bringing the rock on occasion. It’s just that Ghosty doesn’t need a sledgehammer to do so.

Ghosty formed nearly three years ago, when Connor and Gintowt met as KU freshmen, playing with a number of bassists before recruiting Baum into the fold. The trio initially struggled to find a following, but it caught on with Lawrence audiences after a splashy second-place showing last spring at a battle of the bands. Last fall, the buzz grew to a dull roar after Connor issued a solo EP, Nineteen Now, Always, that received scads of college-radio airplay and pushed Ghosty further into the local limelight.

“We’ve been really lucky,” Connor says. “For a long time, it was hard for us to get gigs. We really struggled. But something happened along the line where people decided they wanted to let us play shows, and we’ve been milking it ever since.”

Actually, the group has been laying relatively low for the past couple of months, cutting back on live performances and focusing on recording songs in Baum’s home studio. The result of Ghosty’s hibernation can be found on the newly issued Five Short Minutes, a six-song EP that marks the group’s official debut. Though the trio had more than enough material to pack a full-length disc, the constraints of working with Baum’s patchwork studio setup meant cutting back to the essentials.

“We don’t have the technical capability to record our band live, which is what we’d rather do,” Gintowt admits. “So we had to pick songs that made sense to record our parts separately.”

“It’s really cool that we started everything out by doing it completely ourselves,” Connor adds. “It’s a home recording, but it really sounds solid. It’s got charm to it.”

Five Short Minutes is indeed a charmer, a slow-burn effort that opens with an ethereal dreamscape titled “Stopping Short of Getting There,” raising the tempos and energy until closing with the cacophonic remix, “1900 Watts of Love Is Not Enough.”

“Every time I write a song, I don’t want to repeat myself with the next song,” Connor explains. “I try to use new chords and new progressions. Lyrically, I try to go with a new theme. Just when these guys think I might be going in a poppier direction, I’ll come to practice with a more low-key, depressing song.”

Though Connor has written the bulk of Ghosty’s material to date, the EP contains two tracks with which he initially had little involvement. “Another Straight Sonnet,” was originally penned by Olympia, Washington, singer-songwriter Peter David Connelly, and “Faith” comes from Self Help Songs, a full-length from Gintowt’s side project, OK Jones. The original “Faith” featured Gintowt, accompanied by hushed acoustic guitar and harmonica; the Ghosty rendition flips the formula somewhat, cranking up the distortion without getting too carried away. Holstein’s Jeff Jackson also lends a hand on the number, adding splashes of pedal steel to round out the mix. These elements flesh out and define Ghosty, ensuring that listeners familiar with Connor’s popular solo effort won’t be turned off by Five Short Minutes.

“Anybody who likes my solo CD will probably like this,” Connor says. “It’s two different things, but the songs that I wrote on this are pretty similar, if not better, songs than most of the songs on my solo EP. And this band is a band. That was more like people backing me up. But I don’t think it’s a huge departure.”

In the coming months, Ghosty will hit the road for a short burst of regional touring. The trio is also working on a batch of new songs, which Connor promises will continue in the direction of Five Short Minutes, with even more attention paid to poppy hooks and pull-you-in songwriting.

“It’s not like I want to write total pop songs, but there’s a little more of that,” he says. “I still try to be dissonant and complicated, and yet I don’t want to have a million parts. A lot of my old songs have a lot of different sections, because I had too much time to keep going on one song and keep adding and adding. Now I think I edit myself a little more, and I’m better at focusing it down.”