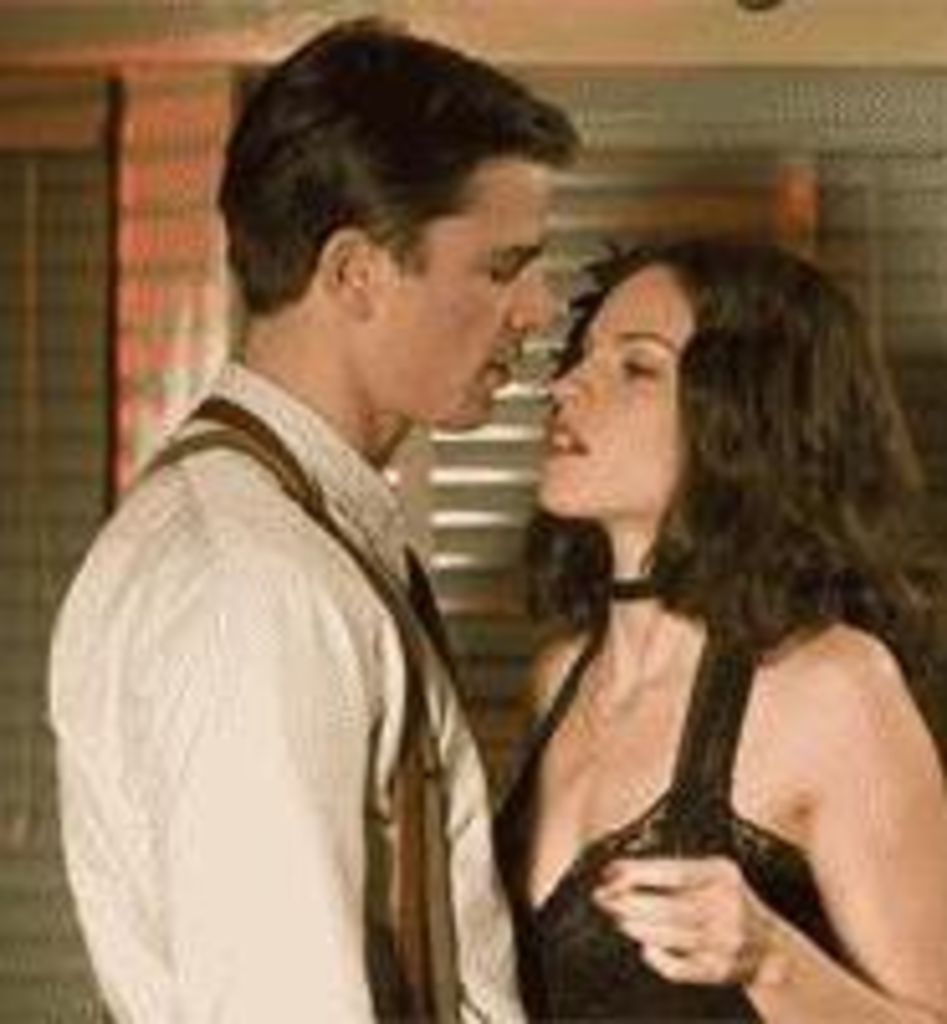 Directed by Brian De Palma from the novel by neo-noirist James Ellroy, The Black Dahlia is a true-crime policier unfolding in late-’40s Los Angeles somewhere between the neighborhoods of Chinatown and Mulholland Drive.

The premise involves one of the city’s most notorious unsolved homicides. In early 1947, the naked corpse of a 22-year-old aspiring actress was found dumped in a South Central lot. She had been cut in half at the waist and surgically disemboweled; her blood was drained, her legs were splayed and her face was carved into a jack-o’-lantern grin. The gruesome details were suppressed, but the mysterious victim (nicknamed in the press for her dark hair and matching wardrobe) entered local mythology as Hollywood’s ultimate lost soul. Many confessed to the crime. The cops, the tabloids and assorted cultists cast a wide net: Celebrity suspects included Woody Guthrie and Orson Welles.

In City of Quartz, historian Mike Davis calls the Black Dahlia murder “the crucial symbolic commencement of the postwar era—a local ‘name of the rose’ concealing a larger metaphysical mystery.” It was a blood sacrifice on the altar of Hollywood. Hewing closely to the first half of Ellroy’s novel, De Palma’s movie is less the tale of the eponymous victim or even the investigation into her death than that of the posthumous spell the dead woman cast on two cops, Bucky Bleichert (Josh Hartnett) and Lee Blanchard (Aaron Eckhart).

Pugilists both, sweet-tempered Bucky and brash Lee meet in the midst of a wartime zoot suit riot and again, for a bit of election-year LAPD promotion, in the boxing ring. They become partners and then an uneasy threesome once Lee introduces Bucky to his girlfriend, Kay (dame du jour Scarlett Johansson), a lush-lipped dish who waves her cigarette holder as though flagging down a ride. Lee and Kay share many secrets. When, in an unlikely date, the trio goes to see the 1928 silent horror flick The Man Who Laughs, De Palma lets his camera linger on Kay’s agonized response to the protagonist’s scarred face. She, we soon discover, has herself been branded.

As Bucky investigates the murder, he pursues a strangely Dahlia-like brunette, discovering that Madeleine (a glamorously unrecognizable Hilary Swank, giving the movie’s sparkiest performance) is a swinger from a rich, powerful and freaky Los Angeles family. Dinner with the folks is nearly as grotesque as the family gathering in Eraserhead. Madeleine’s father, she tells Bucky once they’ve bedded down in an appropriately tawdry motor court, built a firetrap housing development out of movie sets discarded by Mack Sennett. Thus do celluloid fantasies insinuate themselves.

The action is punctuated by suggestive screen tests featuring Mia Kirshner’s bland Dahlia. From a narrative point of view, these interludes are as inexplicable as Bucky’s failure to be bounced from the force for rampant indiscretions, but they establish the Dahlia as the unquiet corpse of every would-be starlet whose heart was ground for dog food. The movies have everything to do with the Dahlia’s desire and the mania this imaginary creature inspires. There are moments when The Black Dahlia projects a spectral world, but its ghosts in broad daylight are elusive at best.