George Floyd’s death changed KC. After Chauvin’s conviction, we’re reminded that we can never go back 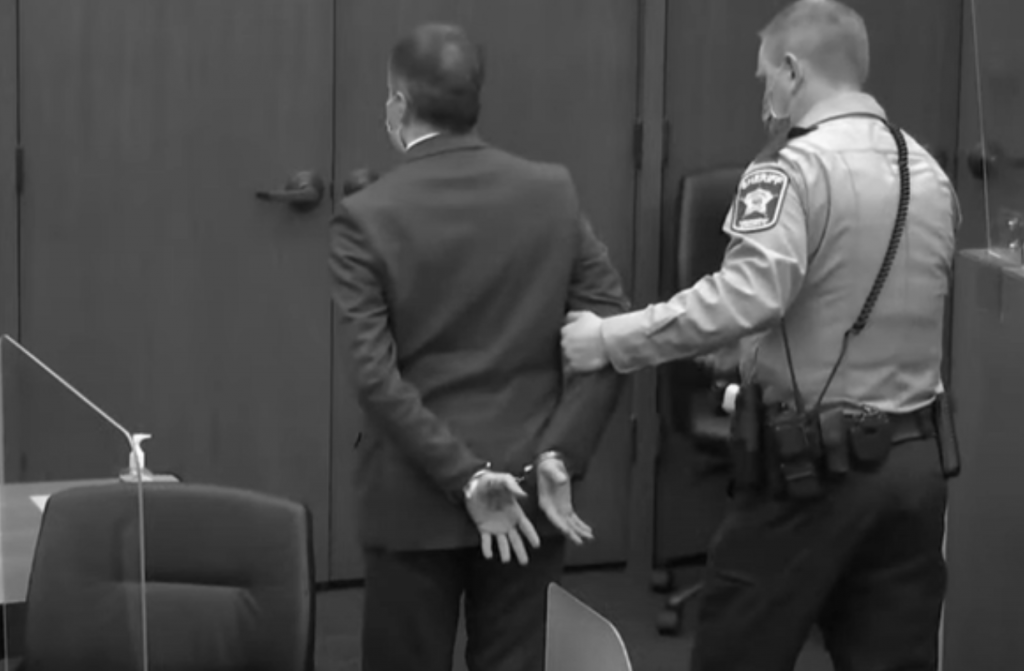 Chauvin taken away in handcuffs after conviction. // Via courtroom livestream.

In the months since police officer Derek Chauvin murdered George Floyd on a Minneapolis sidewalk, a new generation of activists and leaders has taken rise in Kansas City.

So we turn to one of their number, the group that calls itself Black Rainbow, for a response to the news that a Minnesota jury found Chauvin guilty of second-degree murder, third-degree murder and second-degree manslaughter—all the counts brought against him.

“Our hearts are pounding,” Black Rainbow said in a statement. “We are joyful, we are pissed, we are exhausted.”

With the nation holding its breath, a jury convicted a white police officer of doing what we all saw him do—murder a Black man. Yet the guilty verdict against a law enforcement officer was so rare, so just, that no one description can suffice for a collective emotion.

Most of us remember what we were doing the first time we watched Floyd die under Chauvin’s knee. A high school junior, Darnella Frazier, posted a video of the atrocity on her Facebook page the day after Memorial Day, and it rocked the world.

Kansas City hasn’t been the same since, and it never should be again.

Within days, protesters were on the Plaza. Black residents turned out to shout their rage against law enforcement that brutalizes them and deems them to be criminals the minute they leave their homes or drive a car. And this time, white Kansas Citians were with them. Those protests in the early days of June, when a crisis more urgent than the pandemic pulled us out of our homes, drew as close to an integrated crowd as we see in these parts.

It’s taken too long, but the graphic video of Floyd’s murder made allies of people who understood, superficially, that we have a race problem in America, but who never internalized it until they watched Chauvin casually rest his full weight on Floyd’s neck, while the handcuffed man gasped for breath and cried out for his mother.

Black Lives Matter signs sprouted like sunflowers in neighborhoods where Blacks ought to live, but don’t, because we have a long history of segregation here. Church groups and book clubs rushed to order White Fragility and How to be an Antiracist. Black-owned restaurants and shops saw an unexpected rush of white customers.

Those are all good but symbolic gestures. The hard work has only begun.

Those fevered nights in June, protesters in Kansas City faced off from police across a street formerly named J.C. Nichols Parkway. In little more than a month, that name was wiped off the city’s map. The Kansas City Board of Parks and Recreation Commissioners correctly decided that a man who promoted restrictive racist covenants should not be honored with his name on a prominent roadway. The Nichols name also came off of the fountain on the southeast corner of the Plaza.

Not so easily removed is the rift between much of Kansas City’s community and its police department. It was there in stark focus during the nights on the Plaza, when police deployed tear gas and pepper spray into crowds of mostly peaceful protesters. But it was there long before, like an open wound, as Black Kansas Citians chaffed over unwarranted traffic stops and grieved the lost lives of Ryan Stokes, Donnie Sanders, Cameron Lamb and other Black men killed when encounters with Kansas City police went wrong.

And the rift is there now—as Kansas Citians watch their state-appointed Board of Police Commissioners close ranks around a department and chief that resist change and remain distanced from citizens and neighborhoods.

Of all the nation’s major cities, only Kansas City’s police department is run by a board whose members are appointed by the state’s governor—currently, a Republican leader who used to be a rural sheriff and has little knowledge of Kansas City and the complexities of its neighborhood and police issues.

It’s a ridiculous, demeaning situation that absolves the police department from answering directly to the citizens it serves and the leaders they elect to office. Local control of its police force is the single biggest change Kansas City can make in the aftermath of George Floyd’s murder and Chauvin’s conviction of it.

Floyd’s loved ones, and Black Americans, obtained a measure of justice in the Minneapolis courtroom. Now it is up to the rest of us to find justice in our streets and cities.

Again, we turn to Black Rainbow, which stated the challenge with exquisite simplicity in its statement: “Justice is not police, prisons and jails. Justice is a world where Black and brown people can live in freedom from terror and have long, healthy lives.”