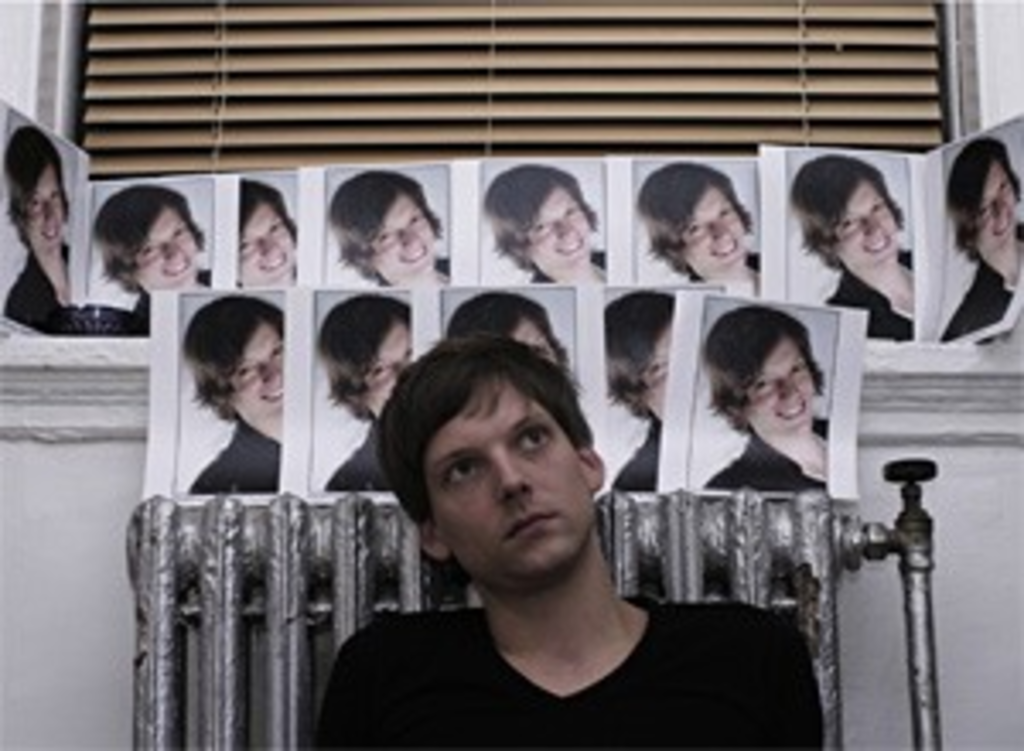 Looking at Babyteardrops.com, you might think the site is some bizarre joke. Clip-art roses and butterflies reminiscent of some mall chick’s “tramp stamp,” curlicues against a painfully carmine backdrop, text that flashes: Welcome. Baby Teardrops. Please Enjoy Some Music. A blond-haired man’s face hangs center, drenched in high-contrast coloring, his pink lips pursed. Although his possessed brown eyes focus slightly to the left, they burn holes right through you, no matter how you shift your monitor.

The effect recalls those creepy Jesus portraits you pick up at small-town truck stops for kitsch value.

And what the hell kind of too-precious band name is Baby Teardrops, anyway?

“The name’s up for contention,” says Matthew Dunehoo, he of the crazy eyes. “It’s ridiculous but seemingly appropriate. I don’t know how it got into my head, but it stuck. It’s either Baby Teardrops or Chicken Noodle Basketball,” he jokes (we hope).

Look past the name and the tacky Web site, which was actually designed to resemble an Indian restaurant menu, and click on the “Main Course” link. As the 10 lo-fi, slightly familiar, super-hooky songs stream through the speakers, it’s clear that Dunehoo is anything but joking.

Last January, the Kansas native moved to New York City. With his absence came a gaping void in the local music scene. As creator and leader of Doris Henson, he shaped one of KC’s most celebrated rock groups of the past five years. Doris skirted the brink of national recognition. Before its demise in October 2006, the band opened for Billy Corgan on tour; released its second album, Give Me All Your Money, on respectable (and now-defunct) indie DeSoto; and even got shout-outs from Pitchforkmedia and Spin.

At the band’s farewell show, fans packed the Record Bar for their last chance to bask in Doris Henson’s radiant, cocksure yet vulnerable brand of guitar- and horn-driven pop. Some people even cried.

“The recognition made me happy and proud,” Dunehoo says over dinner at the Reade Street Pub in Tribeca. “But toward the end, I didn’t feel I was being good enough. My heart was weak. I lost a lot of pleasure in what I was doing.”

So, as many other artists looking for a big break do, he took up residence in the city that birthed the Velvets, Television, the Ramones and countless other music behemoths. It’s also a place where people as hungry as Dunehoo (but perhaps not as talented) spend the rest of their lives languishing in obscurity.

“To be here, you have to want to be here,” he says. “It takes discipline, but the rewards are pretty outstanding.”

Dunehoo spent his first months in New York writing new material. He bought a Macintosh and learned how to record demos digitally. After he was satisfied with the new batch of songs, he started contacting musicians over Craigslist to help him realize his vision.

“These were my songs. I wanted them to be played how I’d written them,” he says.

He took much the same approach when he formed Doris Henson in 2002. The difference with Baby Teardrops is that he didn’t start the band with good friends.

“I wanted to stay as emotionally disconnected with the people as I could, to keep it professional,” he says. “Luckily, I ended up with nice folks with whom I had more of a connection than I thought I would.”

But before he even had a lineup solidified, he already had a record in the can.

“I just wanted to make another band real,” he says of the urgency to make the album.

Dunehoo called upon old friend Mike Myers (drummer for In the Pines, the String and Return and Hundred Years War) to fly up and help out. Recorded in August by Fischerspooner’s live sound producer, Ellis Traver, at his Williamsburg, Brooklyn, studio, the 10 songs are grittier than Doris Henson’s technically polished work but still recall that band’s jarring, cyclical guitar and Dunehoo’s manic vocal delivery.

Teardrops is still in its infancy, with only four shows under its belt. Thanks to a contact that Dunehoo made when Doris Henson played in New York, Baby Teardrops has a residency at a bar on the Lower East Side. Every fourth Tuesday, Dunehoo invites other fledgling New York bands to share the stage.

“I’d never really used MySpace before,” he says. “But I’ve made some new friends, and it’s been great.”

Dunehoo befriended three other bands and their fans last month, most of whom stuck around for Baby Teardrops’ 11:30 p.m. slot.

The band started with “Banged in the Heart.” With bassist Megan Thomas joining him on vocals, Dunehoo began to chant the main hook, Banged in the heart for a curious time, hypnotizing the attentive crowd. The following songs were like the first: quiet, almost timid. Then, halfway through the set, Dunehoo took on a swagger, moving his body and turning his phrases in the manner that made him one of Kansas City’s most amiable frontmen.

The music was sharp, and that night proved that Teardrops is able to do something rare at most New York live shows: Get people to dance. And not just an occasional hip pivot or head nod. There was some full-on Molly Ringwald dancing happening, just like at the shows heplayed back home.

“In Kansas City, I was in a constant panic. ‘I’m static! I’m static!’ But I love and am grateful to the place,” he says. “I have nothing but good things to say.”

“Here [in New York], I’ve felt a lot less pressure to be some great artist,” he says. “I’m content with enjoying the creative outlet I’ve worked so hard to maintain.”

Which isn’t to say the guy doesn’t still have plans for a big future, to quote a Doris song.

“I’m hungry for recognition. I’m lusting after that,” he says. “I can’t help but feel crazed. I love music so badly. I want to give in to it.”

Give in to it, Matthew. Just seriously reconsider the band name, maybe?