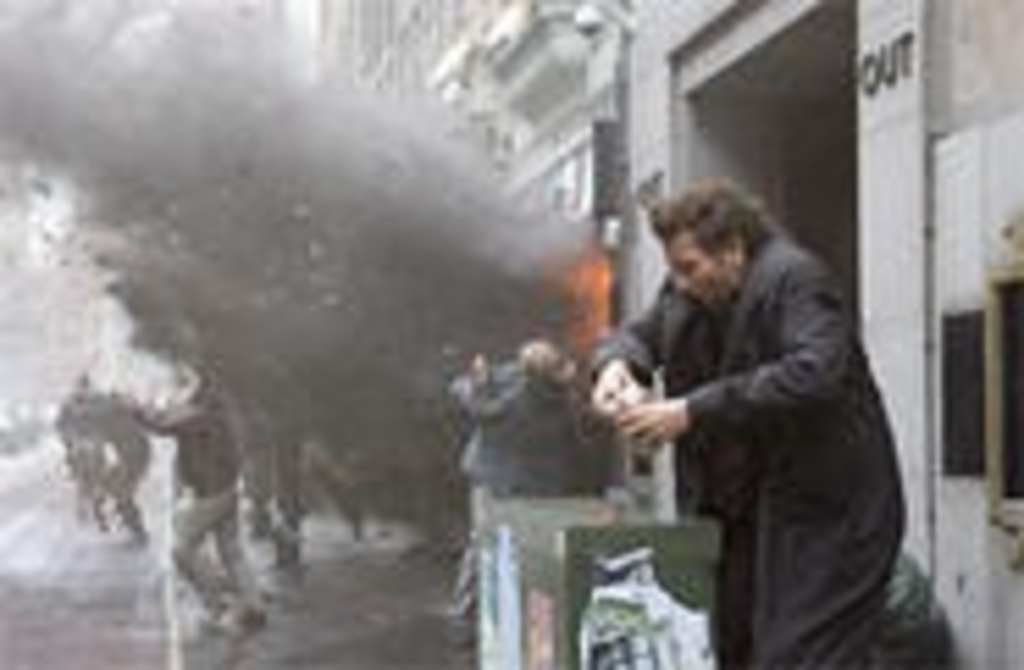 Eleven winters ago, Universal had the season’s strongest movie — a downbeat sci-fi flick freely adapted from a well-known source by a name director. With a bare minimum of advance screenings and a pointed absence of hype, the studio dumped it. This year, Universal has done it again.

The 1995 castoff was 12 Monkeys, Terry Gilliam’s remake of Chris Marker’s La Jetée. This year’s victim is Children of Men, Alfonso Cuarón’s dank, hallucinatory, shockingly immediate version of P.D. James’ novel. Never mind that Cuarón saved the Harry Potter franchise and, with Y Tu Mamá También, directed the highest-grossing Spanish-language movie ever released in America. This superbly crafted action thriller is being treated like a communicable disease by the studio releasing it.

This despite the vivid Fleet Street terror bombing that establishes London 2027, the deadly car chase — shot in what looks like a single take — and the year’s most brilliantly choreographed action sequence. Children of Men vaults into another dimension with one more long-shot tour de force as Clive Owen’s protagonist dashes from a nightmare prison camp through an urban free-fire zone, cradling a newborn baby. Not since John Woo’s Hard Boiled has an infant been so jeopardized.

With five screenwriters (Cuarón included), it’s impossible to give credit for the intelligent path that Children of Men takes through James’ 1992 novel, preserving while enriching her allegorical premise. Humanity is facing its own extinction — not through nuclear proliferation or global warming but rather the end of fertility. Like James’ book, the movie opens with the violent death of the world’s youngest person (18-year-old “Baby Diego,” stabbed by an irate fan in Buenos Aires) and imagines what might happen if the human race were granted a miraculous second chance. Universal may have deemed Children of Men too grim for Christmas, but it is premised on a reverence for life that some might term religious.

The year is 2027, but the mood is late 1940. The U.K. is a mecca for illegal immigrants as well as a bastion of neo-fascist homeland security. London’s smog-shrouded smear of garbage, graffiti and motorcycle rickshaws is the shabbiest of havens. Armed cops are ubiquitous, and refugees are locked in curbside cages. Religious cultists parade through the streets. Terrorists and looters control a despoiled landscape poignantly dotted with long-abandoned schools.

Enormously sympathetic, as always, Owen plays a wry and rumpled joker, less an actual character than a nexus of connections. His ex-wife (Julianne Moore) is an underground revolutionary, and his buddy (Michael Caine) is a scene-stealing old hippie with a secret house in the woods. He has a well-off cousin in the government (Danny Huston) who lives in what looks like a South Bank power station amid recovered artwork, including Michelangelo’s “David” (missing a leg) and Picasso’s “Guernica,” and no longer worries about tomorrow. Owen’s warmth is such that everyone trusts him, including animals and a mysterious young woman (Clare-Hope Ashitey) who needs to be smuggled through the countryside.

It’s a measure of Cuarón’s directorial chops that Children of Men functions equally well as fantasy and thriller. Like Spielberg’s War of the Worlds and the Wachowski brothers’ V for Vendetta (and more consistently than either), the movie attempts to fuse contemporary life with pulp mythology. The war against terror and the battle in Iraq are most powerfully present in the aforementioned set piece, during which Owen escapes a nightmare Gitmo into the exploding rubble of an incipient Fallujah. Scenes that express the solace of solidarity or the fragility of human life are viscerally bleak, when not totally brutal.

Infertility is only a metaphor that enables Children of Men to entertain the possibility of no future. The only parents these days who assume that their children will inherit a better world are either the super rich or the immigrants imported to tend their gardens. That these refugees are visualized as the persecuted rabble of a crumbling empire is but one of this movie’s inconvenient truths.