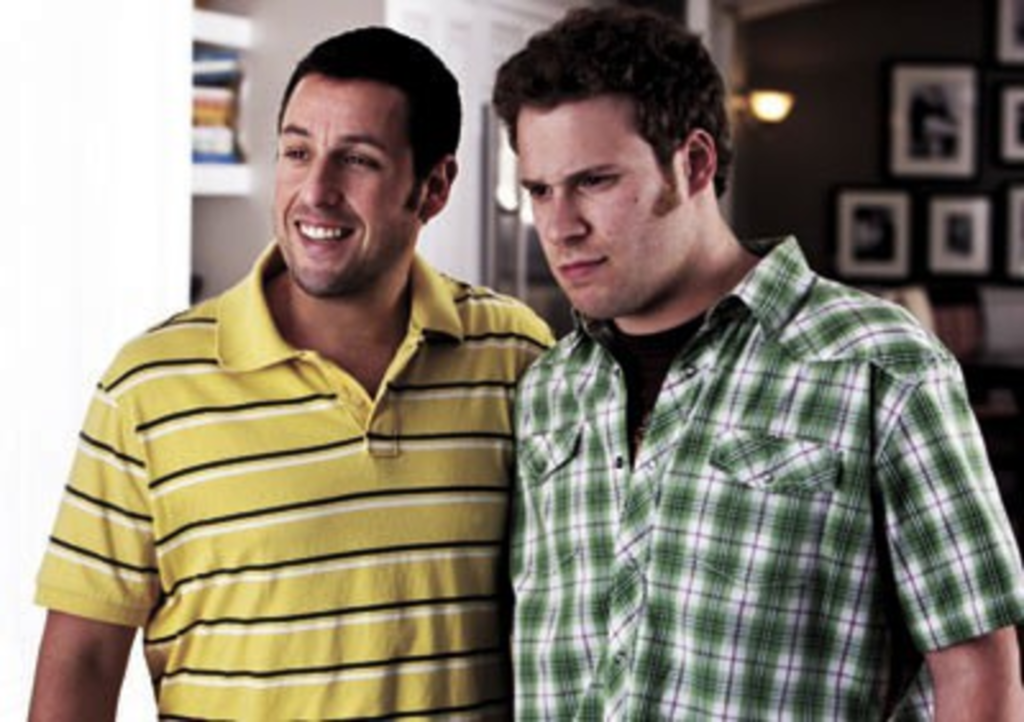 After devoting his first two films (as director), The 40-Year-Old Virgin and Knocked Up, to getting laid and having kids, respectively, Judd Apatow brings the circle of life to a close with Funny People, which stars Adam Sandler as George Simmons, a popular, Sandler-esque movie star diagnosed with a rare and potentially fatal form of leukemia. When actors and directors start thinking outside themselves and start worrying about how to get more respect or be taken capital-s seriously, it’s almost always a recipe for disaster. Mercifully, Funny People is probably the least bathetic, self-pitying movie about death and dying to come out of Hollywood since Albert Brooks’ Defending Your Life.

When he receives his diagnosis, George doesn’t sit around feeling sorry for himself or set out on some inspirational quest to do everything he ever wanted to do before he dies, or any of the other things people in movies tend to do in the same situation. Instead, he resolves to fight this thing the best he can and get on with the business of living.

That’s not to say George doesn’t go through his share of denial, anger, bargaining and depression en route to accepting his condition. There’s a great, discomfiting scene early on in which he lapses into a dark, stream-of-consciousness riff during a stand-up set at the famous Comedy & Magic Club in Hermosa Beach, leaving the audience uncertain about whether they should laugh. After George implodes, a twentysomething actor and comic named Ira Wright (Seth Rogen) takes the stage and makes light of George’s gloom, winning laughs for doing so. Later, when the comics meet up in the parking lot, George tells Ira that he would have done the same thing when he was his age, and eventually asks him to come write jokes for him.

So the world of the dying comedy legend intersects with that of the hungry up-and-comers — not just Ira, but his roommates, Leo (Jonah Hill), another aspiring actor-writer, and Mark (Jason Schwartzman), a hilariously pompous pretty-boy actor who has recently landed the lead in a not-very-good high-school sitcom. Apatow clearly knows a lot about the competitiveness and petty rivalries of showbiz people desperate to get their feet in the door. Ira realizes that George is his big break, and Apatow shows us his willingness to exploit his close proximity to a famous person — dying or not — for all it’s worth. And there are other things Apatow observes so well, yet so indirectly, that you wonder if people who haven’t lived in Los Angeles and known people like these characters will fully appreciate them.

In fact, there’s so much that’s so disarmingly good and sharp about Funny People that you wish the whole movie weren’t so much of a shambles. I’ve seen Apatow’s film twice. Both times, exactly halfway into its two-and-a-half-hour running time, I have noticed tiny fissures forming in the fuselage. That’s about the point in the movie when George goes in for a checkup and learns that the experimental drugs he has been taking seem to be working and he may no longer be dying. “Get back to your life,” the doctor intones, and the rest of Funny People is about George’s dawning realization that he doesn’t much like the life he had before, socializing with celebrity pseudo friends and perambulating his giant mansion, surrounded by mountains of useless swag. So he decides to reconnect with his ex-girlfriend, Laura (Leslie Mann, the real-life Mrs. Apatow), whom he cheated on 12 years ago and who now has a new life with a businessman husband (Eric Bana) and two young daughters (played by Apatow’s own kids, Maude and Iris).

It’s hard enough for a movie to withstand the introduction of a whole set of major characters past the point when most movies are wrapping things up, and it’s even harder when those characters feel so incongruous to everything that has come before. On the one hand, Laura and her brood should seem incongruous to George and his solitary life, but the feeling is one of a different, unintentional mismatch. When George and Laura have their first big scene together, it doesn’t feel like these two people have a whole shared history together.

Apatow has been accused of not writing good parts for women — unfairly, I think. But here, the accusation sticks because Laura’s inner life hasn’t been thought out nearly as well as that of George, Ira and all the other guy parts, and the character ultimately becomes a cog in a series of third-act plot machinations that betray the organic feel of the earlier scenes.

A movie that strives to convey the depth of feeling and the range of emotion that Funny People so clearly does badly needs at least one moment of cruelty comparable to the fake tears of William Hurt’s reporter in Broadcast News or the betrayal of Nick Nolte’s over-the-hill film star by a bubbly young assistant in I’ll Do Anything. Apatow has plenty of opportunities, but the closest he comes — a scene in which George callously checks his cell phone while Laura is held tearfully rapt by a family home video — makes only a softball impact. For a movie with countless dick jokes and in which the final clearly audible word of dialogue is “balls,” you wish that Apatow’s own cojones were a wee bit bigger.