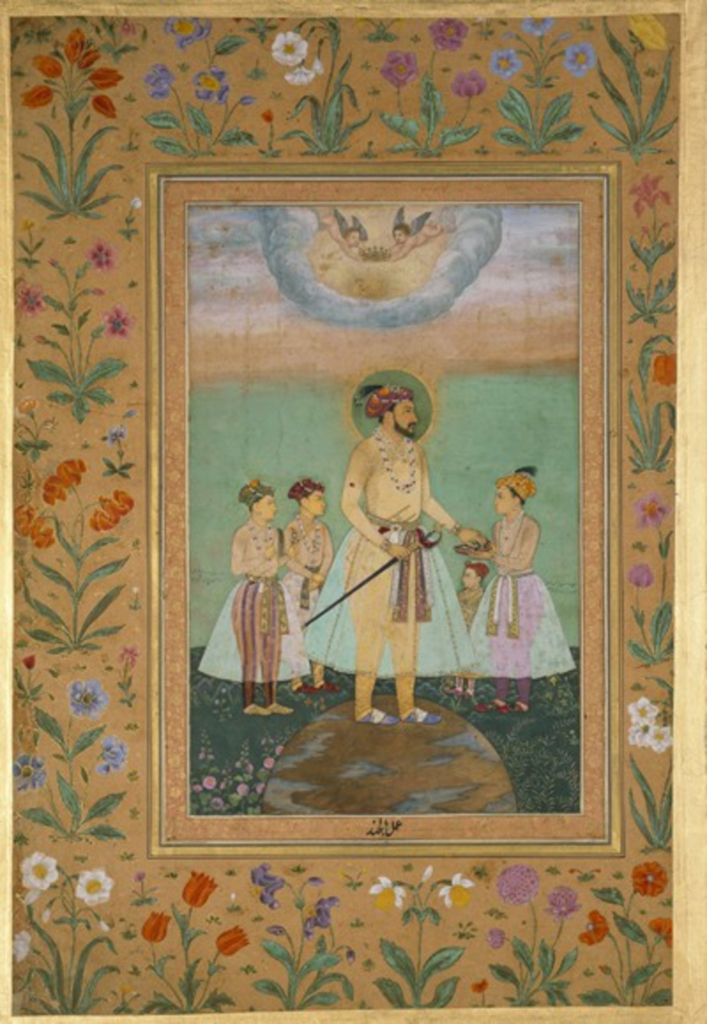 If the devil is in the details, then even the most bored art devotee will be seduced by the manuscript paintings that make up the Nelson-Atkins Museum of Art’s new exhibition. Rapturous devotion to the minutiae of costume, jewelry and gesture intensifies these images. If you love books and painting, not much bests these ornamental manuscript pages, with their crisp details, uncommon color choices and rich subject matter.

Organized by the exhibition touring company Art Services International, the exhibition arrived at the Nelson with the title Muraggá: Imperial Mughal Albums From the Chester Beatty Library, Dublin. Descriptive, yes, but also dry and a wee bit tedious. The museum has sexed up the title and eliminated the original’s distracting geographical schism. From the Land of the Taj Mahal: Paintings for India’s Mughal Emperors in the Chester Beatty Library is still an accurate name for what’s on display.

India’s two most powerful 17th-century Mughal rulers — Jahangir and the more famous Shah Jahan, who is best-known for building the Taj Mahal — commissioned this group of manuscript paintings when most of India (what is now Pakistan and India) was a single Islamic empire. The word Mughal is a derivative of Mongol; the Mughals traced their lineage to Genghis Khan, that most famous of all Mongolians. All of these individually framed images are from books made exclusively for the private collections of these rulers, suggesting the rulers’ impressive and sweeping quest for knowledge. Still more impressive is the acceptance that these manuscripts seem to promote. The Mughals were Sunnis, but they reigned over a vast country of diverse religions, including Hinduism and Chishti Sufism. Even Christian images, including the Virgin Mary and Jesus Christ, appear in these tiny paintings.

In “Shah Jahan and His Sons on a Globe, c. 1627-30,” the shah stands atop the world (though his four sons technically stand on terra firma), while putti descend from the clouds to crown him. The putti suggest influence from Western painting — think Italian — as does the halo behind Shah Jahan’s head, alluding to the worldly and wide-ranging attitudes of Mughal life at court. Persian literature and other cultures’ arts and customs were clearly seen and appreciated there.

The tiny paintings in the margins and borders of the pages are sometimes more interesting than the main images. Filled with flowers and other representations of the natural world, the marginalia have a life of their own, showcasing Islam’s dedication to surface adornment. According to the oral traditions of Hadith, “The first of Allah’s creation was the pen,” suggesting the critical importance of translating the sacred text of Islam throughout the world. Calligraphy, then, was one of the most important Islamic art forms, and the calligraphy on these manuscripts is just as beautiful as the rest of the intimately detailed imagery.

In an exhibition in which each tiny painting is like a bejeweled icon, a person could go crazy trying to take in all the ecstatic details. But don’t go insane. Instead, give yourself a decent hour or two, grab one of the magnifying glasses that the museum provides, and explore this dazzling phantasmagoria.