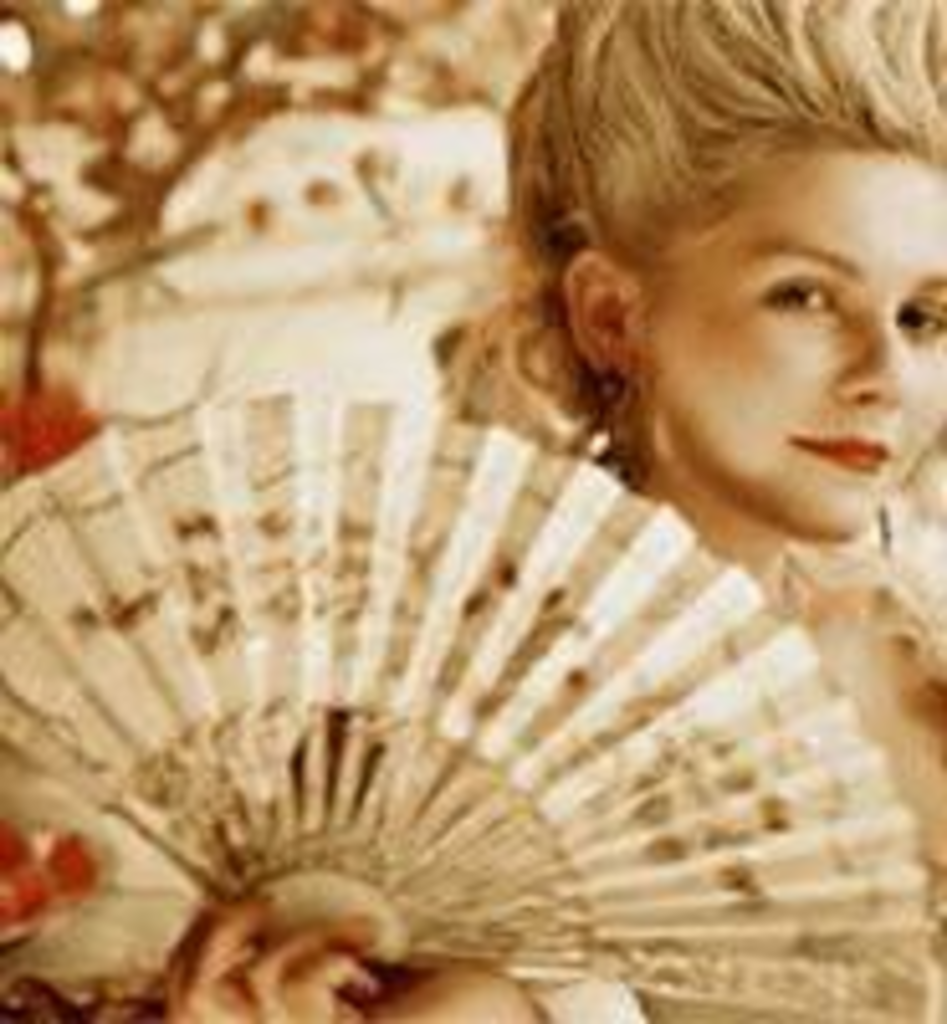 Famously shy writer-director Coppola may be an inscrutable personality, but her bold exposé of royalty opens with a big wink and a few crashing chords, courtesy of Gang of Four. A slice of Austrian apple strudel imported to marry the 15-year-old French dauphin, Marie Antoinette (Kirsten Dunst) arrives nakedly vulnerable in Versailles. Here, as with Coppola’s previous features, an unformed young woman must find her way in a confusing, if stylish, world — it’s as though the defining moment in the filmmaker’s artistic life was her arrival as a 20-year-old actress on the set of Dad’s The Godfather: Part III.

Basically a small story in a gilded frame, with relatively little dialogue to distract from the spectacle, Marie Antoinette is not without a certain vérité. When it premiered last May at Cannes, few foreign journalists missed the opportunity to compare the rigid hierarchies and inexplicable protocols of the French court with those of the film festival. (Marie’s naïve complaint, “This is ridiculous,” squelched by the haughty rejoinder, “This, madam, is Versailles,” got the movie’s biggest laugh.) Coppola, who directed what remains Scarlett Johansson’s least mannered performance, here “documents” Dunst’s innocent boredom as she takes solace in jewels, clothes and sweets. The ruling complex is more edible than Oedipal.

Cued by Bow Wow Wow’s “I Want Candy,” Coppola’s pink-and-pistachio color schemes and sugar-frosted mise-en-scène, all heaps of haute cuisine and powdered towers of hair, are nothing if not easy on the eye. (As a representation of the late-18th-century good life, her images are closer in their shiny opulence to Fragonard’s paintings than Watteau’s.) There’s no disputing Coppola’s adroit party planning or her delicious casting. Talking from the side of his mouth as though swapping yarns at the Lion’s Head, Rip Torn makes a swaggering Louis XV; a confidently skanky Asia Argento is no less hilarious as his paramour Madame du Barry. Coppola cousin Jason Schwartzman is suitably diffident as the future Louis XVI. Steve Coogan and Judy Davis are droll courtiers; Marianne Faithfull is an appropriately grand Empress Maria Theresa.

When the king dies, the young people are stunned, but Marie, whose valley-girl enthusiasm has already inspired a snooty opera audience to applaud the show, rises to the occasion. Cover girl avant la lettre, she becomes queen of the all-night rave, takes a lover and, with motherhood, creates her own domain. (Marie Antoinette seems haunted by the specter of Diana Spencer, another royally persecuted broodmare who, as noted by Camille Paglia, also met a violent end, pursued by a mob in France.)

Carefree proprietress of a miniature play farm, Marie A. takes the notion of a people’s princess literally. She masquerades as a milkmaid and reads Rousseau to her ladies-in-waiting. What could be more decadent than such fashionista rusticity? Coppola, however, is temperamentally unable to distinguish history from personality and personality from dress-up; the filmmaker’s attempt to redeem her heroine’s shallowness reveals her own. The more problematic aspects of Marie’s reign — the embarrassing “affair of the necklace,” her mega-Imelda clothes budget, and her likely treason against the revolution are airbrushed away.

Marie’s gravitas arrives like a bolt from the blue; the bubble bursts, and the movie crashes to earth at the moment when, informed of her legendary one-liner, the queen turns serious: “I would never say that.” Whatever. Coppola ends on the image of a tragically trashed imperial boudoir. Let ’em lick icing.