Free State Brewing Co. teams with the Roaming Pint on a Black Ale, out Tuesday 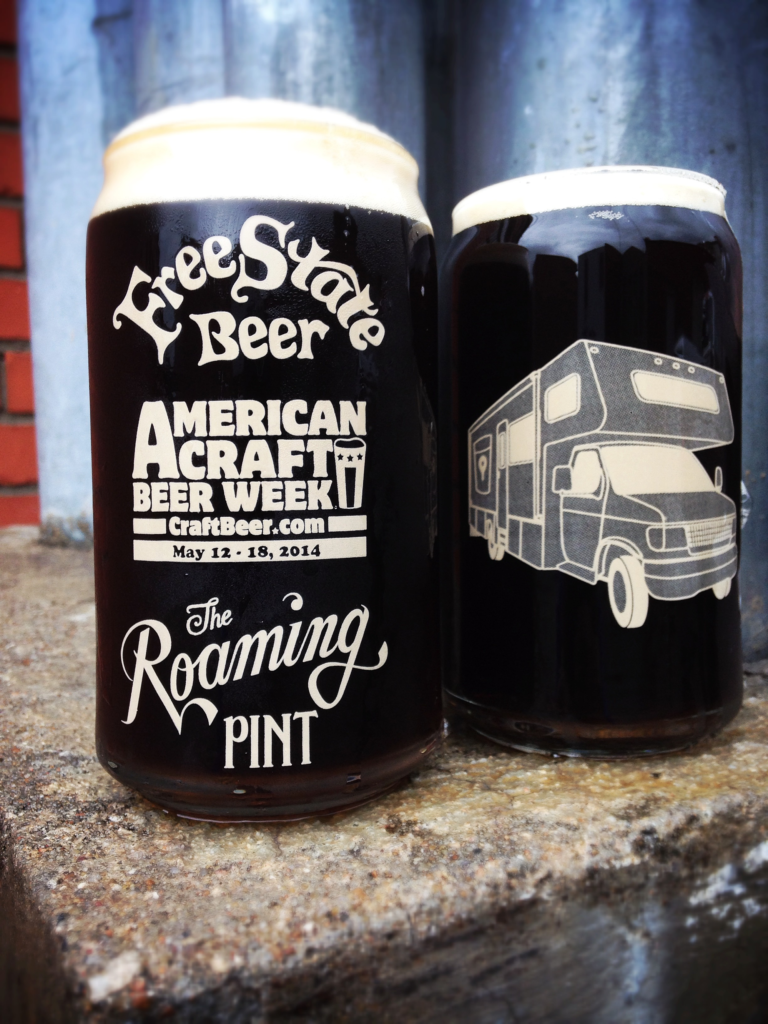 Not everyone gets to collaborate with their favorite brewery to make a beer.

Maria Scarpello and Brian Devine, the traveling beer bloggers of the Roaming Pint, are the lucky ones. They had wanted to make a beer at their favorite brewery – their hometown brewery – Free State Brewing Company. But their traveling schedule never seemed to match up with Free State’s brewing calendar. That was until April 23.

“I was able to clear up some space in our brew schedule to do something,” says Free State head brewer Geoff Deman. “So I got back to Brian and I said let’s do this.”

Devine and Scarpello happened to be back home in Lawrence on a monthlong break from their cross-country RV journey for good beer, which started in 2010. So Deman reached out to Devine and Scarpello, and within a couple of days, the three met to hash out the beer’s flavor profile, which was Scarpello’s idea.

“She really likes dark beers,” Deman says, “so she basically said, ‘I like anything black.'”

They discussed Free State’s past special-release beers, the appropriateness of the beer for this time of year and other flavors Scarpello and Devine wanted to taste. They thought about doing a coffee beer but decided they could get the roast-y flavors form dark malts. They decided to used chocolate rye for “a little bit of pepperiness” and a different strain of yeast than what Free State normally uses, Deman says.

“We wanted it to be hoppy but balanced, not over the top aggressive,” Deman says. “Maria is a bigger fan of the malt profile of beers, so we didn’t want to get too aggressive. But it’s got a real nice hop balance. A lot of chinook, which goes really well with dark beer, and some galaxy and Amarillo. Then we dry hopped it with some chinook as well.”

Deman says the beer has a pilsner malt base and some amber malt base to add a chocolate note. They also added oats to “give the mouth feel a boost” and Crystal 50/60 “for a hint of sweetness.”

“We got together at 4:30 p.m. on that Wednesday, and then I had to take all of those ideas that we talked about and put them into a recipe and make sure that we had them on hand,” Deman says. “We brewed it that next day. It was kind of a fun, on-the-fly collaboration. And it’s been ongoing since then. They came in and helped us brew the beer that day. We’ve been having them come in and taste the beer throughout its gestation. And then working back and forth on this glassware as well. Brian is a designer, so he basically put together the design that the glass will take.”

The result takes the name of Scarpello and Devine’s blog, the Roaming Pint, an American black ale. Free State launches it Tuesday, May 13, with a firkin tapping on the brewery’s front porch and a special collaboration pint glass as part of American Craft Beer Week, which started Monday.

Deman expects the Roaming Pint to be available on draft for a few weeks.

“We did a full batch. We made a 14 barrel batch,” Deman says. “Specialty beers like that we typically go through pretty quickly.”

The collaboration glass will also be for sale.

Free State has another special beer coming up to celebrate the Dirty Kanza 200, a one-day, 200-mile gravel bike race through the Flint Hills. They’re calling it the Dirty Kanza Kölsch.

It’ll debut just in time for the race, which takes place May 31.