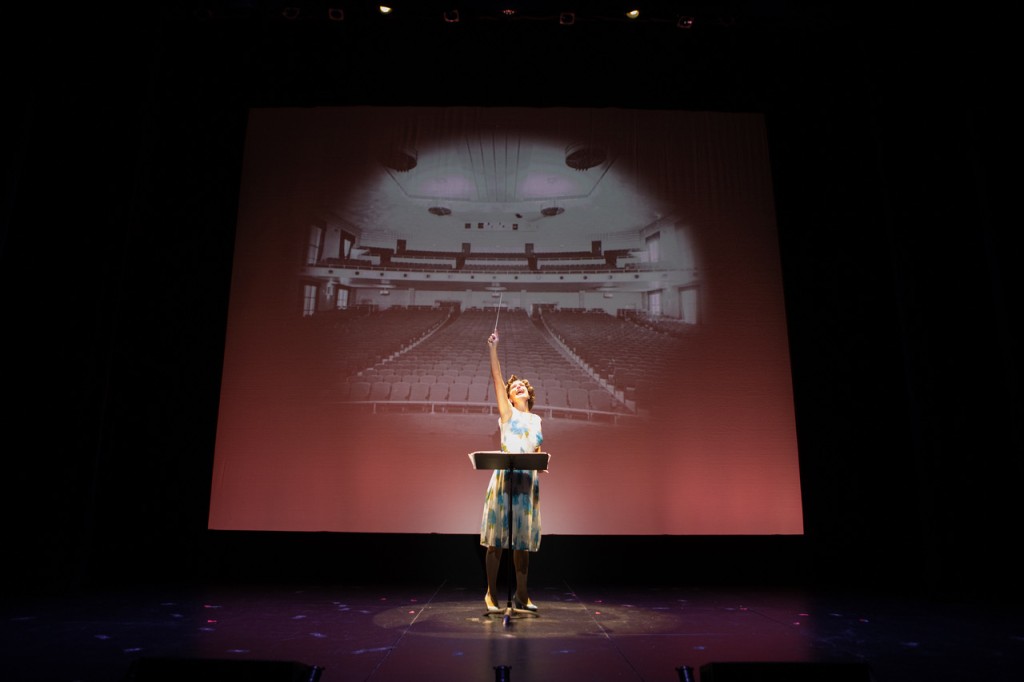 In Theatre in the Park’s upcoming musical Always … Patsy Cline, performer Krista Eyler tackles the eponymous role with her usual gusto and enthusiasm. Good thing, too, as she and co-star Stasha Case—who plays Cline’s galpal, Louise Seger—tear through more than 27 songs per performance. (We’re winded just thinking about that.)

For Eyler, she seems excitedly unphased. The veteran musical theater maven has performed on nearly every stage in the metro. And when she’s not busy performing, you’ll find her composing her heart out—she helped pen Overture the Musical, a 2019 Grand Jury Next Link Selection for the New York Musical Festival (NYMF) and winner of Best of Fest Audience Choice Award-2019 New York Musical Festival.

Oh, and—no big whoop—Eyler is also an educator extraordinaire. She’s known as KC’s own Funky Mama, teaching original rock n’ roll music to kids, moms, and dads. We sat down with the songstress between rehearsals to ask her our list of wildly mindless questions. She didn’t disappoint.

The Pitch: What fashion trend or accessory deserves to make a comeback?

Krista Eyler: I was obsessed with Adidas Gazelle shoes in high school and now have to scour eBay to find the OGs of the brand (circa 1990-1994). I was a soccer player (a decent midfielder/striker) in high school and college, and, at that time, Gazelles were the shiz among the girls on my team.

My best friend had so many of the colors, and when she got tired of a pair, I snagged them. My favorite Gazelles were adorable in royal blue, but I believe I stole her black ones.

I remember being crestfallen when I found out my college team wore Lanzera. Seriously? LAN-fugly-ZERA?

What’s the worst wig/costume/ensemble you’ve ever worn on stage?

In an outdoor production of Alice In Wonderland, I played multiple roles which included a moon, a dancing flower in spandex, and the DoDo. Typecasting, I know.

As the moon, I was to sing some lyrically high-soprano things, but the styrofoam/cardboard/duct taped mask laid flush to my face, so pretty much the moon was unintelligible and suffocating. I’m sure the sound of the cicadas was better than the sounds that were released from my flattened face. Our director seemed to be high most of the time, so I honestly can’t say if Alice ever made it home. I still wish her well in her journey—she would be 30 by now.

Though I loved playing the title role in Evita, my wig-change when commoner Eva Duarte turned into platinum-blonde Evita was a cross between Norman Bates’ mother and George Washington.

When I tried it on, I remember thinking, “How would Eva feel about being a possible candidate for the Daughters of the American Revolution? That’s politically complicated.” Kind of like a big, white-bread helmet of synthetic hair. If you squinted from the audience, I’m sure it was fine.

What was your favorite stuffed animal/toy growing up?

My favorite stuffed animal was my bear, Winnie. Nothing fancy. Just a small Winnie the Pooh from the late 1970s. He traveled with me everywhere and was my bedtime companion, always. My sons both used him, too, which was special, and Winnie is now packed away for grandchildren if I am ever so blessed.

I have a fun picture of me reading in bed around 1986 with my favorite things at the time: my Walkman, my Michael Jackson book, and my Winnie.

What food did you loathe as a child but willingly scarf down now?

I believe my parents stopped inviting people over after the incident with lasagna when I was 6. Lasagna made with cottage cheese is the most disgusting invention, and my body apparently proved that point during this fateful dinner party with neighbors circa 1983. I am now a ricotta-only, ricotta-ride-or-die lasagna eater. Cottage cheese, you’re drunk. Go home.

As I sat at the kids’ table in the kitchen, my cottage cheese-filled abomination somehow slipped to the floor. I leaned over to pick it up and clearly saw the grotesque amalgam of curd and crud beneath me. My stomach revolted, and whatever I had eaten previously made a mid-dinner debut. As a child, my only concern was not that I had stopped the party in its tracks but that my mother wouldn’t let me have the brownies she had displayed for dessert.

I reunited with lasagna in my 20s—thank you, Avelluto’s Italian Delight!—and was healed via my romance with ricotta.

Bonus 5th Question: What’s a commercial jingle you cannot (and will not) ever get out of your head?

Rent-free—the PSA for overhead power lines that ran every day throughout my childhood. It involved Billy Smith (who, as the chyron so aptly labeled him, was an “Expert Tree Climber”) jumping in and out of trees while telling all of us how overhead lines could kill him—and us, really.

I can recite the entire PSA and have actually thought about using it as my dramatic audition monologue. It would be humorous only to me to see the confused looks of those behind the casting table but might be worth it. I don’t know. I’m still undecided.

OK. Here goes—with the original emphasis of the commercial actor: ”I’ve been climbing trees all my life. But not trees near overhead lines. ‘Cuz if you touch a line, or your weight makes a branch touch a line, that electricity can hurt. It may even kill you. And climbing utility poles is really dumb. And remember, always look up before climbing, and please stay out of trees near overhead lines.”

You’re welcome. Cast me in all the things.