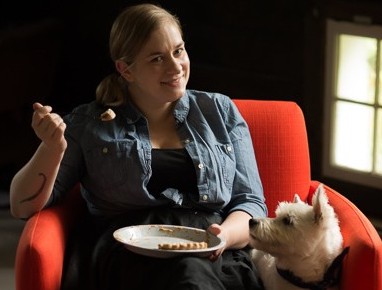 Erin Jeanne McDowell is a ubiquitous renaissance woman. The Lawrence native is a New York Times best-selling cookbook author, recipe developer, and food stylist. McDowell—who also hosts the award-winning series Bake it Up a Notch for Food52—recently moved back to KC after spending 17 years in New York City.

It’s a definite homecoming, she adds—emphasis on “home.”

Now that she’s back in the metro, we caught up with the food diva (and social media maven) to ask her four inane questions. (And, shockingly, none of them had anything to do with her new book, the aptly named The Book on Pie.)

Erin Jeanne McDowell: An online ad I was getting for a while for one of those at-home food sensitivity tests still haunts me. It was just a person sitting at a table, asking the camera, “Why would I want to…” and then listing a ton of terrible, inconvenient problems.

Then, they got the at-home test, and they just said, “Yea, I’m gonna do this instead.” It was so anti-climactic, not to mention riddled with a few grammatically incorrect sentences.

What’s one movie that—regardless of what you’re doing—you must stop and watch ’til the end?

Ferris Bueller’s Day Off. I feel like it’s always a sign that I should take a day off, so I always start by finishing the movie first.

This is so much more complex than you’ll probably give me space to sufficiently answer. But one thing I’ll say—if you’ve had any spices in your spice cabinet for longer than one year, it’s time to refresh them. They lose freshness and potency so much faster than most folks at home realize.

If you had the ability to ban a spice or fragrance, what would it be?

The only smell I would want to ban is the smell of really good food on an airplane when I haven’t eaten yet. One time I had a ton of terrible delays and barely made my connecting flight. Then I sat down next to the most heavenly-smelling cheeseburger someone had brought on board. Now that should be illegal.