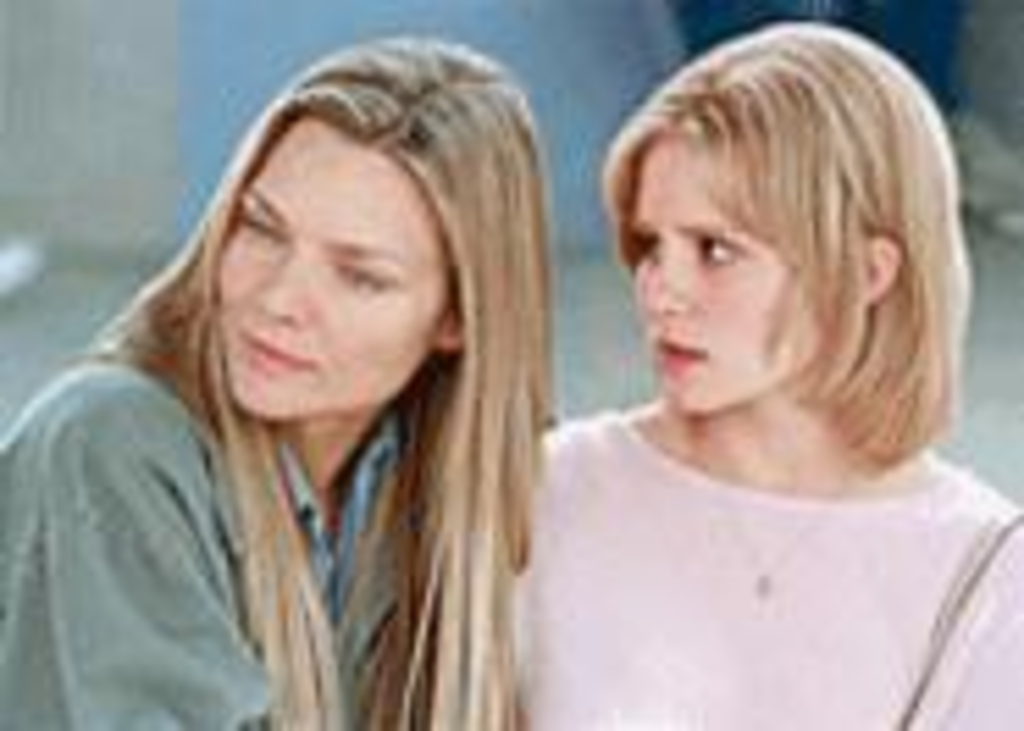 Good Lord, there hasn’t been this much blond hair onscreen since the Von Trapp children sang and danced their way across the Alps in The Sound of Music. The fact that these latest golden locks belong to the likes of Michelle Pfeiffer, Robin Wright Penn and Renée Zellweger suggests that this, too, is going to be one big ol’ Hollywood picture. And it is.

White Oleander is the latest in a string of studio femme films that tries to elevate what is essentially melodramatic, B-movie material to A-level status through a veneer of gravitas and a cast of gorgeous, top-dollar stars — with all this radiant flaxen hair on display, the movie sometimes seems like a Clairol ad. But no matter how low-key the direction or unsentimental the performances — and White Oleander scores points on both counts — there is no escaping the semitrashy but oh-so-life-affirming ring of the plotline.

Based on the best-selling novel (and “Oprah’s Book Club” selection) by Janet Fitch, the film stars relative newcomer Alison Lohman (TV’s Pasadena) as fifteen-year-old Astrid, a shy, sensitive girl who lives with her strong-willed and unpredictable mother, Ingrid (Pfeiffer). Beautiful, seductive, impulsive, judgmental and cruel, Ingrid is a classic narcissist. Astrid is in awe of her, but she also recognizes her mother’s volatile nature and caters to it rather than incur her wrath. Astrid has acquired her mother’s considerable artistic talent but not her domineering, self-absorbed personality.

When Ingrid murders her unfaithful lover in a fit of passion and is sentenced to prison, Astrid is shipped off to a succession of foster homes. Her first foster mother (Wright Penn) is a Spandex-clad former stripper turned born-again Christian; the second (Zellweger) is a sweet but fragile actress with a crumbling marriage; the third (Svetlana Efremova) is a savvy Russian émigré with a virulent capitalist streak. Astrid, who has never really forged her own identity, tries desperately to fit in at each new foster home, but her efforts are complicated not only by destructive conditions at each home but also by Ingrid’s still powerful — and often corrosive — influence over her daughter.

Pfeiffer connects with her role, conveying an ice-cold hardness that truly seems born of the hottest passion. Her performance here more than makes up for her abysmal appearance opposite Wright Penn’s real-life hubby, Sean Penn, in last year’s sickening I Am Sam. She had a five-minute, close-up crying jag in that film during which not one tear moistened her eye — not even an artificial one. In White Oleander, her anguish feels painfully real and the tears erupt from deep inside.

At heart, White Oleander (named for a bush whose flowers are both beautiful and poisonous) is about a mother-daughter relationship and an adolescent girl’s attempts to become her own person, but the story’s soap-opera qualities keep getting in the way of any genuine emotional involvement. British director Peter Kosminsky, known on the other side of the Atlantic for his award-winning documentaries and television dramas, makes his American feature debut here and does his best to rein in the romance-novel aspects of the story. That the film works at all is testament to his restrained direction and his ability to make an episodic script feel whole. (Credit for that goes also to screenwriter Mary Agnes Donoghue, best known for Beaches.)

By a strange coincidence, White Oleander opens on the heels of newspaper reports that nearly 500 foster children have disappeared from Los Angeles county’s troubled child-welfare system. Alas, the film isn’t meant to be a critical examination of family and children’s services; the entire foster-care development is a mere plot device around which to wrap a high-concept story. This isn’t a message movie; it’s a chick flick, plain and simple, with no higher or more noble aspiration.