For the economy of St. Joseph, Chiefs training camp has not been an impact player

In 2009, the state of Missouri enticed the Kansas City Chiefs to move its training camp from a college campus in Wisconsin to Missouri Western State University in St. Joseph.

To secure the deal, the state provided the Chiefs with $25 million in tax credits. At the time it was announced, Gov. Jay Nixon said the agreement would create jobs and boost the region’s economy. But now, in its seventh year, the team’s training camp does not appear to be racking up touchdowns for the people of St. Joe.

“We get maybe a person a day, if that,” says Stephanie McGarry, owner of Crumbly Burger, a hamburger restaurant.

“We see a slight increase, maybe,” says the manager of one St. Joseph hotel, who asked not to be identified.

The hotel numbers do not look any better. Data provided by the City of St. Joseph, which charges a 3 percent hotel tax, show that room rentals for the third quarter of the year (July, August and September) have, on average, been lower since the Chiefs came to town.

We have been told a different story. Last year, when the Chiefs signed a three-year contract extension with Missouri Western, The Kansas City Star, the Associated Press and other media outlets quoted an estimate from the St. Joseph Convention and Visitors Bureau that the training camp made an economic impact estimated at $6.3 million.

This turns out be a miscalculation.

The convention bureau arrived at the $6.3 million economic-impact estimate by multiplying 40,000 (the number of fans who attended training camp, according to Missouri Western) by $158. The dollar figure was the average amount of money that surveyed visitors said they’d spent.

That, anyway, is how the convention bureau understood the math. But H2R officials, when asked about the visitor profile, told The Pitch that the average spending was per party, not per person. 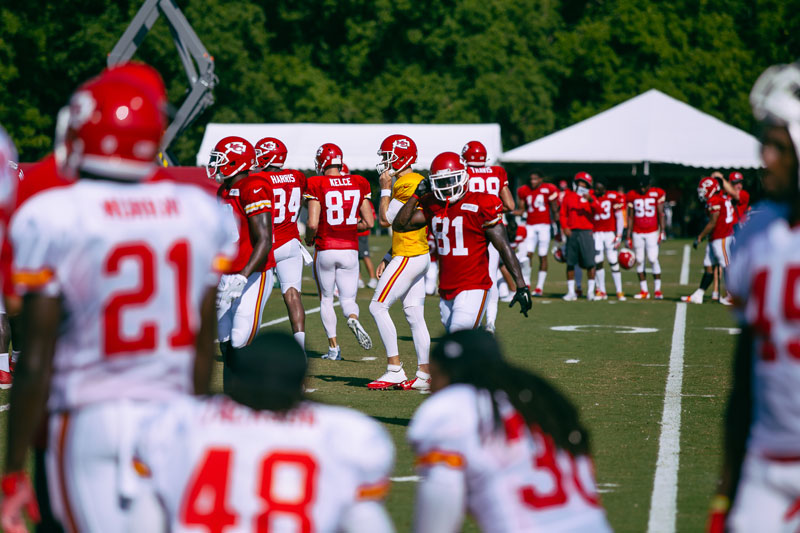 The St. Joseph Convention and Visitors Bureau acknowledged the error and sent The Pitch “updated” visitor profiles reducing the estimated economic impact in 2014 to $2.6 million.

This number, too, should be met with skepticism. In 2010, an economist at Missouri Western came up with a lower estimate that assumed a larger number of camp visitors.

It’s not a trivial mistake. Policymakers considered the convention bureau’s miscalculated economic impact when they approved $300,000 in additional tax credits for Chiefs training camp in 2015.

Last year, the Missouri Development Finance Board considered a request from Missouri Western to award $300,000 in tax credits to reduce the costs of replacing practice fields the Chiefs use during training camp. According to minutes from a February 17, 2005, meeting, Robert Vartabedian, the president of Missouri Western, cited the convention bureau’s $6.3 million figure when a member of the finance board questioned the value of Chiefs training camp to the economy of St. Joe.

While the economic impact of Chiefs training camp is not what’s been publicized, it’s not zero, either.

Gary Chilcote, museum director at Patee House, a landmark building in downtown St. Joseph that was once a headquarters of the Pony Express, says attendance seemed to increase the first weekend of this summer’s training camp. Then it rained. “We haven’t noticed a great deal of business so far, except for last weekend,” he says.

On the first Friday of training camp, a thunderstorm rolled through St. Joseph 30 minutes before the Chiefs’ 8:15 a.m. practice. The coaches moved practice into the taxpayer-subsidized indoor facility, which is off-limits to spectators. For fans, the day was a total loss.

Some of them had traveled some distance to watch practice and mingle with the players. As the rain fell, one group pulled into the parking lot having left Sioux City, Iowa, at 5 a.m. Two friends from Omaha got out of their truck, put on red ponchos and gazed at the empty field. As they returned to their vehicle, a woman in an SUV asked what was happening. “Are they selling T-­shirts somewhere? Let’s get to the important stuff,” she said and then laughed.

The crowd did not look poised to spend much money in and around St. Joe. Storm or no storm, the group from Sioux City was not
planning to spend the night, nor were the guys from Omaha.

Craig Gish is a Chiefs fan who lives near Worlds of Fun. This was his second trip to St. Joseph in the seven years the Chiefs have trained at Missouri Western. Gish had hoped get a few autographs and check out the team-run merchandise tent set up next to the practice field. He planned to eat lunch at a McDonald’s a mile from the university entrance.

Missouri Western is close to Interstate 29, making it a quick trip for Chiefs fans who live in the Kansas City area. Of course, a place that’s easy to reach is easy to leave, too. Gish was asked how he planned to spend the morning after practice had moved indoors.