Folk Alliance International steamrolled through another night of music on Friday 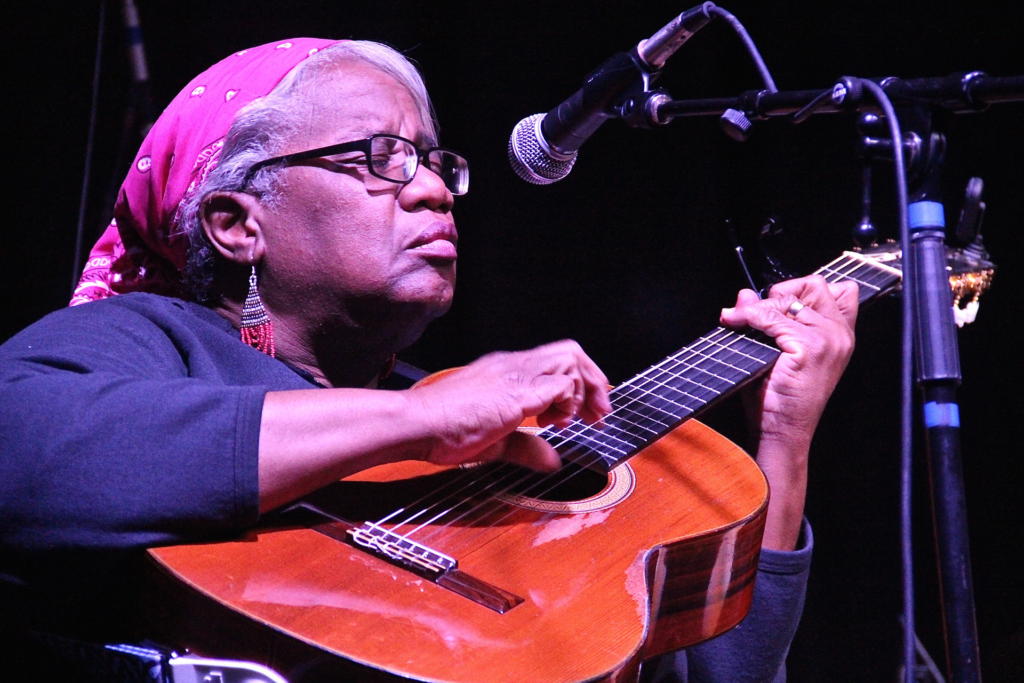 With the Folk Alliance International Conference and Music Fair spread over two hotels, with hundreds of musicians with seemingly thousands of guitars, a visitor can have any one of a myriad of experiences in one night. Last night, music poured out of nearly every room of the Westin, and as the conference this year has expanded into the Sheraton, banjos, guitars and voices rang throughout its lobby and meeting spaces there as well.

If you want to keep from being overwhelmed at all of this, you have to resign yourself to the fact that it is impossible to even see a tenth of what is offered. The level of quality leaves an impression: These musicians are earnest, the absolute real deal. It’s wonderful, and Kansas City is truly fortunate to host this event for at least the next three years. 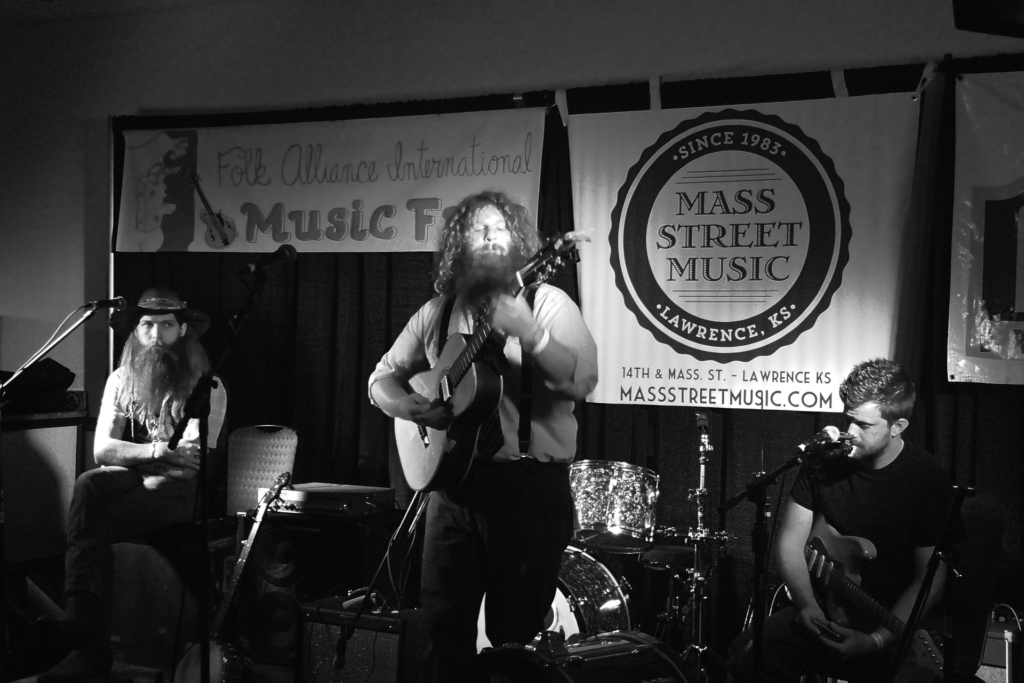 Whomever had the idea to set up Lawrence’s Tyler Gregory, Nicholas St. James and Brody Buster together for a round-robin performance deserves a gold star, as well for the clearly marked directions emblazoned throughout both hotels on how to get there. We had parked in the labyrinthine Westin/Crown Center parking garage somewhere in an orange-coded wasteland. After that disorientation, it was almost a relief to see the rather large “LFK” with an arrow signs made of blue tape directing us through the Link to the Lawrence showcase at the Sheraton. Bonus: We were informed that there was Free State Beer under one of the tables (truly a perfect welcome to the evening). 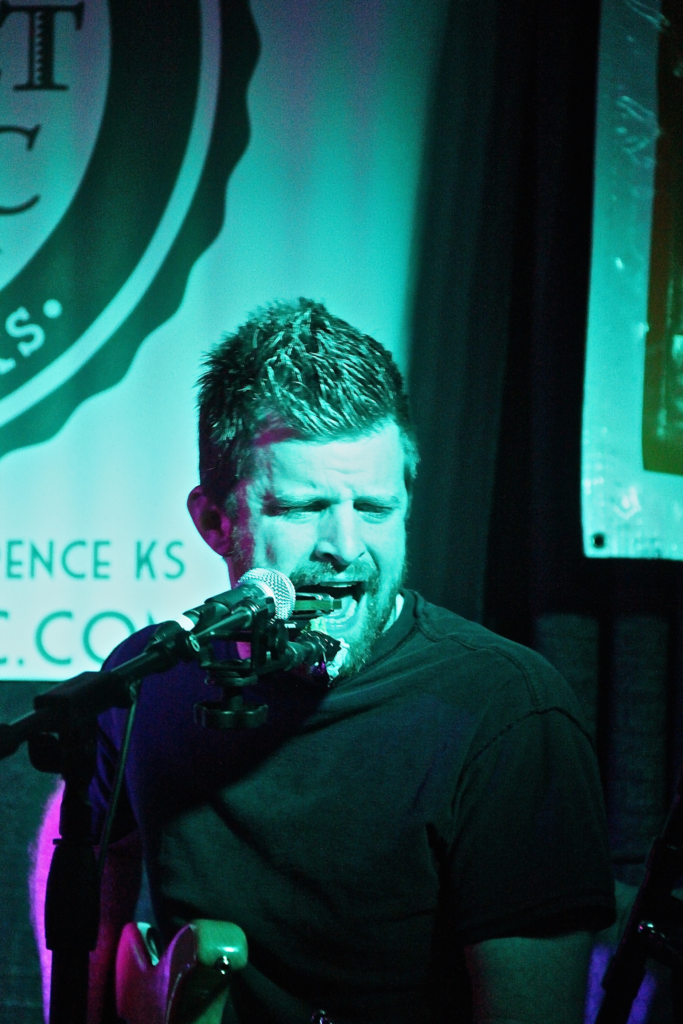 The format of the performance as well was a welcome refresher. Each artist took a turn with his song before moving it on to the other, trading jokes and love between songs (a few musician to musician marriage proposals were merrily offered). St. James pulls a lot of varied sounds out of his guitar, using effects pedals and reverb, while warbles, shrieks and growls come out of his throat. Brody Buster is a harmonica master who rounds it out with a bass drum and a powerful presence. And of course, there is the busker, Gregory, whose bassy, gravelly voice is a perfect medium for his stories about love and traveling. 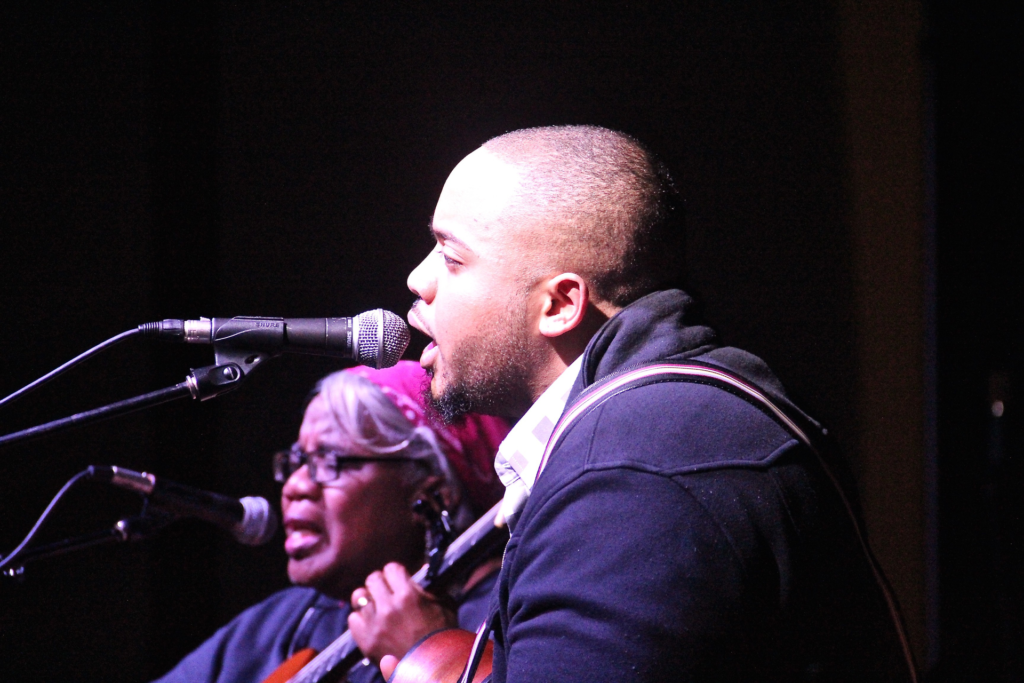 Over in a large ballroom in the Westin, Madisen Ward & the Mama Bear – fresh off of their Letterman appearance last week – thanked the audience for coming and reminded us that they should at last have an album released by May 2015. “Finally,” said Ward with a smile.

The pair’s humble, heartfelt way has clearly won them a few fans in the last six-plus months as the attention on them has increased, and their delivery is only getting more and more polished as they work. Ward is charming, his expressive face and tricks warbles multiplying his appeal. As I write this, a dozen hours later, “Silent Movies” is still stuck in my head on repeat. 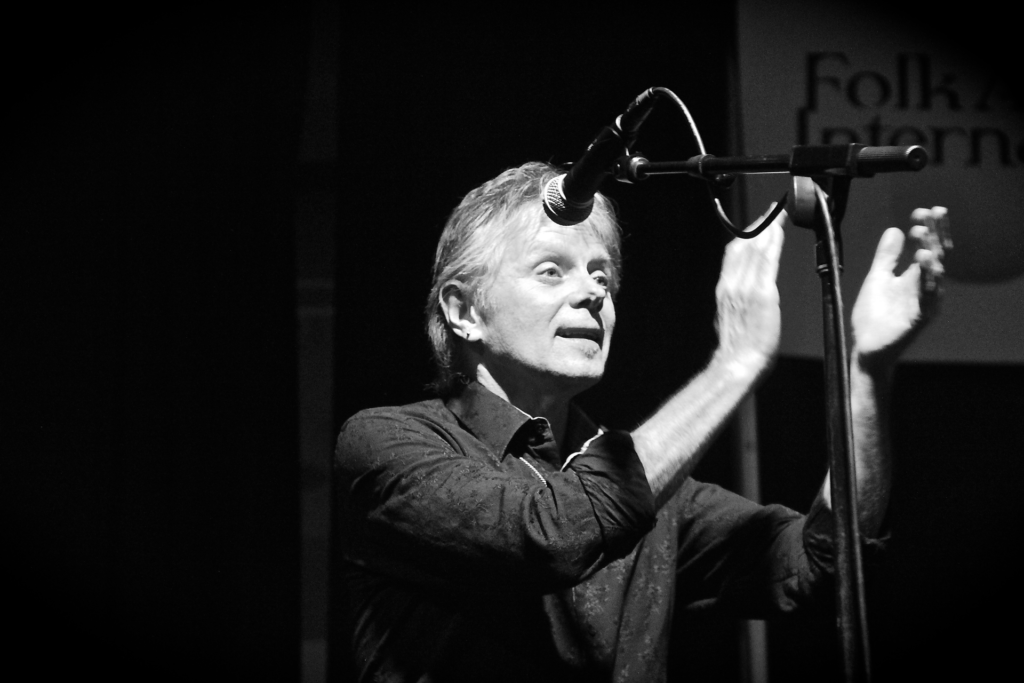 Next door provided an entirely different experience with a performance by Rant Maggie Rant, a Canadian “Celtic World Beat” (genre whoa) act which reminded me of that line in the Blues Brothers when the lady from Bob’s Country Bunker explains that they play “country and western.”

Rant Maggie Rant plays music from seven Celtic traditions: those of Ireland, Scotland, Wales, the Isle of Man, Brittany and Galicia. I admit my Celtic palate may be fairly unsophisticated – I don’t think I an confidently discern between Irish and Scottish Celtic music – but it was entirely pleasurable to at least try. The band played to a packed house, as the performers clapped and danced. Fiddle, pipe, rolling bass rounded out the sound. 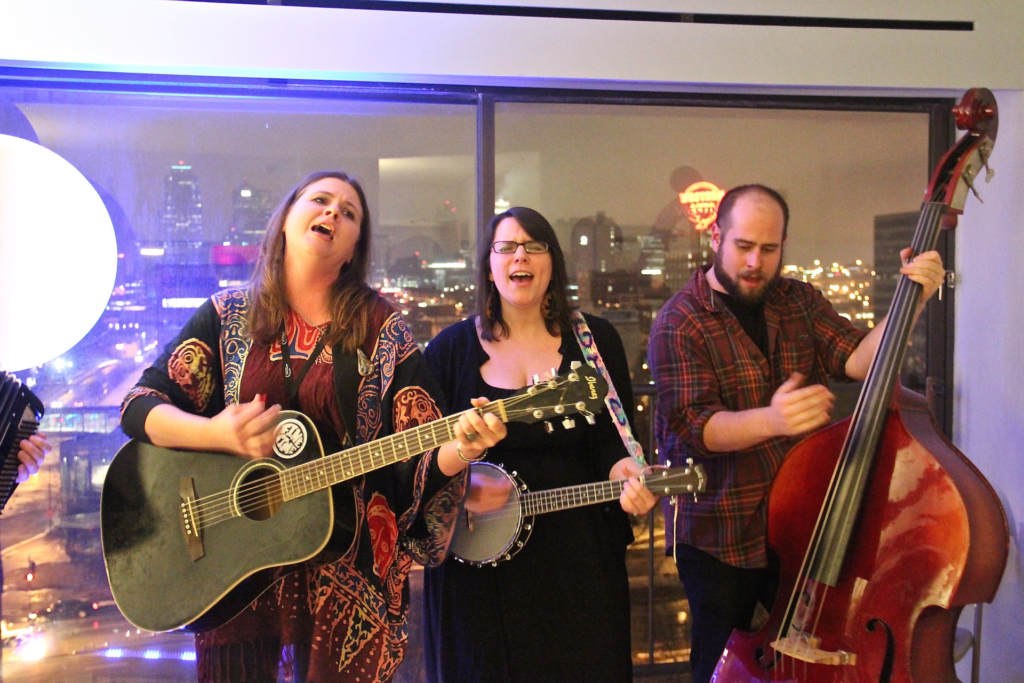 As the evening wore on, the shows moved up to “private” showcases upstairs (anyone with a badge can attend these) and the real parties began. Winfield Bluegrass Festival favorites Good Time Charley, in the vein of the Kansas City Bear Fighters’ sense of humor, got its room laughing as Melissa Butler and Barb Corley sang about Octopus Testicles and face transplants. 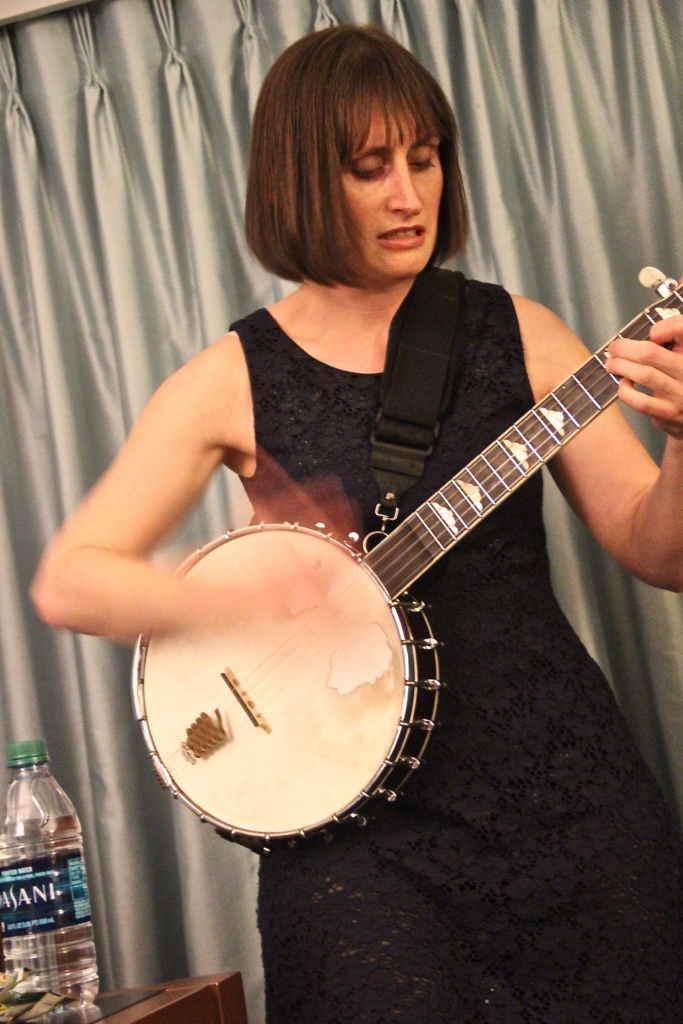 It was impossible to resist also briefly checking out one of my favorite acts from last year’s FAI Conference, Harpeth Rising. The trio features lush vocal harmonies and impeccable work on banjo, cello and violin. These women are reliably, seriously impressive year after year, and not to be missed if the opportunity arises. 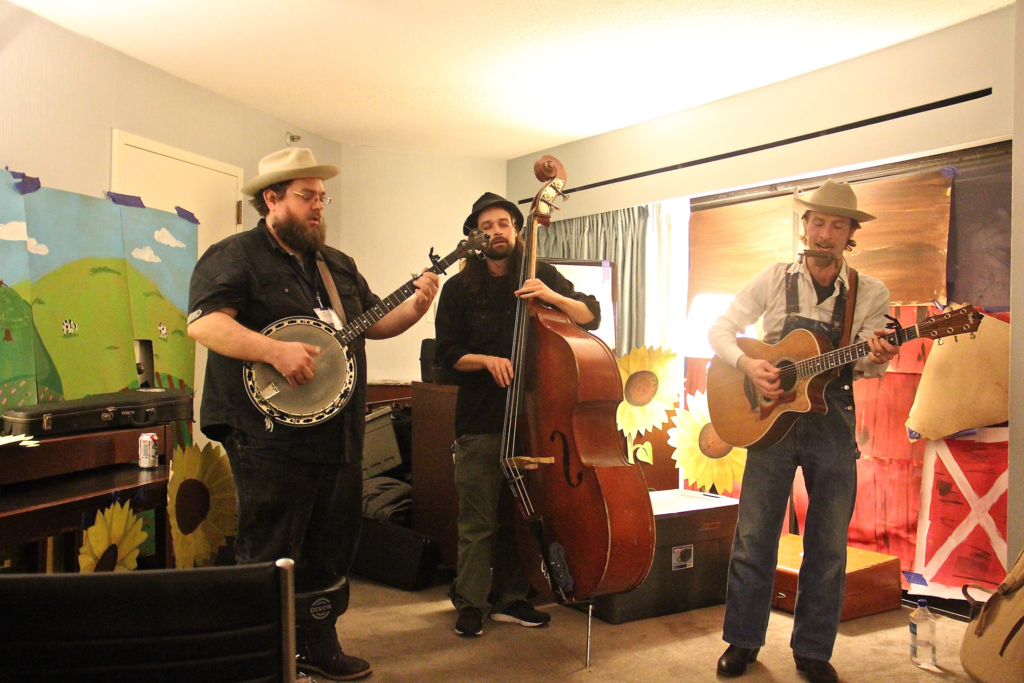 Two floors down, the Howlin’ Brothers, based out of Nashville, thrilled a small crowd in a suite, as onlookers relaxed on from the hotel beds (in most cases, the mattresses are moved out of these rooms – where they go and how the hotel negotiates this and the posters plastered on the walls throughout the hotel remains a mystery to me). This was the highlight of the entire evening for me. The band plays fairly straightforward bluegrass and roots music, but they do so impeccably. 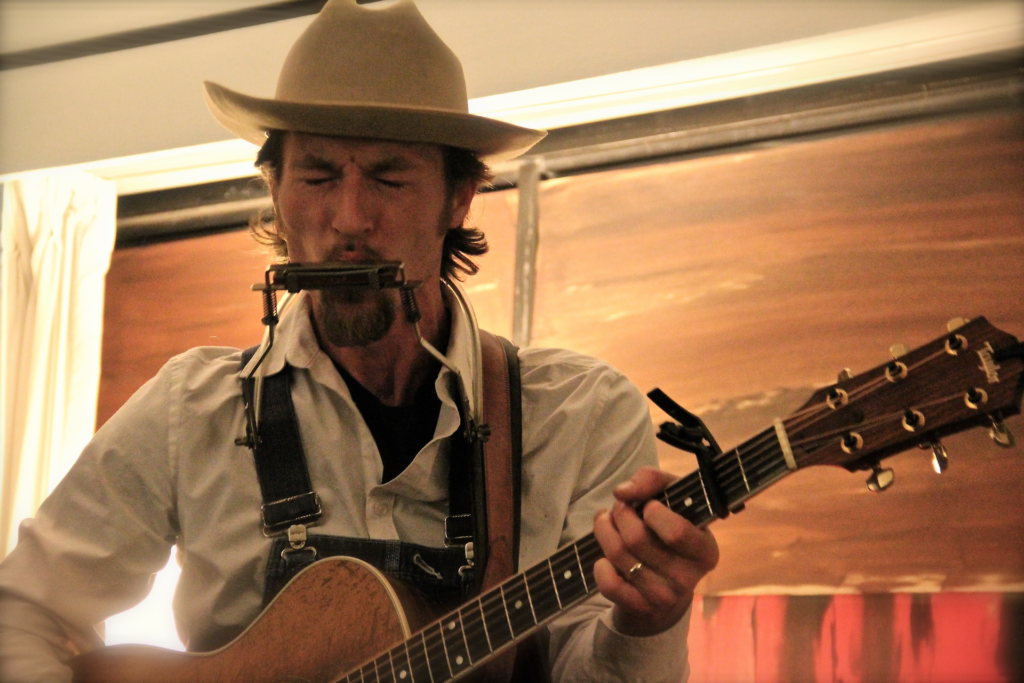 The vocals of Ian Craft (banjo) in particular are steeped in lovely sadness, and the coordination of the three members as they play their instruments with furious speed is a pleasure to watch. It prompted me to check out their latest release, Howl, which was produced by Brendon Benson from the Raconteurs. Side note: They are playing in Lawrence at the Bottleneck tonight, on Saturday, February 21, and if you’re not tearing it up at FAI this evening, you should definitely get yourself to that show. 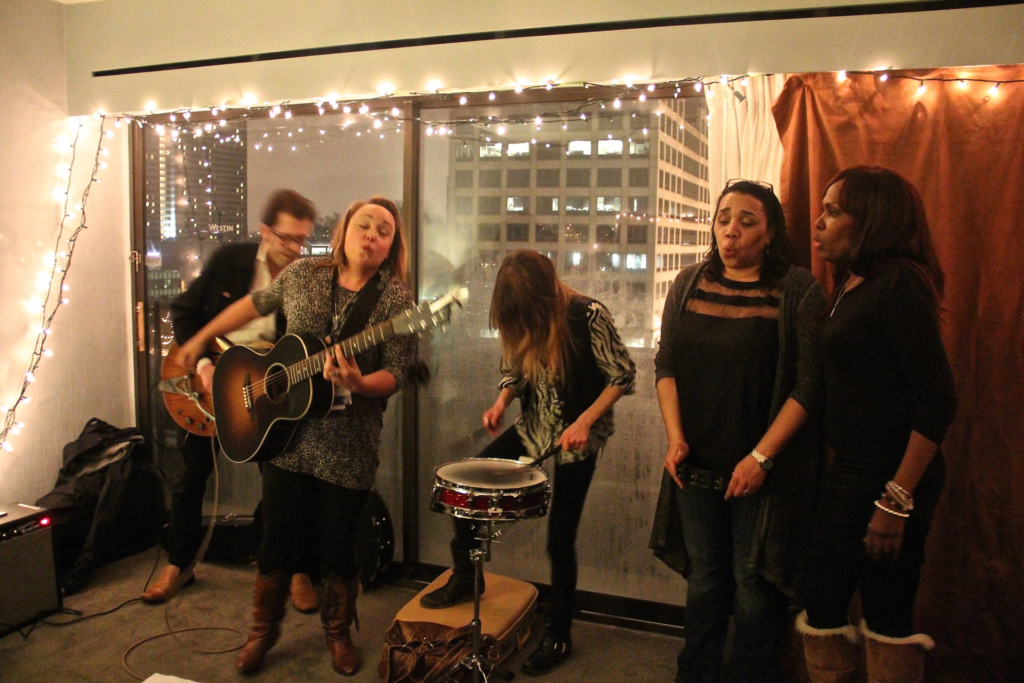 Before heading back into the freezing rain, we stopped in to watch Samantha Martin and Delta Sugar for a soulful, vocal powerhouse performance. Martin’s voice is reminiscent of Mavis Staples with its low register and gospel influences, and the pairing with co-vocalists (as Martin called them, rather than backup singers) generated enough heart-stinging, beautiful volume to fill up a church. This performance prompted another album search. Send the Nightengale was released this spring and features those incredible triple-part harmonies that we heard last night; go get it.


It felt like a shame to even leave at 1:30 a.m., as the private showcases were scheduled to run for at least a few more hours. For those who can’t quite get enough, there is one last ahead before FAI closes out for 2015. Tomorrow night is your last opportunity to take part in this marvelous event until next year. Don’t make yourself wait that long.