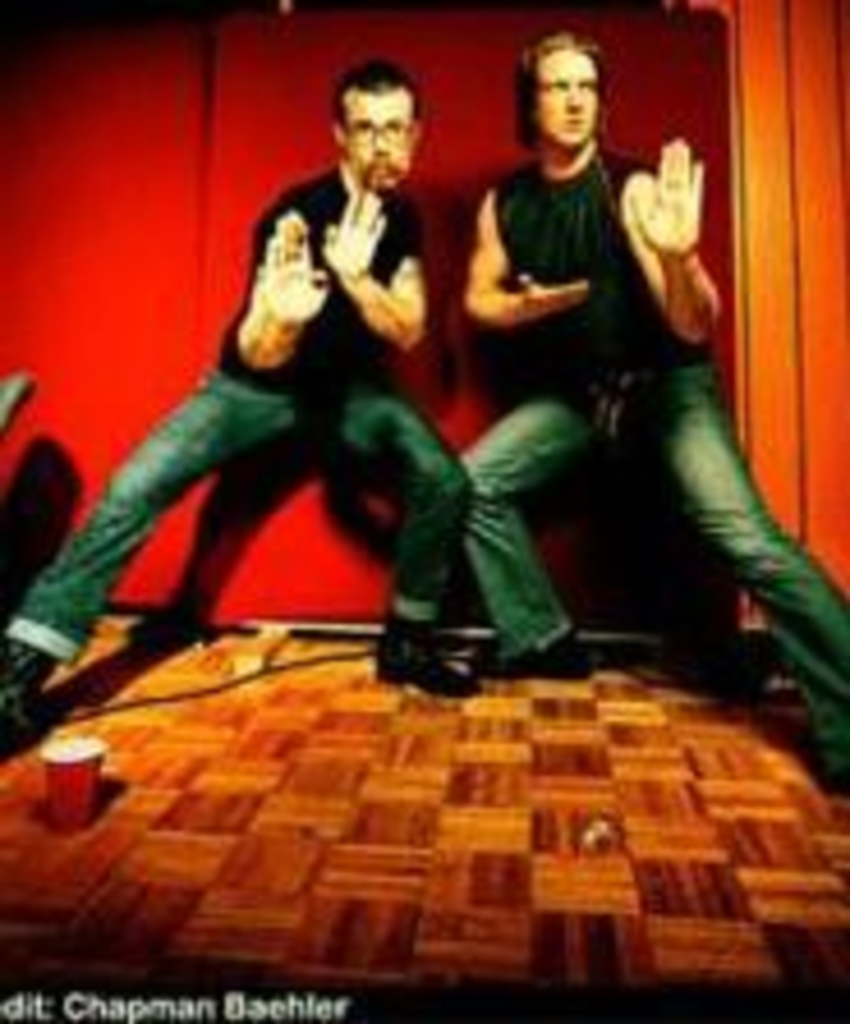 When Eagles of Death Metal came to town with the Strokes in April, mistaking them for a headlining act was all too easy. A raucous Uptown Theater audience raised devil horns and beers alike for the band’s sleazy, sexed-up tunes; think the Rolling Stones having a forbidden tryst with glam rockers and Foreigner. Frontman Jesse Hughes (whose porn-star moustache, aviator shades and tight shirts bring out a resemblance to the Village People’s cop) leered about “ladies” and tossed off a suitable number of f-bombs while rattling off caveman-heavy riffs.

Reached in New York City, Hughes and the rest of the Eagles — sans drummer and band co-founder Josh Homme (of Queens of the Stone Age fame), who isn’t on this tour — are en route to their hotel the night before an appearance on Late Show With David Letterman. But the facial-hair-laden frontman still took the time to discuss the genesis behind the band’s new CD, Death By Sexy, and be an alluring phone conversationalist.

Jesse Hughes: How you doin’, baby?

You sound pretty good, can I just say that right now?

Thank you very much, I’ve been told that before.

People are into this record.

Oh, thank you. We had a lot of fun recording it, it was the best album I’ve ever been a part of so far.

What made it the best?

I got to get a little sexier on it. And so far, it seems like girls really like dancing to it, and that’s really why I did it.

That’s the best rock and roll music, when you get people to shake their asses.

That’s the whole point. When you get a big boy party — I’m not putting anyone down — but if it’s like Limp Bizkit or Syndrome of a Down or whatever they’re called, it’s a big boy party, and it’s a bunch of sweaty dudes. But if you really focus just on girls, let them smile and have a good time and remind them how beautiful and wonderful you think they are, then boys are happy and everyone’s having a good time.

People are really getting what you guys are doing. I think on the first record, people were almost like, “Oh, ironic rock, like the Darkness.”

You recorded the record in 12 days.

That was a wild recording process. I don’t think I slept the entire 12 days. That’s no joke. It was a lot of little rock and roll beauties and sweet baby girls and sugar bears running in and out of the studio. There was a lot of that kind of action taking place. We had a lot of great moments of, I don’t know, studio magic … hey, I’m going into a tunnel now, baby, so don’t go anywhere, girl. You can still hear me?

Yup, I can hear you.

We had these great moments of inspiration where … we were mostly an ingredient, along with drugs and everything else in making this album. It’s hard to pinpoint something I could tell you without being arrested. [Hughes addresses bandmates in background. ] What do you guys think was the greatest part about recording the album? [Voices are heard. ] Yeah, the couch was great. Just being in Sound City, which is where they recorded Fleetwood Mac’s Rumours. Also I set up my vocal booth exactly where Rick Springfield recorded “Jessie’s Girl,” so I was trying to capture some of that magic.

[Connection is lost, and Hughes has to call back. ]

It’s all good. You out of the tunnel?

Yes, baby, we’re out of the tunnel. I gotta tell you, I’m actually a little nervous because you sound really hot and you have such a great speaking voice, it keeps throwing me off. [Laughs]

I just want you to be my phone girl. [Laughs] Please, baby, let’s just go out on the phone.

Speaking of that, is your album cover an homage to Loverboy?

Wow, that’s really funny you should say that. That’s specifically what inspired it, that and [the Rolling Stones’] Sticky Fingers and [Motley Crue’s] Too Fast for Love. The Loverboy is the pose. I came up with that idea. It was like, what was Loverboy fucking doing, anyway? Who are they advertising to, a dude in pink hot pants? Give me a fucking break.

Did you always know you wanted to be in a band?

It’s weird, I always had a feeling, I always had a sensation. But my passion was always in politics. I was obsessed with music as a child. My first concert was Kiss. My daddy was a rock and roller. I loved the Rolling Stones from the time I was a little boy. T. Rex. I loved Fleetwood Mac.

Politics was my passion. I graduated from Clemson University with a degree in journalism. I worked for Gannett news service, I worked for the Associated Press. I finally ended up back home working for our hometown paper, The Desert Sun [in Palm Springs, California], doing some political work for Sonny Bono and his wife Mary. I got married, had a kid, yadda yadda. Then I got divorced, and it was a very horrific, horrible, life-changing divorce. I lost, like, 60 pounds. My friend Josh showed up and said, “Hey, you want to make a record?” So I wrote the first record in like a week.

I was 30 years old. I had nothing to lose. It was like rock and roll called me. I woke up, and I had this amazing moustache overnight, a pair of leather gloves, a cape and black leather boots. And I don’t even really, honey, know where they came from.

People do sleep-walking and sleep-driving. Maybe you did sleep-shopping.

What is the care of your moustache? It seems the focal point of your look.

It’s my Samson hair, baby. I don’t really know if you can characterize it as a moustache. I think technically it is a soft boomerang of love. I don’t wear one. I own it. Like Tom Selleck, Sam Elliott, baby.

That’s quite a moustache to aspire to.

Totally. I like to think of myself as an up-and-coming star in the adult industry.

I can see that, too. Well, you are infiltrating a different kind of TV with the TV commercials [for Wendy’s, Payless Shoes, etc.].

This really ain’t no Bible study. We didn’t come here to save whales. This is rock and roll. We came here to have a good time and hang out with ladies.