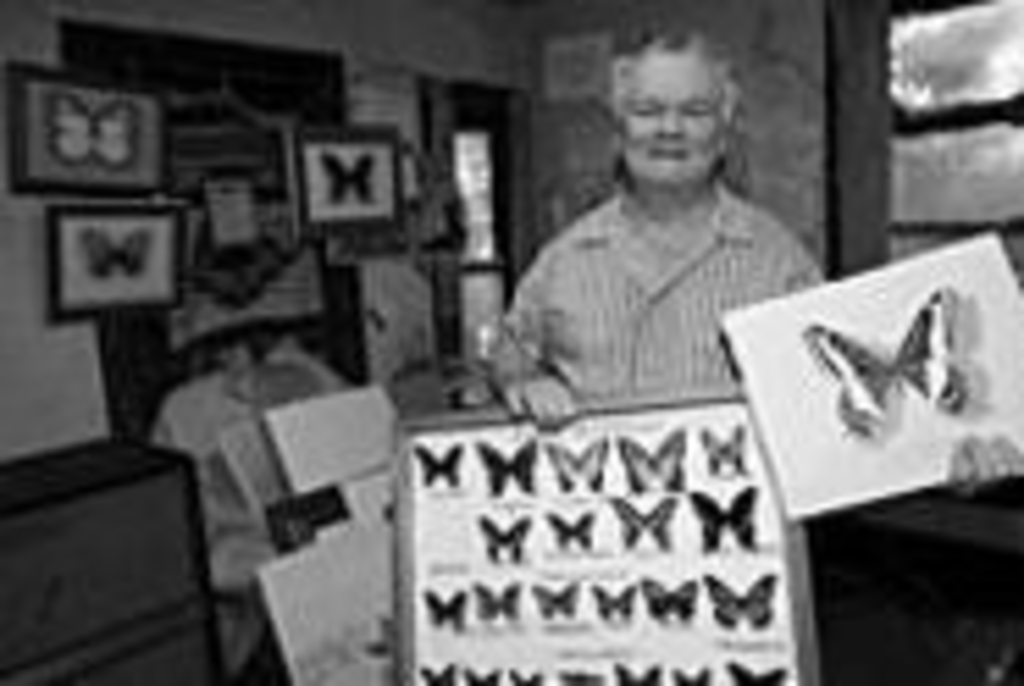 It’s hard to get lost in Ottawa, Kansas, where I’ve been a few times to visit a family friend. At Christmastime, the city hangs tinselly banners on either end of Main Street bidding visitors good tidings. As you drive under the first banner, the second is already in plain view.

So when Pitch photographer Luke Echterling and I traveled an hour from Kansas City to visit renowned butterfly artist William H. Howe, as he’s known to natural history museums and entomology departments nationwide (townspeople call him Bill), the fact that there were no signs marking our Mapquest streets didn’t stop us from finding him. We arrived at one end of town and determined that the street we wanted was the one without a sign. We traveled down gravel roads, past 1960s Fords. And I knew that the huge, rickety, white house set back from the street was Howe’s. “It’s a farmhouse,” he’d explained over the phone, in a voice with an unusual amount of vibrato for one who’s speaking and not singing. “You’ll use the back door.”

The back door was a wood frame with a plastic tarp stretched over it. We heard country music coming from within. When I cracked the door open, the smell of mildew was not airy like an odor but solid, like a heavy object that had been chucked at me. Luke and I agreed we must have opened the wrong door. This must be a storage area, not an entryway. The other door, however, was impossible to use — there was a ditch in front of it, the farmhouse equivalent of a moat. A shroud of cobwebs blocked our path anyway.

I called out as I entered. No reply. But I could hear rustling on the other side of the next door, so I approached that one and called out again. Behind this door was Howe in his underwear, making a sign that read “Butterfly art this way! Reporters and photographers welcome!” I was easily more shocked than he was. He politely and calmly asked us to wait outside while he put on some clothes. We obliged.

He emerged wearing denim shorts and a button-down shirt, looking decent indeed, and showed us his butterfly net. “Every painting starts with a butterfly,” he began. “And every butterfly must be caught.” After a butterfly is caught, it is stretched out on a board, held in place with tiny pins through its wings. If this process is carried out correctly, the butterfly will maintain its color and lifelike appearance forever, according to Howe.

Bill Howe is 76 years old. He painted his first butterfly when he was 11, and painting more of them is all he has wanted to do since. “I do this for one reason,” he explained. “It’s fun. And most jobs are not fun, I have found.”

His illustrations appear in at least three books on butterflies. (One of them, Our Butterflies and Moths, he wrote as well.) The Butterflies of North America, which he illustrated and helped write, is out of print and sells on Amazon.com for upwards of $200.

He took us into a room with a cot, a chair, a television and lots of brightly colored butterfly paintings. The room was brown, slate-blue and faded yellow, but the paintings were bright coral, turquoise, pink and leafy green. The butterflies looked photographic, but the backgrounds — flowers, thatched huts, ponds, weeds — were cartoonish, fuzzy, almost surreal. The colorful, photorealistic elements seemed like reality gleaned through binoculars, though butterflies dwarfed the houses. It was a vaguely psychedelic look, fantastic and mesmerizing.

These paintings hung beside pieces of cardboard covered in magic-marker scrawl tacked to Howe’s wall. Quotes from people such as Albert Einstein hung ceiling to floor, next to notes about the weather. “Hot in Oklahoma City — 120 degrees on Sunday, July 25, 1999.” The sign also noted that on the same day, it was 108 degrees in Kansas City, 110 in Ottawa. Less hot, but steamy nonetheless. At the end of the visit, he sent us home with presents: an autographed copy of Our Butterflies and Moths and a list of public institutions that house his work.

Yale professor Brian Skinner later told me, over the phone in a refined British accent, “a bit of a story.” About 15 years ago, the professor and his wife were staying at the same inn as Howe in Mexico, where Howe’s work has taken him more than eighty times. “He discovered that we were geologists,” Skinner recalls, “and we discovered that he was a butterfly guy.” Howe agreed to take the Yalies into the field with him for a day. Skinner’s wife found a large monarch, which Howe volunteered to paint for her. “It’s really a beautiful oil painting,” says Skinner, who framed the piece and now displays it prominently in his home. “He also sent us proofs for reference books he’d illustrated, and those we’ve also framed and mounted.” But Skinner is neither an entomologist nor a lepidopterist (formal lingo for butterfly guy), and he could not tell me Howe’s rank in the canon of butterfly painters.

“His artwork is based on having a series of specimens he could consult, so he could see how common certain spots were and give you really the most accurate image possible,” Quinn says. He also knows why people pay hundreds of dollars for The Butterflies of North America when other authors have penned similar volumes. “It’s the specific information he gives on rarities and stray species,” Quinn explains. “Other publications will just say a certain species was spotted in January, so, you know, you have to wonder, was it five Januaries in a row?”

When Howe arrives at the Butterfly Festival with his stretching board and easel, he’ll be a walking anachronism. Quinn reports that close-focus binoculars, digital cameras and collecting restrictions have rendered Howe’s brand of documentation obsolete. “Collecting will always be part of the study of insects and butterflies,” Quinn says. “But to collect and mount and label and properly spread a single butterfly the way Howe does, it takes 20 minutes … having that photo, you can post it to a Web site and send the specimen around the world instantly, and you can let it fly away.”

I look back through my copy of Our Butterflies and Moths. In it, Howe takes us on a collecting trip to the Sangre de Cristo Mountains of New Mexico. Following an impassioned description of all the butterflies we spot and catch, he chimes in with this:

What do you say we have lunch? Why don’t you run down to the car and get our lunches for us? … Back already? I’m hungry, too … Isn’t the fried chicken delicious?

After sharing some imaginary chicken and washing it down with an imaginary canteen of water, we run off to chase another Western Swallowtail. Our mentor is proud of us.

Though just yesterday you told me that you thought all butterfly collectors were crazy! Now look at you, sweaty, tired and bedraggled, but gratified — you’ve become one of us!