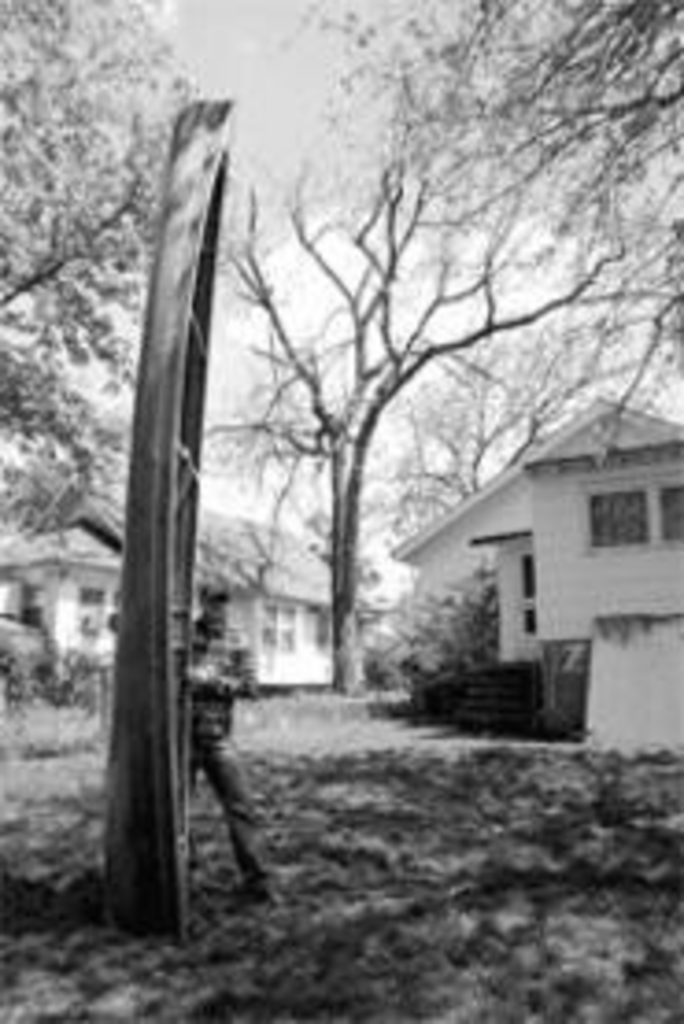 Call us crazy, but we’re pretty sure that if Survivor ever did a river series, one in which contestants were challenged to navigate a muddy Midwestern river using nothing but driftwood, Greg Ainsley would not be voted off the show.

Lots of people go camping, and canoeing has taken it a step further. He didn’t just pitch his own tent, catch his own fish and row his own boat. He built the damned boat, too.

A Midwestern transplant since attending the Kansas City Art Institute, Ainsley is a Floridian by birth. He comes from a place where there’s lots of water and the weather is right for enjoying it all year long.

“In the Midwest, it doesn’t seem too common for people to build their own boats, but Florida is such a water culture,” he says. “Everybody’s fishing and going out to the ocean.” Converting the garage of his midtown rental home into a canoe-crafting workshop seemed perfectly natural to him, much in the way that using a garage to work on rehabbing a beat-up old car or motorcycle would seem natural to most Midwesterners.

During his course of study in the Art Institute’s sculpture department, Ainsley was always focused on two things: minimalism and function. Building a canoe might not sound like a particularly artsy endeavor, but it fit the bill.

The design of a canoe is simple — the only boat with fewer bells and whistles than a canoe is a raft. For Ainsley, minimalism doesn’t mean canvases with basic geometric shapes on them. It means using no more than is necessary — as a human being.

“When I talk about minimalism, I’m not talking about it as an artist thing,” he says. “I mean more of a lifestyle. It’s a very minimal, very humbling experience to be in a canoe.” What’s humbling about being in a canoe? “Being on a swanny river, paddling along with alligators right beside you. There’s something humbling, too, about old men stopping you to talk about your boat and tell you their stories about building.”

To figure out how to build his boat, Ainsley consulted a book called Canoe Craft. “It’s a fairly easy guide if you understand building in general, working with wood,” he explains.

The canoe took almost a year to build, but the reason why it took that long was finances. There were little patches of time when Ainsley couldn’t work on it because he was saving money to buy a certain tool or a specific material. But it was easier to save for one tool or one material at a time than to cough it all up at once for a finished product, which ultimately costs a lot more. (According to Ainsley, a decent wood canoe costs between $2,000 and $5,000, whereas he spent about $1,500 making his, including tools he’ll reuse.)

Ainsley used cedarwood to keep away insects, and fiberglass and resin to waterproof and protect the canoe from scratches. And he occasionally enlisted the help of his girlfriend, because boat building isn’t always a one-person job.

“Being that it was 17 feet long, it was kind of awkward trying to move it around,” he says. “It’s definitely a two-person thing. In the history of boat-making, there are a lot of stories of relationships that came out of that.”

In case anyone is thinking of trying something like this at home, we asked Ainsley about the advantages and disadvantages of taking out on the water a canoe he made himself. “There’s huge satisfaction in knowing that this is your livelihood for a two- to three-day trek,” he says. “And when you go to a river that’s heavily canoed, it’s rewarding to have people recognize that you took the time to build it.”

“Every time you drag it across a rock, it’s really painful.”