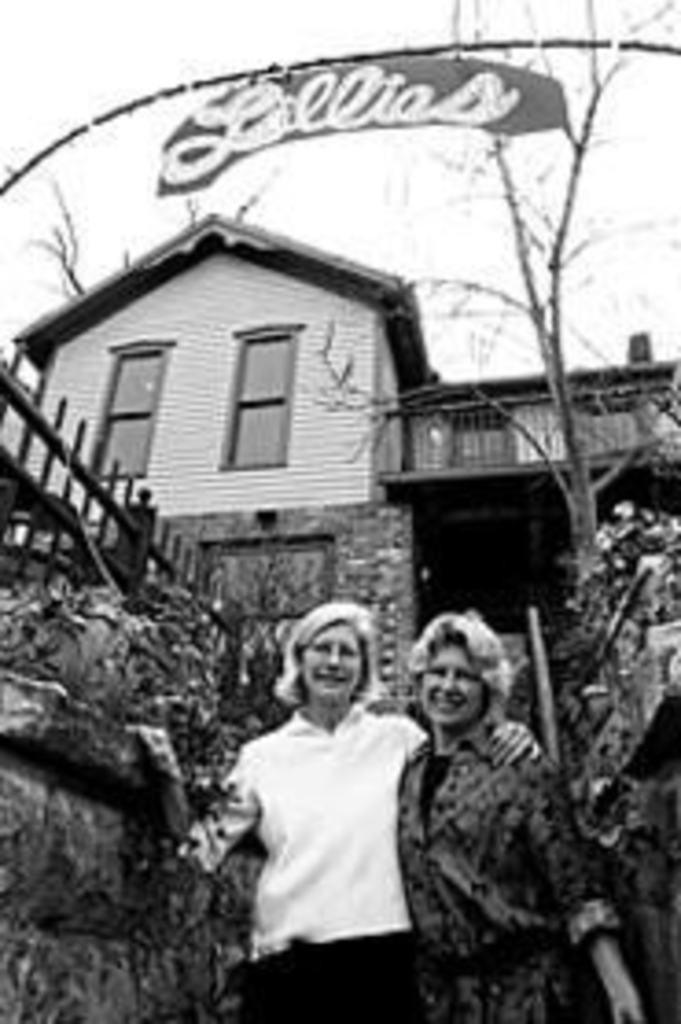 It’s hard to get Latrelle “Trelle” Osteen and Lynn Richardson — owners of the two-month-old Lillies on 17th — to speak planely. That is, to dish any dirt on nasty or bitchy celebrities they tended as TWA flight attendants. They much prefer talking about the nice ones, such as Natalie Wood or Bette Midler. Or telling how Liza Minnelli is terrified of flying — in planes, anyway. But Osteen turns stony at the mention of a certain red-haired comedy icon, a TV legend who was famous for often being as unlovable in real life as she was beloved on the tube.

“She was difficult,” Osteen says through a clenched smile. “And it was a long flight.”

There’s a dash of I Love Lucy in the slightly chaotic operation of Lillies. But that’s precisely what I found so appealing. Instead of some slickly packaged corporate concept, the unconventional Lillies On 17th is consistent only in its unabashed eccentricity. Hell, what other restaurant in this city can boast only eight indoor tables, mismatched antique china and a highly eclectic serving style — all while actually encouraging patrons to bring their dogs to its outdoor patio?

The building itself, a 19th-century Victorian home, is an architectural oddity. A previous occupant “jacked [the house] up off the ground in the 1970s and literally threw the first floor away,” says owner Adam Jones. “Then he put the original second floor on top of this kooky brick building made with a bunch of salvaged windows and doors.” When Jones bought it five years ago, he covered the interior ceilings and walls with salvaged wood dating from the 1850s.

The décor is as lovably haphazard as the restaurant’s hours and menus. Osteen and Richardson serve lunch three days a week, after-work tapas two evenings a week, dinner on two nights, and one brunch … on Saturday.

Although my snobbish friend Ned mostly liked his lunch there, he found the venue almost too offbeat. “It’s a throwback to Paris before World War II,” he said, noting that the bread could have been fresher and his salad required more dressing. “It wouldn’t have surprised me one bit if we had seen Alice B. Toklas cooking in the kitchen and Jean Cocteau smoking a Gitanes at the bar.” But you can’t smoke anywhere at Lillies — except on the patio, with the dogs.

After three meals in the tiny dining room, my own perceptions are somewhat different. For me, dining at Lillies is more like dropping in for supper at the home of two charming, nurturing and artistic aunts. The service is somewhat quixotic but exceptionally friendly and as personal and intimate as you’d expect in such a tiny dining room. For example, on one chilly Saturday night when I had dinner with friends Bob, Marilyn and John, we were immediately introduced to the quartet of diners sitting at the other occupied table.

“And this lovely lady,” Osteen said, pointing to a petite woman in a red suit, “is celebrating her 88th birthday.”

The tables are close enough that it would have felt rude not to acknowledge the birthday in some fashion. Still, I wasn’t about to sing to her — I have a phobia about singing to strangers, thanks to my years as a waiter, when it was often mandatory. We raised our water glasses in a toast instead.

“When you get to be my age,” the octogenarian announced, “if anyone asks you to do anything, you do it.”

Hear, hear, then! We were pretty festive ourselves that night. The little house, perched up on a bluff, looked charming all lit up at night — “Like someplace in San Francisco,” Marilyn said. Our spirits remained high during the salad course, which was visually beautiful as well as delicious, a jumble of greens, purple onion, hard-boiled eggs and red peppers splashed in a freshly made herb vinaigrette. Rustic bread, from the Fevere bakery around the corner, was accompanied by good olive oil and balsamic vinegar. Osteen clucked over her customers like a fussy aunt.

The $26 prix-fixe dinners were served in slightly staggered shifts, which wouldn’t have been too disturbing if Marilyn’s seafood “medley” — a word I’ve come to detest — hadn’t arrived lukewarm. The fragrant curried concoction of shrimp, squid and chicken (don’t ask) was whisked back to the kitchen and returned steaming hot — without the side dish of sautéed spinach and pine nuts.

Too bad, because the spinach was one of the best parts of the meal. I also enjoyed my hunk of swordfish, slathered with a spicy, peppery jelly. We all agreed that the tenderloin Bob and John ordered (there were only three menu choices that night) wasn’t the finest cut of beef we’d ever seen, though it was tender enough. “The coconut rice makes up for a lot,” Bob noted. He could overlook the beef, he whispered, because he liked Osteen and her place. “You want them to succeed,” he said.

The dinner potential is definitely there, despite the minor irritations. The owners are looking for an extra cook to help chef Melissa Fees in the kitchen; they’re adding dinner Wednesdays and Thursdays through December 31.

The lunches, meanwhile, have been mostly smooth rides. One afternoon when I ate there with several friends, Richardson insisted that I order a bowl of her fresh tomatilla-and-chorizo soup.

“It’s the perfect soup for a cold day,” she said. “We slice the tomatillas, sauté them with garlic and onion and cook them with mildly seasoned chorizo.” Richardson uses a slightly different recipe for her own paintings on the wall, which are more colorful than the soup but just as interesting. I didn’t have the nerve to ask if she also created the perky ceramic dog mask hanging on one wall, which only could have been considered art if it had a Gitanes in its mouth.

Cathy wondered if tomatillas were like tomatoes, but Ned explained that, though both are in the nightshade family, green tomatillas have a more citrusy taste and are also related to gooseberries. Not that this description did any justice in capturing the spicy, soothing essence of the hearty soup, which came topped with a big dollop of sour cream alongside wedges of soft flour tortillas. The oversized bowl might easily have made a complete meal, but several of us were eager to try other things on the Lillies lunch menu. Only the disciplined Cathy, who had spied a board announcing chocolate truffle pie for dessert, made the soup her main course.

The rest of us fired up our appetites and ordered full lunches: an open-faced sandwich of thinly sliced tuna heaped with salty, marinated kalamata olives and a creamy vinaigrette for me; a ham-and-Boursin-cheese creation for Bob; and an excellent salad of warm salmon sided with slices of tart green apples and dotted with capers for Carol. Afterward, three of us shared a couple of wedges of that silky truffle pie. (Bob wolfed down one of his own.)

Ultimately, I decided that Lillies On 17th is just as curiously marvelous as the weird little house that contains it. Besides, there’s always something to be said for taking the risk to be wildly unconventional in such predictable times. Osteen and Richardson may be grounded, but they’re quite daring in not saying, “Coffee, tea or mediocre.”