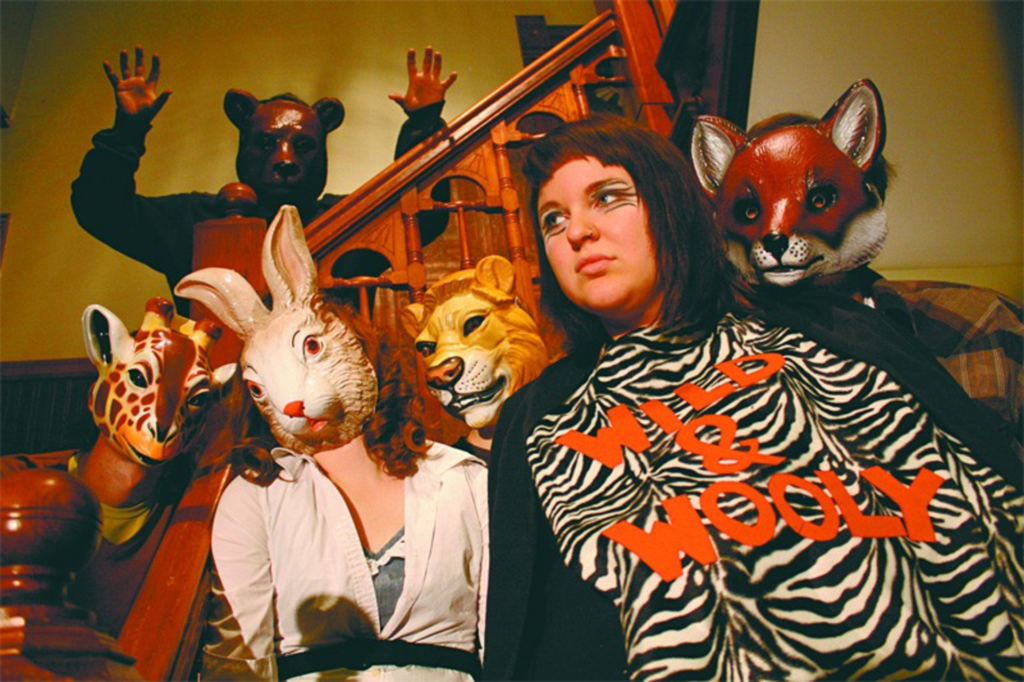 Here are five local acts — some young, some not, but all prodigiously talented — to watch in 2010.

Not just anyone can rocket to local hip-hop ubiquity simply by making a music video. But while other rappers exhausted themselves throughout 2009 playing show after show, Ron Ron taped up a homemade green screen, popped a camera onto a tripod, and portrayed several characterizations of himself in the video that he posted on YouTube for his single “Hey Honey.” By going viral, Ron Ron broadcast his way into the hearts of the bass-loving community and cemented himself as one to watch in 2010.

“The crowd I hang with is the same old crowd, so when people say, ‘I was at the barbershop, and they were talking about you,’ I don’t know how to gauge it,” Ron Ron said over the phone from Jacksonville, Florida, a few weeks ago. He had spent the previous evening tossing back Patrón at the Duval Diamond Awards, a ceremony for urban-music artists. (Friends of his were nominated but ultimately didn’t win.)

He has teamed up with 2009 Pitch Music Award winner Stik Figa for a collaborative album, produced by Greg Enemy, which he expects will hit the streets in early 2010. And then? He’s keeping the next chapter under wraps, maintaining the mystery that made his sudden appearance in ’09 so tantalizing in the first place.

One thing Ron Ron promises: If he goes through the music industry’s meat grinder, he’ll still recognize himself when he comes out the other end.

“I think I gotta really know who I am to survive through this,” he says.

Though if he does become someone else, he’ll have one more persona to play in his next video.
— By Nadia Pflaum

Diverse is a band with winning ways. In 2008, this five-piece jazz band of young musicians won the Gene Harris Jazz Competition. In doing so, trumpeter Hermon Mehari, tenor saxophonist William Sanders, keyboardist John Brewer, bassist Ben Leifer and drummer Ryan Lee not only got to open for the festival’s headliner, DownBeat Jazz Hall of Fame drummer Roy Haynes, but also won a deal to record an album of original music on the Origin label. The CD is called Diverse and was produced by Bobby Watson, who plays sax on a track.

Mehari, 22, says Diverse, whose sound blends modern-day influences with deeply rooted traditional jazz, did not expect the 2009 it has had: “At our CD-release party at the Blue Room in August, people had to wait an hour to get in. Our CD hit 49th on the JazzWeek chart, and it’s gotten international airplay in France, Australia, New Zealand,” he says.

One reason for the group’s success: “We like to provide a gateway to jazz,” Mehari says. “One of our goals is to bring in young people and expand our demographic by making the audience happy and feel good.”

Proof of that good feeling came in November when Diverse played the “We Always Swing” Jazz Series at Murry’s in Columbia. “That was our best gig of the year,” Mehari says. “We sold a lot of CDs, and a lot of people came up to us and said, ‘I don’t listen to jazz but I really like what you guys are doing.'”

As for 2010, the band will continue its Diverse Features Series, such as its recent RecordBar gig with guest Logan Richardson on alto sax, plus touring. “It’s good to have Kansas City as a base,” Mehari says. “There’s a lot of support here with other musicians and fans. And the city has a small-town feeling, so it’s easy to get the word out.”
— By Robert Folsom

Katlyn Conroy is diving into 2010 with a broken arm and a warm, fuzzy feeling about 2009. The 21-year-old singer and pianist won’t have to cancel any shows as a result of her recent slip on the ice, though, having added a seventh member to her group, the Wild and Wooly, to cover her left-hand parts.

In hindsight, Conroy’s debut solo album, I Think I’ll Stay Inside, was appropriately titled. She’ll be mostly housebound for the next four weeks, receiving aid from her songwriting partner and live-in boyfriend, Joshua Landau. Perhaps it’s for the best because Conroy and her crew are in the midst of a massive creative streak. Just a couple of months after finishing off her solo LP, Conroy has already written another album with the Wild and Wooly and also has returned to the studio to finish off the debut album from her other band, Another Holiday (which shares four members with the Wild and Wooly).

“It’s just very fulfilling, being so busy doing the thing you love,” Conroy says via e-mail. “Everything you do is one step closer to where you’ve always wanted to be.”

When she does pause for a moment to reflect on ’09, Conroy takes pride in the group’s first-place finish at the KJHK 90.7 Farmer’s Ball in November.

“The Farmer’s Ball win was something you could say was a resolution from my high-school years that came true,” she says.

Conroy also lent her expressive voice to records by friends Cowboy Indian Bear, Midnight Vinyl, Hospital Ships and Fourth of July. She took inspiration from groups such as Monsters of Folk and Why, in addition to old standbys such as Bright Eyes.

She’s setting her aim on an even more productive 2010.

“I’d love to get into SXSW this upcoming year, or maybe just play some festivals in general,” she writes. “It’d be great to be able to record new W&W songs and do a little touring. Once AH’s album is done, we plan on touring the East Coast for a few weeks. And like every musician asks for, some label attention wouldn’t hurt.”
— By Richard Gintowt

For most acts, a comeback spells mediocrity. But for the Kansas City metal lords in Coalesce, it means glory — or, at the very least, a shout-out on Fox News. Earlier this year, the band’s first album in 10 years wound up at third place on Decibel‘s Top 40 list. Then, during a spot on Fox News’ Red Eye program, critic Mark Prindle declared OX the album of the year.

“I know. How weird is that?” Coalesce frontman Sean Ingram says. “I was shocked that he gave us so much interest. It was much bigger for us than we expected.”

In fact, Coalesce wasn’t even sure whether OX‘s release would be heralded at all.

“In 2008, as we finished up writing and recording OX, we didn’t know our label situation,” Ingram says. “We thought we were going to put it on a torrent site and stay in the obscurity we had achieved over years of inactivity. Our goal wasn’t to make a comeback or get big in any way.”

Yet Coalesce did both. The band played metal and punk festivals all over the world, including the FEST in Gainesville, Florida, as well as HellFest in France and the Pressure Festival in Germany.

“When it was sorted out that Relapse was putting out the record, and we got our game plan together with them, we still didn’t expect much to happen,” Ingram says. “I doubt the response to OX would have been what it was without their extreme push. I’m sure a day will come when we just put our own stuff out online and call it a day, but as far as cementing what we did with OX in the minds of critics and fans, I really think Relapse was instrumental in that.”

With the exception of not visiting Japan, Coalesce’s only disappointment in 2009 was missing the chance to tour with Converge due to conflicts with the band members’ various day jobs.

“There is always hope for next year, though,” Ingram says. “The amount of glowing press results and getting to tour Europe for the first time ever — it was beyond anything we ever thought could happen with this band.”
— By Nick Spacek

If any musician in Kansas City is his or her own worst critic, it’s Ben Grimes of Soft Reeds.

“I feel like I could have done so much more, been so much braver,” Grimes says of his output in 2009. “A lot of the music that came out this year had very little sense of daring. It frustrates me to know that Kanye interrupting Taylor Swift is the most punk-rock thing that’s happened to this music industry in nearly a decade. It bothers me that I can’t hear the flaws, feel the noise or get a sense of authenticity from my rock stars anymore.”

Aww, cheer up, Ben — we heard three of your songs on a free EP you put out, and they were plenty brave!

Just putting out music is an audacious act for a guy who weathered the rise and fall of a major-label-subsidiary band (the Golden Republic, on Astralwerks). Plus, who questions the cajones of a dude who still plays the song (“Buildings and Mountains”) that his ex-mates (the Republic Tigers) made into a hit?

“The thing that I’ve loved the most about being back here has been just reconnecting with so many of my comrades in the Kansas City music scene,” says Grimes, who moved back to the area to be closer to his wife’s family after spending a year and a half in Nashville. “Once I felt ready to start work on this record, it was pretty obvious that this was the place for us.”

After playing shows here and there and recording in 2009, Grimes expects to perform more in 2010 to support Soft Reeds’ debut full-length, which promises lots of hooky, glam-tinged pop.

“We’ve been working on some deals that should get our albums out and get us on tour while circumventing the typical record-label route,” he says. “I think it’s going to be an exciting year for music. I hope that it gets bolder and freer and makes a statement again. And that goes for my own music.”
— By Richard Gintowt