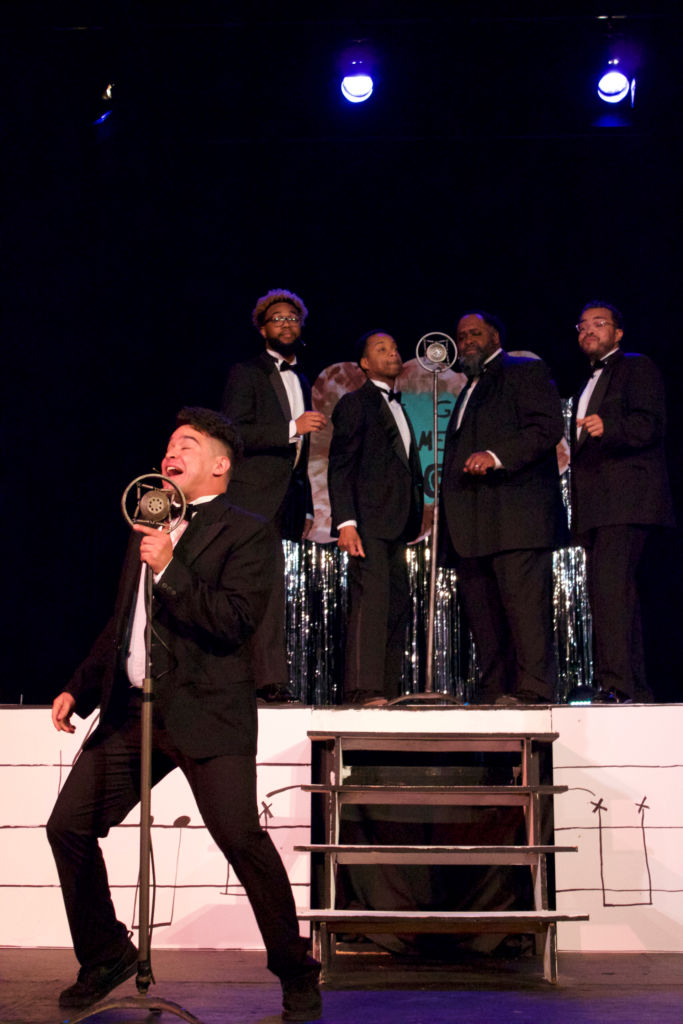 April is flush with great local theater, but there’s good reason to shuffle Five Guys Named Moe, now playing a limited run at the Black Repertory Theatre of Kansas City, to the top of your list.

Clarke Peters’ 1990 musical — based on a 1943 musical of the same name by songwriter and bandleader Louis Jordan — grins with variety-show banter and lovably corny hooks.

But it’s the Black Rep’s cast, led by director Damron Russel Armstrong, that makes Moe flow. At the press night I attended, which was the show’s final dress rehearsal, the cast had the poise and polish of an ensemble that had been singing together for months.

The musical is essentially a revue, its 24 songs stitched together with a thin thread. In the opening scene, Nomax (Armstrong) bemoans a breakup by drinking and belting along, off-key, with his antique radio. To console him, five koan-dispensing singers — all named Moe — step through his radio like the Ghosts of Christmas Funky.

The ensuing tunes run the gamut of musical tastes and tempos, blending calypso, country, jazz and jump blues. The pit ensemble, directed by pianist Pamela Baskin-Watson, grooves hard throughout, with some especially noteworthy noodling from Gerald Turner on sax.

Armstrong sings a blistering “Early in the Morning,” but it’s no insult to the veteran actor and director to say he’s the weakest singer in the cast. Each of the five Moes is exceptional, bringing a different skill or style to the proceedings. As No Moe, Christopher Barksdale Burns is intensely committed, selling the mood even when he’s singing backup. As Little Moe, Francisco Javier Villegas sings and dances with a boyish, boisterous energy that could animate a room full of corpses. And as Four-Eyed Moe, Nathaniel Rasson contributes elegant dance moves and a comical bit of clucking falsetto in “Ain’t Nobody Here but Us Chickens.”

The dance steps (choreographed by Barksdale Burns) elevate the vocals further, effortlessly reflecting the style and mood of each song. Nomax and the Moes never seem to miss a step.

Five Guys Named Moe plays at the Arts Asylum, the main theater of which underwent extensive renovation this year. The updated room is a much more pleasant place to take in a show now, with raked seating and mosaic sound baffling that’s as fashionable as it is functional.

While Wednesday night’s performance had some mic miscues and speaker fuzz, the levels were well balanced, and the singers always shone through the backing band. (The program lists local sound designer Jae Shanks as a consultant.)

The only catch: The set and lighting designs don’t yet match the polish of the ensemble — though this seems more a budget constraint than an absence of talent. Lighting designer Jamie Leonard makes the most of the Arts Asylum’s fixtures but could do with a few more toys for flashier color changes and more defined forays into the house. And Armstrong, who designed the set, costume and props himself, could simply do with a few more hands on deck. The minimal set adds smart levels with a white platform and nightclub texture with a tinsel backdrop. But the music-note paint job looks too amateurish for the company, and the transitions between songs and settings can be muddy absent strong visual cues.

At the risk of cheerleading: the Black Rep is doing professional work on a GoFundMe (literally) budget. If the ticket sales match the talent, I expect the production quality to grow along with the company.

For now, Armstrong and his cast have delivered a hell of a send-off for their inaugural season. Five Guys Named Moe is a buoyant toe-tapper with a cast that makes old standards pulse with new life.