If you’ve ever made your own calendar, or stapled together some pages of your writing for a few friends to read, or assembled a few of your better drawings for posterity, you’ve basically started down the road to making a zine.

Zine as in not-quite-magazine (pronounce it like that: zeen). As in DIY (do it yourself). As in old-school self-publication (glue, staples, late-night photocopying). As in handmade, hand-distributed remnants of the pre-Internet, pre-blog, pre-social-media landscape.

Remnants that are still bubbling up wherever people draw, write, talk and think. Zines are far from over, and anyone who makes them or loves them — or wants to make or love them — has a big weekend in store at the second Kansas City Zine Con, Saturday, September 10, inside Pierson Auditorium at the University of Missouri-Kansas City.

To put together the Midwest’s newest DIY publishing fest, four hardworking organizers have been at it all year. Jess Hogan, Amos Leager, Marc Saviano and John Sparks found each other years ago, through their individual love of zines and their involvement in Kansas City’s DIY scene. Saviano makes stickers and posters as God Bless Generica, and a zine called Operations Manual; Hogan makes the zine Stink Eye, and Leager makes one called Infoduct and the comics anthology Thingswamp. Sparks makes the poetry zine Psychophasia Poetics and No True Sleep. 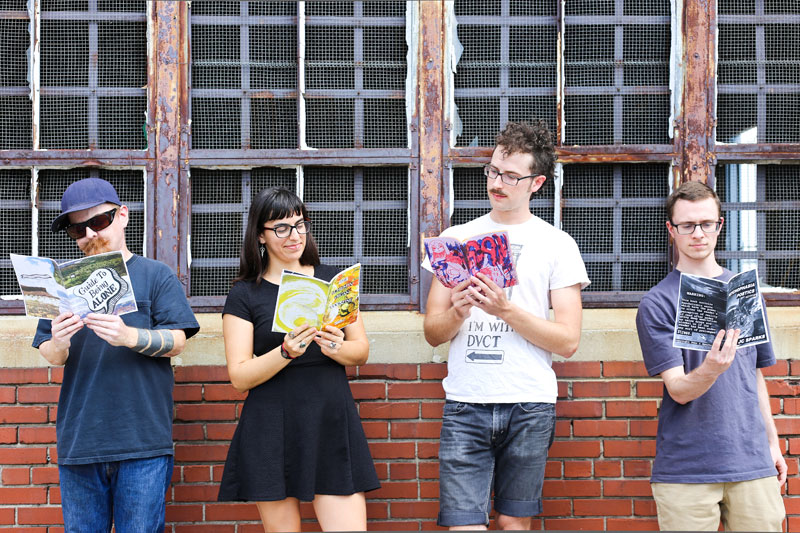 Hogan’s Neither-Nor Zine Distro, in one corner of the Holy Cow flea market, has become a regular destination for anyone seeking outsider literature, zines centered on radical politics, anarchist tactics, feminist and queer theory, not to mention coloring books, tracts on sustainability and stream-of-consciousness collages of text and image. Among the niche, mainstream-subverting zines at Neither-Nor are such witty local publications as Sorry Mom, Guide to Being Broke and Fabulous, The Schemin Vegan Cookzine, and the puzzling and playful All the Best Cowboys Have Daddy Issues.
Neither-Nor began in November 2015, when Hogan decided her zine collection was getting too big. When the old Cowtown Mallroom found a new home as Holy Cow, at 31st Street and Cherry, Hogan claimed her spot and set up stacks of her favorite zines. A brief history of the mini publications on display invites new interest from zine strangers.

“It’s important that people know they can handle the zines,” Hogan said. Though some of them resemble pieces of art, touching and paging through them are necessary to the full experience.

Hogan has touched a lot of zines — touched them all the way back to her home.

“You go to zine fests and conventions and walk away with 50 new zines,” she said. It can be hard to pass up something that might be truly one of a kind; anyone who has fallen under the zine spell knows that tracking down an older publication or author can seem impossible. “You can’t always Google the name of a zine,” Hogan said. That mystery is built into the appeal, even if it can lead to, in her case, cheerful hoarding. 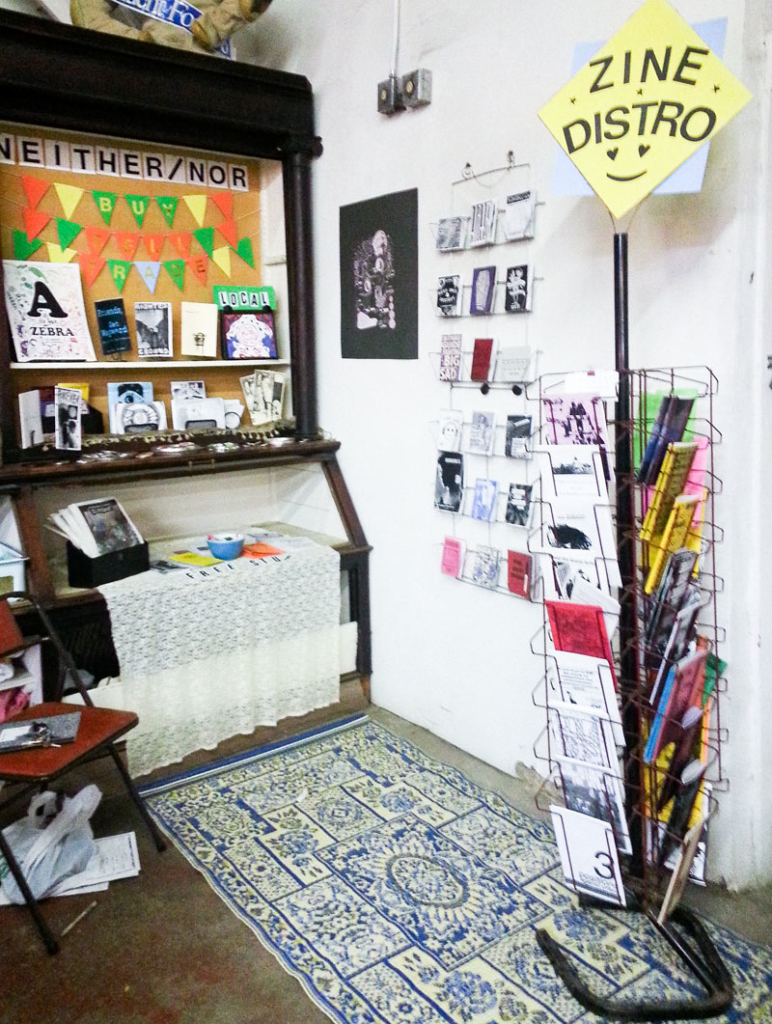 Inspired to find a solution to her own overstock as well as to how to share regional titles, Hogan and her fellow zine enthusiasts set up KC Zine Con last August. The one-day event was a success, and this year’s builds on it with workshops and live readings.

“Recently, a lot of cities started their first zine cons, and we didn’t have one yet,” Saviano told me recently. As zine culture resurfaced, following the Internet’s surge into ubiquity, it seemed unlikely ever to recover the popularity it had enjoyed in the 1980s and ’90s. But the desire to create and connect in the analog hasn’t gone away, ensuring that zines haven’t gone away — in fact, they’re enjoying a renaissance.

Still, when last year’s local con was finished, none of the four was sure about undertaking another one. Ultimately, they decided that there had to be a follow-up, so they’ve met every week since then to discuss developments and ways to make this year’s event bigger than the first.

“We’re ahead of schedule,” Hogan told me in August, comparing this year’s effort with the debut. Now the team is better organized, she said, better at planning and outreach. “We now know what works and what doesn’t.”

Hogan: “We proved [last year] there was a need for this, based on our turnout. A thousand people showed up, and there was interest we didn’t even know about.”

Indeed, the 2015 event was packed into the Uptown Theater Valentine Room for the entire day, mixing disparate groups of people for puppet shows, movies and a maze of tables layered with handmade goods.

The Zine Con isn’t an all-KC-all-the-time celebration. There’s the expected DIY version of local pride, yes, but the event is better seen as radically non-localized, a broad invitation to zine-makers all over the country. And while Kansas City is far from the first Midwest community to hold a zine convention, this one might turn out to be the farthest-reaching.

Different from the one-time Champagne fest, or the high-pedigree Chicago Zine Fest, Kansas City offers some unique advantages: a location central enough for easy travel, a reputation as a midsized U.S. city with strong art bona fides as well as a strong underground. The Zine Con team agrees there is a place for well-curated, highly selective events, but theirs is meant to open the door to a wide range of people. It’s an all-ages, all-inclusive safe space, they say, those tenets being at the core of their philosophy year-round, through a field day, a concert, an open-mic night, and various activities to help fund the event and recruit volunteers.

“It’s practice for the kind of world we want to live in” Leager said of this calendar.

The convention boasts another draw: This time, it shares a roof with one of Kansas City’s best library archives, the LaBudde Special Collections at UMKC, headed by Stuart Hinds. It’s a vibrant library, and volunteers will host four tours through the collections on the day of the event. Programs throughout the day include workshops, lectures, film screenings, children’s activities and more.

“We want people to fall in love with zines the way we all love them,” Hogan said. That seems altogether likely.