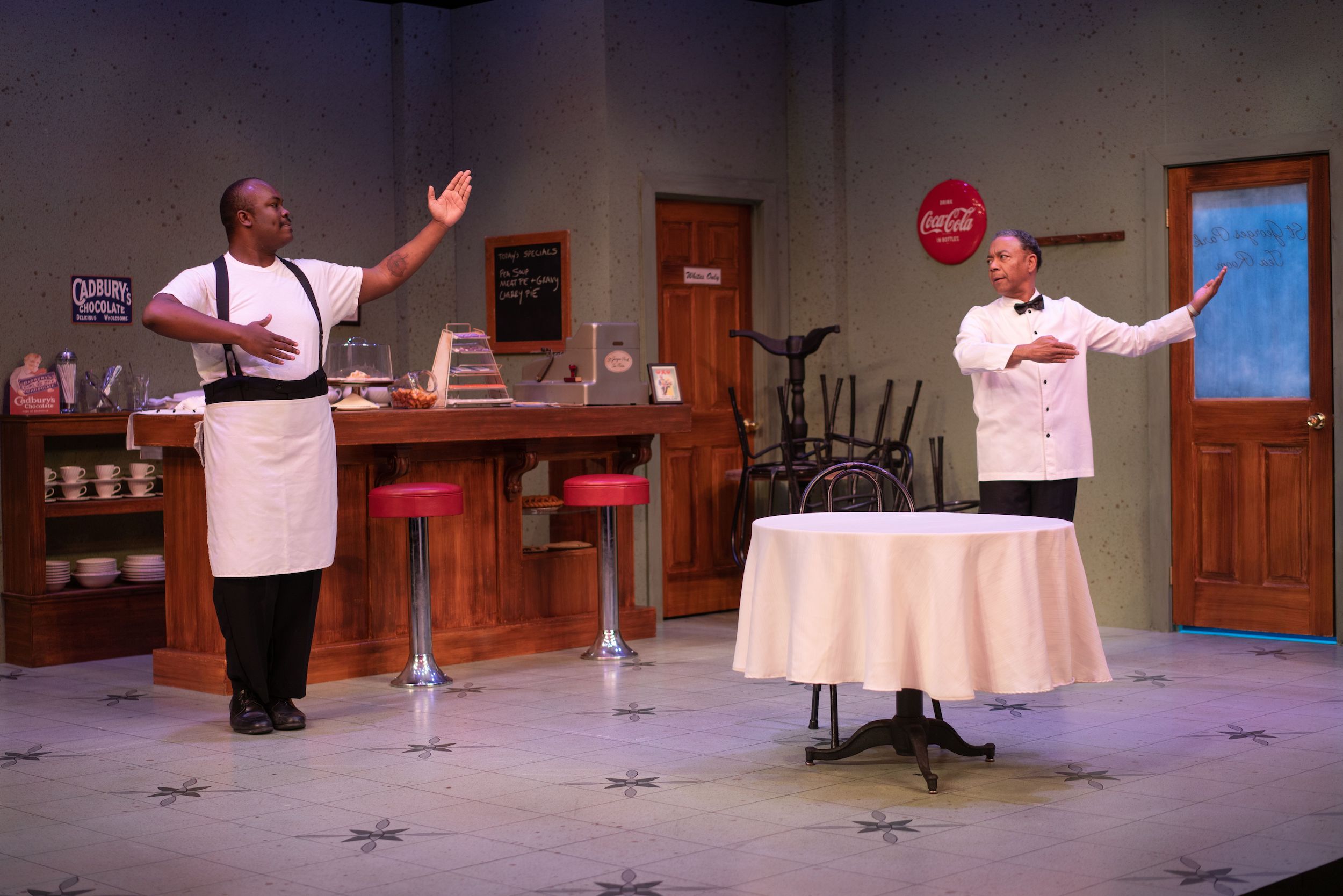 “It’s a bloody awful world when you come to think of it. People can be real bastards.” That comment in Athol Fugard’s “Master Harold” … and the Boys, onstage at Kansas City Actors Theatre, is not only true on a macro level but also an ultimately painful truth for the boy who utters it.

It’s South Africa, 1950, and apartheid has been the law for two years. (When “Master Harold” debuted in 1982, apartheid was still in effect.) Think KKK, Jim Crow laws, and pervasive white nationalism on a wider, grander scale. But this drama also reflects an insidious, less visible racism, the kind that surrounds us every day, the type that gets in under our fingernails.

Willie also practices his dance steps, with a wet floor mop, for an upcoming ballroom competition. Dance represents, for Willie and Sam, a type of freedom, a “world without collisions,” a metaphor of a better world.

When the tea room owner’s son, 17-year-old Hally (Arthur Clifford), makes his daily after-school visit, it soon becomes clear that these three share memories, a history, a personal rapport. Sam helps Hally with homework, and they discuss social reformers who have benefited humankind. But Hally sees the sessions differently: “Tolstoy may have educated his peasants,” he tells Sam, “but I’ve educated you.”

Early hints of the power structure at play become stronger statements as the story builds. Fugard’s 90-minute one-act, which takes place in real time, has the power to not just shock but also strike a nerve. His expertly crafted dialogue exposes the underlying biases that get in the way of relationships outside society’s confines.

“What does a black man know about flying a kite?” Hally says, remembering an outing with Sam years before. Stranger still, to Hally, is the fact of a white boy and a black man “old enough to be his father” flying a kite together.

It’s two worlds that Hally straddles, one with ties to Sam and Willie and one of a white boss in a society where just his skin color affords him authority. Hally also struggles with an abusive, alcoholic father, physically disabled by war, and that relationship agitates him, his conflicting feelings toward his father spewing out in misdirected and ugly ways.

Clifford smoothly navigates Hally’s swerving emotional directions, which veer from childish immaturity to adolescent rebellion and rage. Gillett projects an amiable Willie, whose sometimes quiet but solid presence acts as a kind of witness to the events occurring around him. And Coppage gives a strong performance as Sam, a focal point of this play. A servant yet a father figure, he balances sensitivity toward Hally with his character’s unshakable sense of self.

Through the skillful portrayals and artfully composed script, we recognize the personal dynamics of race at play, and are all too aware of their cost. Though “Master Harold” takes place, and was composed, during apartheid, the work holds residual power.

“Master Harold” … and the Boys