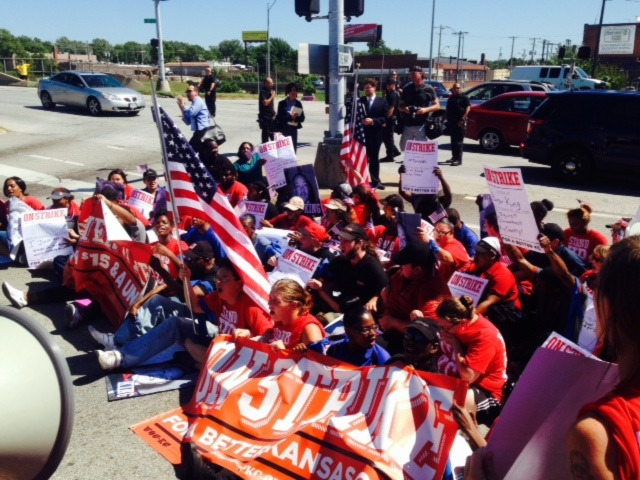 Not everything that occurred on November 8 was terrifying or demoralizing for working-class Americans. Four states approved minimum wage hikes.

In Colorado, Arizona, and Maine, the minimum wage will hit $12 per hour by 2020. In Washington, workers will make at least $13.50 per hour by 2020. Many other states and municipalities have passed similar increases.

Here in Missouri, the state minimum wage is a pathetic $7.65. On January 1, it will increase by a nickel, to $7.70. In Kansas City, local leaders’ hands are tied by a state law that prevents municipalities from adopting minimum wage increases.

“Raising the minimum wage is still the right thing to do, it’s just that we can’t do it,” said Mayor Sly James said last year. “The [Missouri] General Assembly can do it and they should do it.”

Given that Republicans have seized unprecedented control of Missouri government, though, the outlook for progress locally looks grim.

Undeterred, Stand Up KC — a chapter of the national Fight for $15 movement, which seeks a $15 an hour minimum wage and union rights for low-wage workers such as fast-food cooks, home-care workers, childcare teachers and graduate assistants — will hold strikes and protests across Kansas City on Tuesday, part of a nationwide effort that includes demonstrations in hundreds of U.S. cities.

“We’re angry. We’re in fear. We’ve had a devastating loss but we aren’t defeated,” reads Stand Up KC’s Facebook page for the event. “The attacks are coming against us all. We’ve all been fighting for $15/hr, a union, and equality for three years. An injury to one is an injury to all. Trump can’t attack any working Americans – LGBTQ, people of color, women, workers of all colors, and immigrants – without attacking us all. We’ll face and fight this together!”

Area fast-food workers will strike and hold a demonstration at the intersection of Main and Linwood on Tuesday morning at 6 a.m.

At 5:30 p.m., protesters will begin a march from 63rd Street and Paseo Boulevard. Civil disobedience will likely be on the menu.