Fantastia Fest: Tiny Tim – King For A Day is a simple yet loving tribute to an eccentric artist 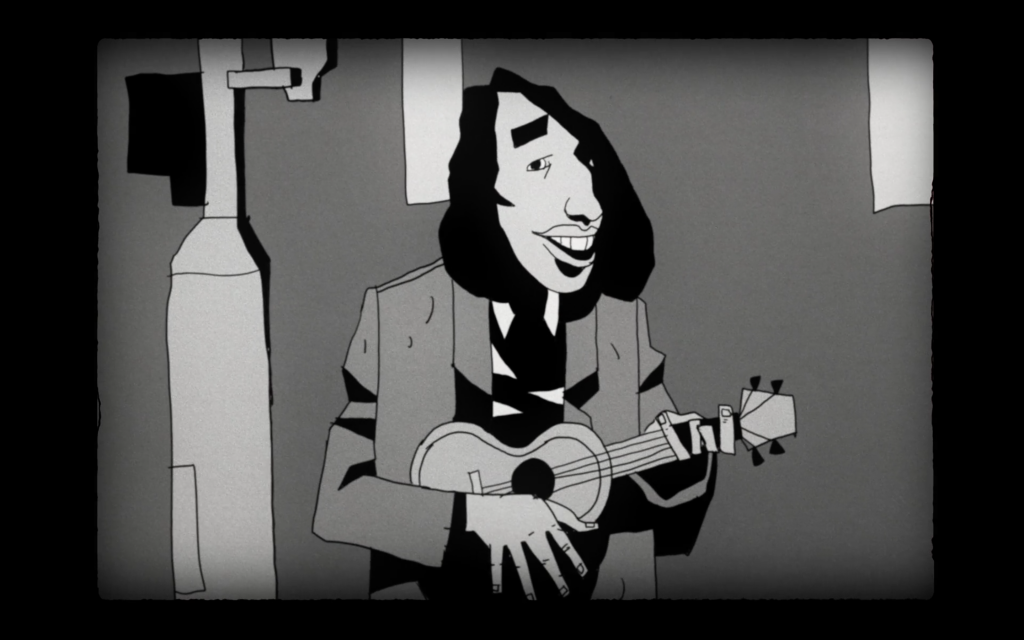 What is an artist’s legacy? What is the impact or impression they leave behind? Anytime a star or celebrity passes there are countless articles written about their memory, yet what about a decade or two down the line? Most artists get encapsulated by one moment. One stamp makes it into the history books. For Tiny Tim, it was his thrilling falsetto. Beyond that, most people think of him today, it’s through the various ways his song, “Tip Toe Through The Tulips”, shows up in movies, trailers or commercials. Yet, as Tiny Tim – King For A Day shows, there’s a lot more going on than most would expect. Painting a vivid portrait of an artist whose career stretched through the ’60s, ’70s, and ’80s.

The documentary dives deep into his history, starting of course with his origins. Born Herbert Butros Khaury in 1932, he had somewhat troubled home life. One where an interviewee describes his parents as “they had him, they cared for him but I don’t think they ever loved him”. He found a home in music, listening to records late into the evening. Spending time with a literal “freak show”, before finding a home in underground clubs throughout New York. From there it was a serendipitous catapulting to stardom, captured by filmmakers Jonas Mekas and D.A. Pannabaker. Pennebaker in particular captured Tiny Tim in his monumental Monterey Pop doc and states “he was a complete outlaw.”

The belief behind what brought about his sudden rise was that he connected with the world at a time where things were weird and people needed a release. Something to help make sense of that time & place. Which was what they saw reflected in Tiny Tim. The explosion of the ’60s was simply had the right combination of pieces, to make his brand, something for which others could grab hold of. It’s hard to tell if that’s merely a fantastical way to present it or serendipitous happenstance. In the world of Tiny Tim though, both were often one and the same.

Interviews run the gamut from friends, fans, collaborators, managers, and peers. Each with their own tales of what made Tiny Tim unique and a few that help flesh out the man behind the performative mystique. Several of which help viewers fall a bit in love with the little corner of the world he was able to carve out for himself. Besides Pennebaker and Mekas, Wavy Gravy, Peter Yarrow, Richard Barone, and biographer Justin Martell (whose book “Eternal Troubadour: The Improbable Life Of Tiny Tim” served as inspiration here) all appear. For each story or tidbit shared (even the less than glowing one), there’s a protective aura to the speaker’s cadence. As if, even years after his passing in 1996, they’re worried about people wanting to take advantage of him.

Director Johan von Sydow has access to hours and hours of footage and photos of Tiny Tim to comb through, in order to paint his picture. The secret weapon though, is the inclusion of his diaries, as narrated by Weird Al Yankovic. They provide special insight into what made him tick. The battles within his psyche and the performer who had to put on a face. Changing both at the whims the felt necessary, as well as the perception of what people wanted or needed him to be. Something highlighted in simple and beautifully crude animated transitions.

Besides those diary pieces, the almost absurd amount of television clips are what seal the deal. Stories and strolls down memory lane are one thing. Getting to witness the magnetic effect Tiny Tim had on an audience, is another. Their inclusion is tantamount to King For A Day‘s success. You witness firsthand the transformation from curious oddity to special guest staple to having his own television special. Yet underneath this, there are moments of an artist striving to grow out of what everyone wanted him to be. One of the best moments comes while at a career-high, but personal low, changing up his singing style to something more traditional and old school. It’s a moment that stuns Johnnie Carson, of all people, dolling out the kindest of compliments, while totally shocked. It’s great.

Of course, any story of an artist that unfortunately is partially forgotten by the ravages of time, the story takes a turn. Echoing a strange parallel to his beginning, Tiny Tim spends time in his later years touring with a circus. You can’t help but feel sorry for the slip, as the toils of grinding away beat on and bear down on him. The fall is hinted at, but part of it seems like a change in culture couldn’t find the same place for a personality like his. Or at least not in the way in which he captured previous audiences. A fact that befalls too many musicians. Where the desire to remain relevant or to keep making money reaches a nearly exploitative state.

As fascinating a subject as Tiny Tim is, what holds King For A Day back from being something truly special, is the decision to gloss over a few of the more tantalizing threads that get teased. Possibly mob connections. Three marriages. Sexual fluidity. Questionable repeated behavior. Each gets brought up for a minute or two, before being abandoned altogether. Either due to a lack of documentation on those subjects or a reticence to dwell on those items. The later is a strange choice, as their brief inclusion helps fill in a fuller picture of a character, while still staying an arm’s length away. It doesn’t completely derail the documentary, but just feels like a missed opportunity to dig deeper.

Ultimately, Tiny Tim – King For A Day is a loving snapshot of a cultural figure, who loomed larger than most might expect, for almost 30 years. Though at times it only scratches part the surface of the man, there’s an inherent sweetness to the documentary, that helps it coast along, for it’s just over an hour runtime. If not for anything else, it’s a reminder of how time plays a factor in one’s legacy. A person that makes an impact to one generation, can be reduced to a simple sentence in a history book or internet entry. Thanks to works like this, their star, warts and all, is allows to shine a little brighter, decades later.