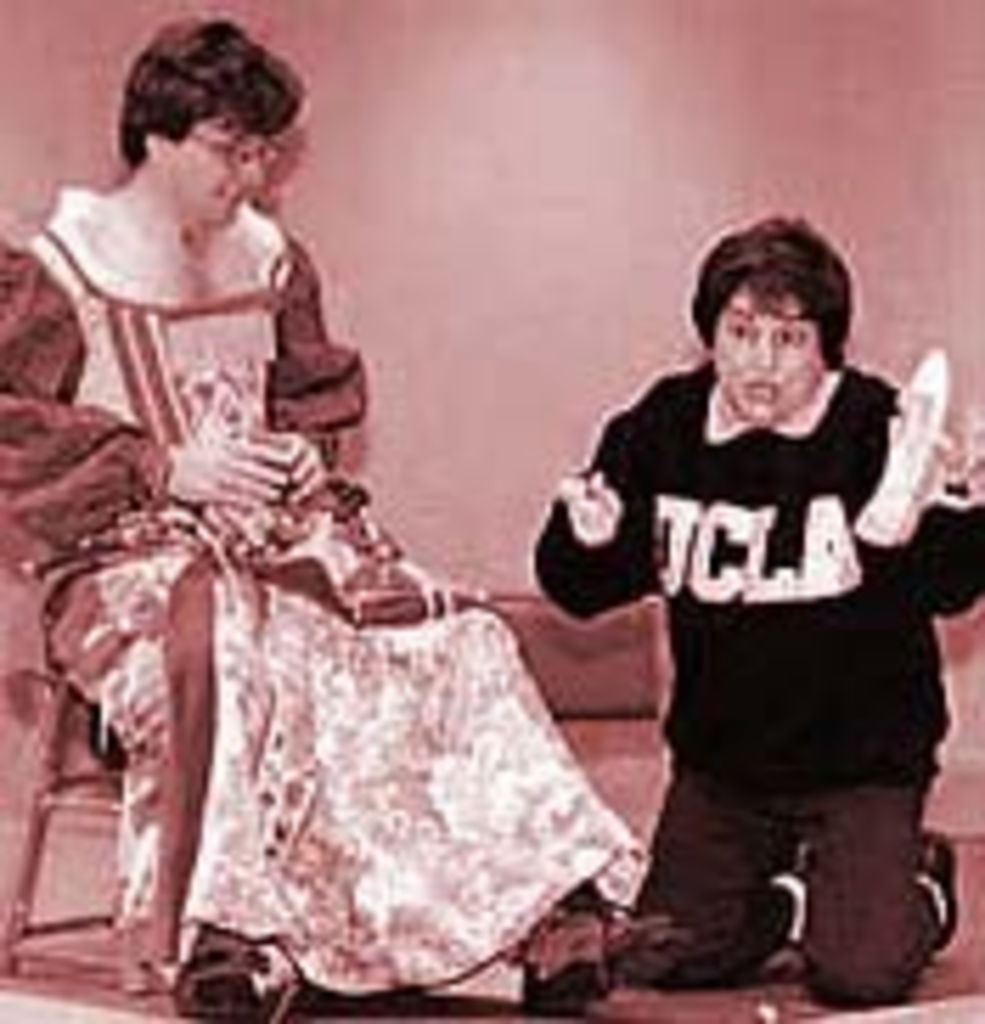 Remember being so gullible that you believed that out of every maiden who attended the ball, the glass slipper could fit only Cinderella’s foot? Or that Little Red Riding Hood did not know it wasn’t her grandmother who had the big eyes, hands, and teeth? As a child, one is first introduced to life’s little lessons through literature such as the classic tales of Cinderella and Little Red Riding Hood. These stories always end up just right to protect a child’s innocence, at least until they are exposed to an entertainment industry such as today’s; one that is tainted by themes of death, greed, and corruption. The Jewish Community Center‘s take on Stephen Sondheim’s musical Into the Woods offers an opportunity to remember the innocence of childhood fairy tales and the positive lessons to be learned from them.

Into the Woods is a remarkably creative story that blends a number of Grimm’s fairy tales: “Jack and the Beanstalk,” “Cinderella,” “Rapunzel,” “Little Red Riding Hood,” “Snow White,” and “Sleeping Beauty” are interwoven into an exciting and suspenseful adventure. Sondheim’s adaptation, derived from James Lapine’s book, blends fables that undoubtedly supplied the seeds of many a children’s literary foundation. The musical provides the perfect mixture of humor, suspense, and drama. The characters’ stories are intertwined when a baker and his wife — who are unable to have children — find themselves living next door to a wicked witch. The wicked witch, who also happens to be Rapunzel’s mother, promises the childless couple an opportunity to procreate successfully on the condition that they bring her a lock of golden hair, a red coat, a white cow, and a golden slipper. In pursuit of the precious items needed to bear a child, the couple goes “into the woods” and crosses paths with the famous personalities we all know and love. Unlike a typical fairy tale, however, things do not go as well as planned: Lives are sacrificed and love is lost and found. Still, in the tradition of preserving the innocence of childhood, a lesson is learned, and the ending leaves the audience with that indescribable feeling that only a fairy tale can generate.

With all the beauty and poise of Cinderella, Kristi Mitchell’s voice rings so beautifully, one almost believes she can converse with the birds. Playing a not-so-typical Cinderella, Mitchell charms both her offbeat prince and the audience’s eyes and ears.

Cinderella’s atypical Prince Charming gives a Monty Python-esque performance that is genuinely humorous and witty. His exaggerated motions and expressions — while providing a comical edge to his unusual princely character — are complemented by a seriously operatic singing voice.

Jay Coombes performs in a lead role as the Baker. Although Coombes sufficiently plays his part, it seems as though more enthusiasm could have been expressed in a role so crucial to the plot’s development. As a couple, he and his wife seem to be an unlikely match. His mismatched wife, Stasha Case, was perfectly cast for her role, her powerful voice making it seem as though the light that follows her around the stage is of her own creation.

Just as cute as can be, Cara Fish provides a delightful depiction of a twisted take on Little Red Riding Hood. Her sweet vocal performance brings identity back to this not-so-sweet form of the innocent little girl who, in this case, has no fear of the Big Bad Wolf. Jonathon Andrews is the wolf who’s lost the ability to scare the little red socks off the girl he can’t wait to devour. Andrews’ wolf costume is anything but scary — he looks awfully similar to Michael Jackson when he turns into a werewolf in the video for “Thriller.”

Curt Crespino is Jack of Jack and the Beanstalk. He portrays a wimpy little Jack who has difficulty parting with Milky White, the cow he ends up trading for the magical beans. Although his skilled acting provides for a successful depiction of the mama’s boy who gets into mischief, Crespino’s pipes could use a bit of fine-tuning.

The production featured a live orchestra consisting of piano, trumpet, trombone, and percussion. Their sound complements the play beautifully. Although visible onstage, the orchestra’s presence does not detract from the play’s ambience.

As the title suggests, the stage design was that of a wooded forest. Its scenery was well constructed and simple but effective. The wardrobe appears to be composed of some professional-looking costumes and compilations of clothes found in people’s basements, yet it suits the play’s eccentric character.

Into the Woods provides an opportunity to remember the child in us, the one who didn’t need to witness explosions, gunfights, and bloody limbs flying through the air to be entertained. Rather, it provides a lesson in innocence and the importance of its preservation, to ensure that the simplicity of children will always make them gullible enough to believe that fairy tales are true.