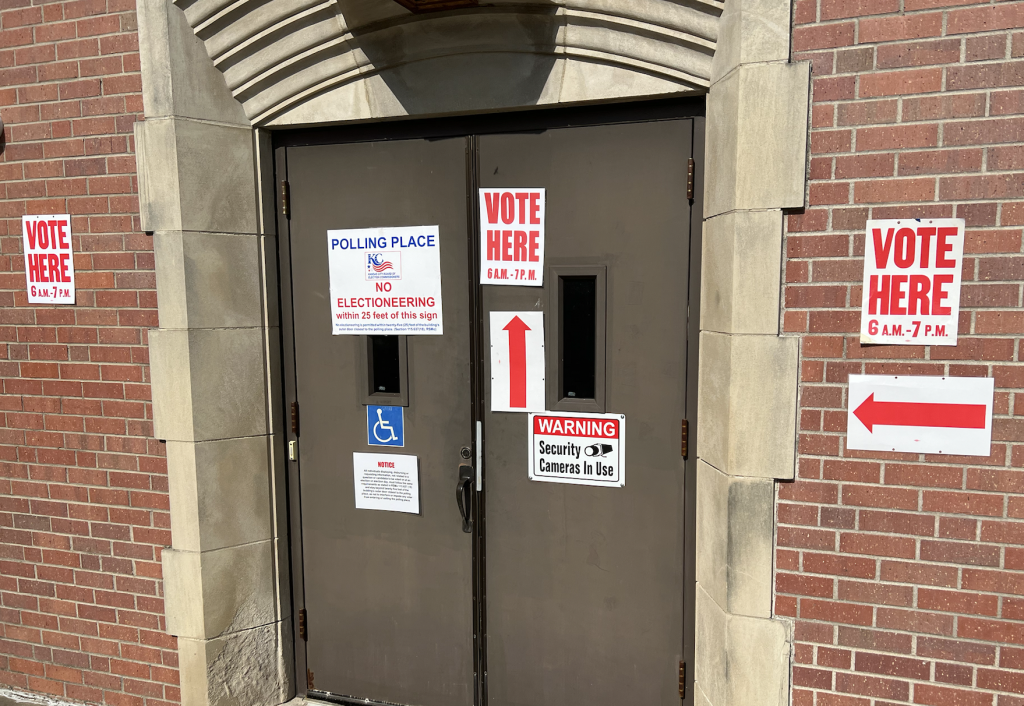 TFW you still aren’t sure where to vote. // Photo by Brock Wilbur

Amid a severe heat warning by the National Weather Service and fresh on the heels of the year’s most impactful Supreme Court decision, voters in both Kansas and Missouri are showing up in record numbers to participate in the country’s most critical primary elections.

As we crisscrossed the metro on both sides of the state line today, a few constants carried over location by location.

The afternoon heat peaked at 97 degrees in Wyandotte County, but voters braved the unforgiving sun for the Aug. 2 primary election.

Across the street from the Haven Baptist Church in Piper, Kansas, a blonde woman pulled onto the roadside and shook a Lynn Melton sign at passing vehicles.

Inside the church, air conditioning refreshes the snaking lines of voters as they prepare to cast their ballots.

“I’m for choice,” Wyandotte County resident Mildred Watson says. “I just think that they [the Supreme Court] need to rethink the situation and find out what the women want because it’s their choice.”

Watson says she believes that Governor Laura Kelly has done a great job under difficult circumstances. Although fellow resident Bill Lynch agrees that times are tough, he finds the state’s leadership to be too liberal.

“I think it’s good that so many people are coming out to vote,” Lynch says. “It’s too bad that it takes such a divisive thing to bring them out to vote, but there seems to be a lot of passion.”

Samantha Kulinski has brought her two young children to the polls. With a baby strapped to her chest and a toddler holding her hand, she says that everyone has to vote for themselves.

“I can see how it would impact women if they had a health reason,” she says. “I can see how women are concerned about that. I do think that having children really impacts your decision. I do think that abortions in the late term are kind of like murder. I mean, it is murder in my opinion. I understand for rape victims, but I’m for finding out early.” 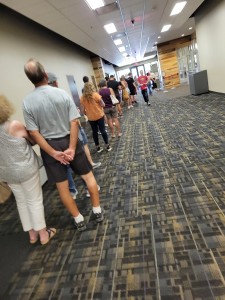 The mid-point of an hour long wait to vote in JoCo. // Photo by Michael Mackie

College student Dawnyale Bruce says that outlawing abortion will not only impact her but also—eventually—her young nieces.

“I feel as though people don’t understand, especially older men, that it should be our choice,” she says.

Johnson County voters are keeping their opinions closer to their chests, even as they show up in droves. The wait at Shawnee Town Hall was over an hour long, making it difficult for workers to vote during their lunch breaks.

Several would-be voters left before casting their ballot due to the line.

“This is their way to keep people from voting,” one man says on his way out. He’s talking to no one in particular, but a couple on their way inside stop and pivot in his direction. “They only put two to three machines in there at once.”

Two older residents fan themselves from the heat and complain about their difficulties in finding their polling location.

Eliora Sorkin was willing to bear the wait for the opportunity to save choice.

“Well, I mean, it’s all about female autonomy. I want to have the right to my own body and make the choice for myself in the future,” Sorkin says. “I want to make sure that if I’m in a situation where there’s a health issue and the baby won’t make it or I won’t make it, I want to be able to make that decision for myself to save my own life.”

A Catholic voter from Olathe who wishes to remain anonymous says that the decision to vote yes or no should be based on logic.

“Has anyone thought about the financial repercussions for this?” she says. “The financial resources needed if the yes vote prevails? How are we going to support all these children if people don’t want them?”

Her husband chimes in: “You also have to consider medical expenses.”

“No law can be absolute when it comes to a person’s personal freedom,” her husband says.