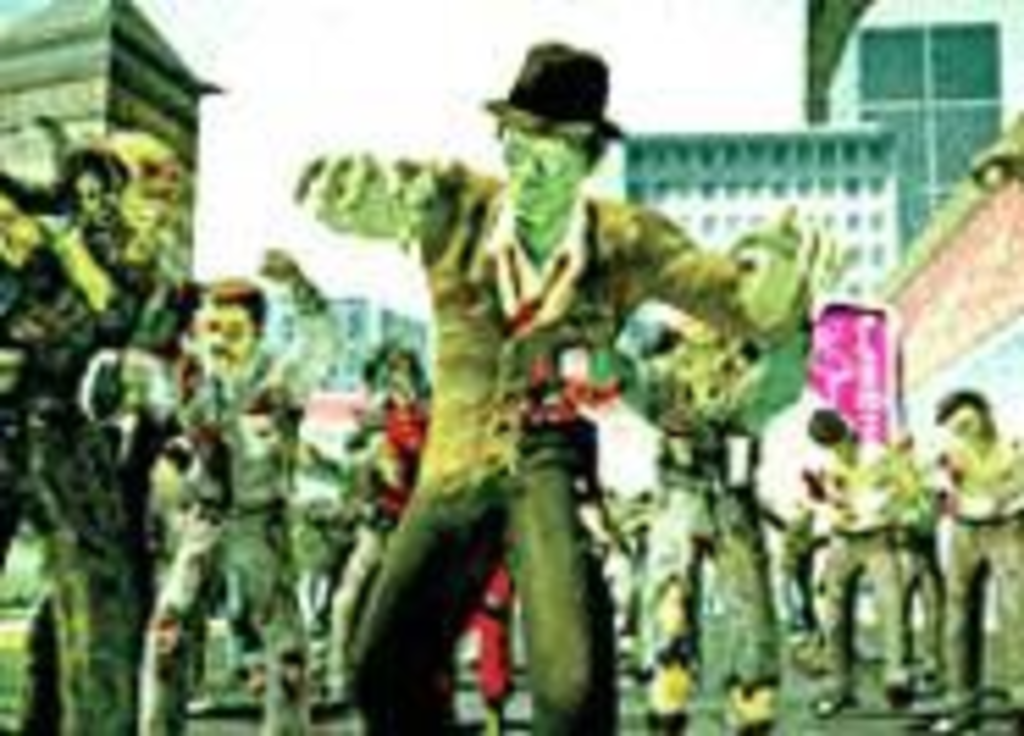 Pity the video-game zombie. He spends his short afterlife dodging self-righteous heroes hell-bent on peppering him with buckshot, setting him on fire, or blowing him to smithereens with a bazooka. Well, Stubbs is here to even the score.

Set in the 1950s, Stubbs the Zombie casts players as the eponymous zombie, a door-to-door salesman who rises from the dead after a goofy, “World of Tomorrow”-type city is erected on his grave.

Time to kick ass and take names? More like pass gas and eat brains. Stubbs possesses some of the most unorthodox attacks ever seen in gaming. He cuts fetid zombie farts that leave humans reeling, then cracks open their skulls and slurps out their brains like he’s shucking oysters. He can also hurl his rotten organs like grenades and use his detachable hand to possess people. And if all else fails, Stubbs simply beats people into submission with their own torn-off limbs.

All this provides some amusingly grotesque game play, but what makes it challenging is that Stubbs is — despite his many talents — just a zombie. He shambles slowly down streets as an entire city attacks him. The first few levels of near-helpless civilians eventually give way to impressive armies of local cops, militia hicks, and scientists toting ray guns — all of whom want to end Stubbs’ brain-eating bender. Even tanks get into it.

Lucky for him, Stubbs can even the odds by recruiting help, in the form of human victims who rise to join his legion of zombies. Individually, they aren’t very useful, but en masse, they’re overwhelming. This gaming mechanic is the real meat of the game: Get some zombies together, and send your decomposing brethren out to wreak havoc.

The strategic aspect really comes through in the game’s two-player mode, where you and a friend attack the city as a team, allowing more complex tactics than are possible with computer-controlled drones. (“Hey, buddy, try to distract the tank, so I can get close enough to fart on it.”) Unfortunately, co-op is the extent of the multiplayer options — competitive and online modes are absent.

But what really shines is the game’s twisted sense of humor. When attacked, victims scream out lines like “It’s chewing my BRAAAAAIIIIINNN!” with over-the-top gusto. A heavily-armed barbershop quartet harasses Stubbs with high-tech weaponry and merry four-part harmonies about how they plan to kill him. And storming the police station results in the Chief of Police challenging you to a dance-off.

Weird? Clearly. But in a game that involves eating hundreds of people’s brains, “weird” is par for the course. And the soundtrack — ’50s classics performed by modern bands, including “Earth Angel” by Death Cab for Cutie — is pitch-perfect.

Stubbs does miss a few marks, though. Aside from the thin multiplayer offerings, some levels are so huge that it’s hard to tell what you’re supposed to do next. And the game’s filter effect — meant to give it the grainy look of hoary classics like Nosferatu — wears thin quickly. An option to turn it off would have been appreciated.

Still, those minor quibbles don’t change the fact that Stubbs is a solid, innovative game that’s fun to play, especially with a friend. Cross your fingers for a sequel. This is one zombie who deserves a second life.