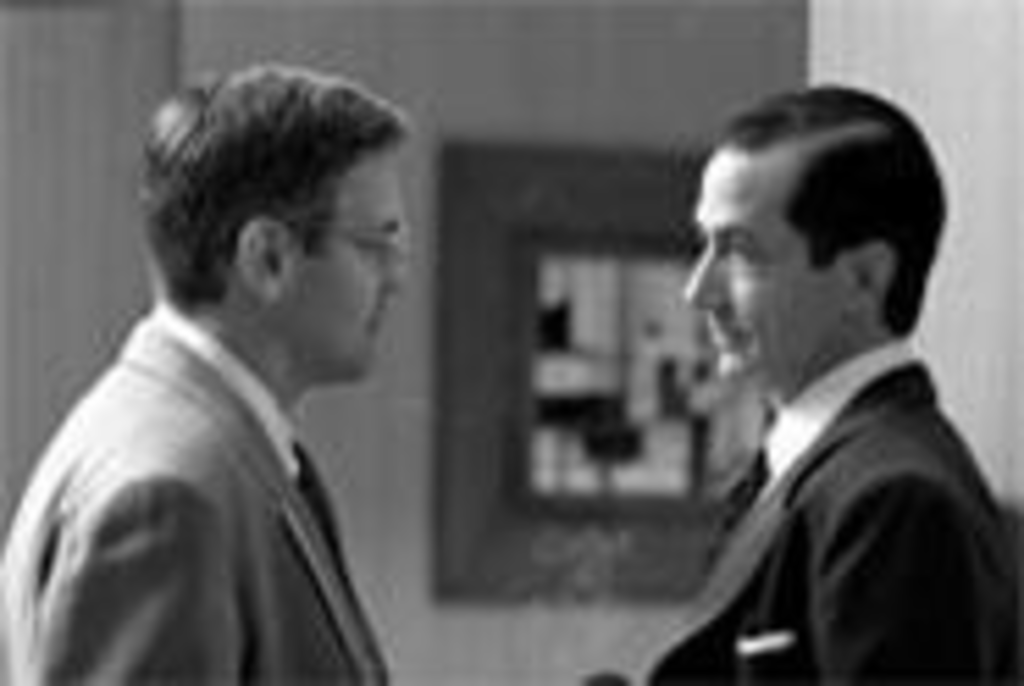 Good Night, and Good Luck, a riveting movie that’s as entertaining as it is socially and politically important, is more than just the right film at the right moment. George Clooney’s sophomore directorial effort is dynamic filmmaking: brilliantly conceived, visually arresting, beautifully acted, emotionally engaging and intellectually stimulating. Many films try to create the sense that the audience is right there with the characters; this is one of the few that succeeds.

Set in the early 1950s, Good Night chronicles the real-life conflict between Edward R. Murrow, host of the popular CBS news program See It Now, and Sen. Joseph McCarthy, who employed fear, intimidation and outright falsehoods in a crusade to root out alleged Communists from every walk of American life. Ignoring threats to his own career — not only from McCarthy but also from network executives and corporate sponsors — Murrow (played by David Strathairn), working with producer Fred Friendly (Clooney), reporter Joe Wershba (Robert Downey Jr.) and other intrepid CBS news personnel, exposed the erroneous claims and scare-mongering tactics of the junior senator from Wisconsin. The three See It Now broadcasts that focused on or touched upon McCarthy proved a turning point in the senator’s downfall and, to this day, remain high-water marks in the history of television journalism.

The well-structured screenplay by Clooney and Grant Heslov assumes a basic knowledge on the part of the viewer and never talks down to its audience. Cinematographer Robert Elswit’s stunning black-and-white photography lends the sense that we are actually in the 1950s and allows the seamless integration of archival footage depicting the key historical figures, including McCarthy himself. (The fact that nearly all of Good Night, and Good Luck takes place indoors undoubtedly helps the filmmakers sustain the illusion.) Large swaths of the film consist of the actual Senate hearings, but this material is interwoven so well with the rest that you’re halfway through the movie before it hits you on any sort of conscious level.

The acting, too, is top-notch across the board, though it takes awhile to figure out who all the characters are. Strathairn, who walked off with the award for Best Actor at the recent Venice Film Festival, projects all of the gravity and dignity of Murrow as well as an almost tangible sense of tension. A chain smoker who hardly ever cracks a smile, the veteran newsman always looks as though he has the weight of the world on his shoulders. Certainly he seems keenly aware of the stakes here, which involved far more than his own career. Nor did Murrow spare his own profession; he lambasted other reporters for not living up to their responsibilities in a democracy. In fact, the film opens and closes on an openly critical speech that Murrow delivered at a 1958 convention of radio and TV news directors.

For a film dealing with such a serious subject, the amount of humor is unexpected. From darkly ironic to laugh-out-loud funny, it infuses the film. Clever and intelligent, Murrow and his team were quick with witty observations; the extroverted Friendly gets some of the best lines, and Clooney pulls them off effortlessly. Kudos also to Downey Jr. and Patricia Clarkson (as his wife), the only two characters whose private lives are shown.

Must-see movies don’t come along very often, and Good Night, and Good Luck is definitely one of them. Provocative, diverting, lively and funny, it also has the perfect balance of humor and drama. A civics lesson packaged and sold as entertainment, the film and its message are as relevant today as they were 50 years ago, a vital reminder that “eternal vigilance is the price of freedom.”